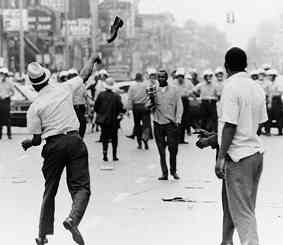 The 1967 Detroit Rebellion began unexpectedly. Still, it should have been anticipated. At 3:45 a.m. on a still scorching hot early morning on July 23, 1967, cops raided an all black, after-hours drinking spot, locally called a blind pig, and began roughly herding patrons into police wagons.

This was no different an occurrence than had happened numerous times previously. The Detroit police were roundly hated by black people as a white occupation force staffed by corrupt and brutal racists who routinely made life even more miserable for a mostly impoverished community. Normally, arrests and police harassment went unanswered.

This time it was different. The Rebellion erupted in Detroit, as it did in so many other cities, because of systemic discrimination in all sectors of life for black people and unrelenting police brutality.

Bill Scott, son of the owner of the illegal drinking establishment, saw not only his father’s patrons being pushed into police vehicles, but witnessed the usual disrespect and unnecessary force being used. Scott made history with a beer bottle he threw at a police sergeant. It missed, but it had enough social force behind it to ignite one of the most destructive and deadly urban uprisings of that decade.

When it was over, almost four days later, the toll was 43 dead, 1,189 injured, over 7,200 arrested, and more than 2,000 buildings destroyed, nearly all in the area then called the ghetto. The city has never completely recovered from the events.

White racist cops and Michigan National Guardsmen, the latter untrained and unfamiliar with the city, were responsible for almost all of the deaths, many of which can be categorized as summary executions. Reports of snipers and black armed resistance flew about, including in this publication at the time, but remain as only rumors, and wishful thinking in some quarters.

Denied the wages necessary to purchase the glittering commodities beckoning for consumption, it is estimated that 10,000 people turned inner-city businesses into what was called in the 1960s, a giant Free Store. Another 100,000 are said to have watched the action, and considered it all great sport.

Detroit’s mayor at the time expressed horror as he witnessed first hand what he called “a carnival-like atmosphere,” as multiracial groups of looters made off with everything that wasn’t nailed down and often set fire to hated businesses.

The Guard brought in tanks and half-tracks with mounted machine guns in an attempt to bring back capital’s order, wildly discharging tens of thousands of rounds of ammunition to the point where military units blocks away thought they were under assault from armed bands.

With the city still ablaze and the Guard running out of bullets, President Lyndon Johnson sent in the racially integrated U.S. 82nd and 101st Airborne Divisions; many of these troops had seen combat in Vietnam and now found themselves in a similar war at home.

The Fifth Estate, in 1967 not even two years old, was in the midst of things. The then biweekly tabloid’s office near Detroit’s Wayne State University, was intentionally tear gassed by the National Guard, and the paper’s editors were threatened at gunpoint by a soldier growling, “I know who you are; get out of here,” as the two tried to enter a Guard bivouac point with press credentials.

See also in this issue: “Excerpts from a Rebellion: How the Fifth Estate Reported It” and “How White Supremacy Progresses”

For FE issues following the July 1967 Rebellion are available at FifthEstate.org/archives. Click on issue #31 to begin.