A Fascist by Any Other Name
Donald Trump

In the streets of Washington DC on Inauguration Day, Black Bloc protesters notoriously smashed windows and set a limousine on fire. Fortunately, I wound up on the other side of the police lines when the cops sealed off the area and herded some 200 into pens of metal barricades, where they were kept waiting in the cold for hours before being hauled off to jail. 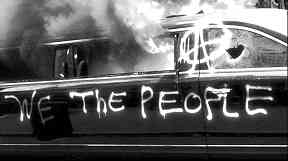 Nothing draws a crowd like a burning limousine. This one torched by demonstrators during the protests at the Trump inauguration, Jan. 20.

The surrounding streets were filled with less militant if more colorful protesters. Two young fellows held aloft a big banner with a reproduction of a frame from a 1940s comic book showing Captain America slugging Hitler. The caption read: “Fighting Nazis is an American tradition! Stop the ‘alt-right’!”

The radical right is now ensconced at the highest levels of power in the US government, and is emitting an increasingly fascistic stench. President Trump officially declared the day of his inauguration a “National Day of Patriotic Devotion.” The US military apparently nixed the Trump team’s request to have tanks and missile launchers rolling down his parade route, but the president is still looking forward to such spectacles. The military “may come marching down Pennsylvania Avenue,” he boasted after the inauguration.

Trump rhetoric seems to be consciously reviving that of the fascist era. The phrase “America First” is all over the White House website—whether or not it has been consciously appropriated from Charles Lindbergh’s pro-Nazi movement of the 1940s.

But do the trimmings make for the real McCoy? Is Donald Trump an actual fascist?

The fact that this question has been subject to media debate is a healthy sign—the idea that a fascist is at the helm of the empire has entered mainstream discourse. But we hear over and over that, no, he is not a fascist. He’s a “right-wing populist”—as if these were mutually exclusive categories. Fascism is but the most extreme manifestation of right-wing populism. The question is not whether Trump is one or the other, but how close to the fascist end of the spectrum he has progressed.

Some anarchists and voices on the far left have also balked at the F-word. The anarchist collective Crimethlnc asked, “Does Trump Represent Fascism or White Supremacy?” They conclude: “Fascism is Obsolete since 1945; Whiteness is Here to Stay.” They even assert that there is “nothing fascist about Trump.”

This again misses a critical point. Whiteness has, indeed, been a permanent condition in American politics. Whiteness being harnessed to an aggressively reactionary political program at the highest levels of power is what’s new—reactionary in the technical sense of seeking to reverse and avenge erosions (real or perceived) of the order of privilege and power.

The left evinces twin errors where the label fascism is concerned. One is using the term so rigorously that it has no utility in describing a social phenomenon. The real hairsplitters even say Hitler was National Socialist not fascist, that only Mussolini was the real fascist.

The differences are real: the Fuhrer’s glorification of race versus Il Duce’s exaltation of nation. But they were part of the same reaction against advances by communists, anarchists, and others who sought a revolutionary way out of Europe’s inter-war crisis.

The opposite error is to use the word fascism like a club to beat on anything we don’t like. This error was displayed by those who called Hillary Clinton a fascist because she represented a merger of state and corporate power. (As does Trump.) This was a characteristic of fascism, but not the only one. The violent rejection of liberalism and democracy was fundamental.

Even those who do not display either error often reify fascism to the point that they cannot recognize it in updated context and garb.

We are told that the US does not face nearly the degree of economic crisis that Weimar Germany did when Hitler came to power. This ignores the fact that Italy faced no such crisis in 1922 when Mussolini triumphed. It also ignores how the aspirations of the downwardly mobile US middle class have been betrayed by free trade, producing, if not desperation, certainly resentment that can be exploited by white nationalism. Trump’s voters were fed ethnic scapegoats for their reduced economic prospects—a classically fascist response.

Demanding an inflexible analogue to the Weimar Republic in Germany also overlooks the reality that in the contemporary US whiteness is under attack. The imminent demographic tilt away from a white majority and the perceived humiliation of relative advances for Blacks also provide a backlash that can be exploited by fascism.

The fascist threat we now face in the US is less ideological than the classic model. Unlike the fascism of Hitler and Mussolini, it shows not a trace of economic populism, apart from rejecting free-trade agreements and offering unlikely promises of returning industrial jobs. Indeed, it glorifies the most vulgar flaunting of wealth, and pledges to undo the last remnants of the New Deal reforms of the 1930s.

But all the essential ingredients are there: ugly ultra-nationalism that seeks to correct perceived humiliation, xenophobia and demonization of the Other, exaltation of the great leader, fetishization of violence, and a populism tinged with anti-Semitism.

There are some obvious divergences from the classic fascist model. Unlike Hitler and Mussolini, Trump built no paramilitary movement before taking power, although right-wing militias may yet operate on behalf of his machine.

But there is little doubt that Trump is marching there. Here is where his fictional terror attacks could be critical. If there is a “Reichstag Fire,” in this case, a terrorist attack (authentic or staged), especially one attributed to a Muslim immigrant, we could find ourselves moving quickly toward something resembling actual fascism.

There is obviously a struggle going on within the US intelligence community between those elements with some commitment to bourgeois-democratic norms and those ready to embrace Trump-fascism. If the latter emerge victorious, Trump will be a giant leap closer to realizing his dictatorial dreams.

And, this may touch on the reluctance of many people to call the new fascism by its name. It gets back to the dichotomy I witnessed in the streets of DC between the Black Bloc and protesters who saw their anti-fascism in patriotic terms. Anarchists especially may balk at recognizing fascism for fear of legitimizing bourgeois democracy—of being on the same side, even if by accident, as Democratic politicians and elements of the intelligence community.

The challenge in the coming period will be to organize effective, tactically astute resistance that does not compromise our independence from the Democratic Party or our critique of capitalism and state power. And, more ambitiously, to do so in a way that will open windows of possibility for a revolutionary way out of North America’s current crisis.