A second Convergence Against Toxic Prisons will take place June 2–5, 2017 in Fort Worth, Tex., the city where the Carswell Federal Medical Center is located. The gathering will feature speakers, panels, workshops, protests and cultural activities, including an art show and hip-hop performances, and demonstrations. 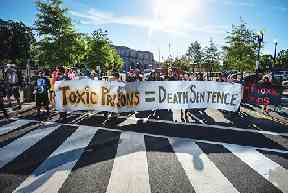 A major focus of the convergence of prison abolition activists will be kicking off the Close Carswell Campaign. The prison’s special Administrative Unit is the current residence of prominent voices from the inside such as Marius Mason and Ana Belen Montes. The facility has faced years of scrutiny for its extremely restrictive policies and poor conditions which have never been addressed by the federal Bureau of Prisons.

This year’s events are a continuation of those of last June, when activists and revolutionaries from across the country gathered in Washington D.C. to explore the intersections of the environmental movement and the struggle to end mass incarceration. (See FE #397, Winter 2017, “June 11th: Eco-Resistance, Prisons & the Making of an International Anarchist Day of Solidarity.”) It highlighted the role of political and social prisoners in bringing this cross-movement analysis to the forefront.

Two hundred participants, including former prisoners, took to the streets of the Capitol with banners declaring support for those yet to win their freedom. They blocked the entrance to the Bureau of Prisons and then the major intersection between the FBI and the Department of Justice.

“It was an amazing display of intersectional solidarity,” says Panagioti Tsolkas, a convergence organizer. “And, we’re doing it again this June, in Texas.”

Environmentalists know Texas as the financial headquarters of the oil and gas empire that controls the nation’s political system, where fights against pipelines like Keystone XL and Trans-Pecos have captured the attention of the nation.

Prison abolitionists know Texas as home to one of the most brutal and corrupt state prison systems in the country.

The facility is designed to house female prisoners who have special health-related needs, but only a small percentage receive medical treatment. Over 1,500 prisoners are currently housed in Carswell which is surrounded by toxic military Superfund sites from the Air Force base with which it shares the area.

Site information and a list of events is available at FightToxicPrisons.org, and facebook.com/events/641359922717062.