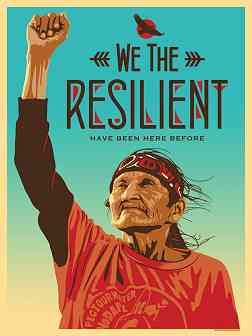 Poster: Ernesto Yrena. One of many available for free download at theamplifierfoundation.org. Hundreds of them were put up all over Washington for the Trump inauguration.

Now that Donald J. Trump has brought bogus right-wing populism back to the White House and Congress is under firm Republican control, serious talk about gutting Social Security and Medicare is again coursing through Washington.

This is, as Trump would say, yuuuge. Social Security and Medicare are the two biggest and most critically important public programs in the country. Over 65 million retirees, spouses and children of deceased workers, and disabled persons receive Social Security benefits every month; some 55 million retirees receive hospital insurance coverage under Medicare Part A. If these programs didn’t exist, tens of millions would be plunged into poverty.

But why, as anarchists, should we care especially about Social Security and Medicare?

Don’t they just make working people more dependent on government and less motivated to develop structures of cooperative care that don’t make them dependent on the State and the money economy?

Shouldn’t we instead focus on creating cooperative networks that we control and that can’t be snatched away by right-wing politicians?

Many anarchists—and even conservative trade unionists like Samuel Gompers—asked these questions a century ago, when the idea of universal old-age and health insurance was first being explored in the U.S.

The answer is that these programs are not so simple. Social Security and Medicare Part A are forms of social insurance. Workers contribute a portion of their wages, which earn them the right to a guaranteed income and health coverage once they hit old age.

Social insurance programs of various kinds, including workers’ compensation and unemployment insurance, were first introduced in Germany during the late 19th century by the conservative German chancellor, Otto von Bismarck. Although these programs drew directly from the concept of mutual aid as developed by thinkers like French anarchist Pierre Joseph Proudhon, many European governments adopted them as a way to make workers feel that they had a stake in the State and the capitalist system.

But the far more conservative American business and economic elite opposed social insurance right up to its implementation in the Social Security Act of 1935 and have been fighting for close to 40 years now to tear it down.

Many conservatives like to portray themselves as antigovernment or small-government libertarians. They’re not, of course. Many of the same people never saw a Pentagon budget, a law enforcement establishment, or a surveillance apparatus that was too big for them.

What they don’t like is any institution or program that provides benefits on a collective basis and with cooperative funding and thus promotes social and intergenerational solidarity. Programs like these minimize people’s dependence on the market and suggest the possibility of economic solutions outside the capitalist system.

That’s why, with the election of Trump and for the first time since the Bush administration’s disastrous attempt to sell Social Security privatization to a skeptical nation more than a decade ago, Republicans see an opportunity to dismantle these programs.

Trump’s assurances on the campaign trail that he didn’t want to go after Social Security are not to be taken seriously. His past utterances make clear that if Congress found a politically safe way to do so, he’d gladly go along.

And even if congressional conservatives fail to convince the president to go along with their schemes, these programs—and the people who support and depend on them—are reaching a major historical crossroads, one that may be more visible to those of us who think outside the boundaries of the State.

Liberal opposition has so far succeeded in keeping Social Security and Medicare from being destroyed. But the last time Congress passed a major expansion or improvement in Social Security was more than 40 years ago.

Meanwhile, the other pillars of old-age income security in the US, employer-based pensions and private savings, have steadily eroded. A retirement crisis is threatening that leaves the elderly without resources and instead forces their families and communities to figure out how to support them. Efforts by progressives like Sen. Bernie Sanders to expand Social Security to fill the gap have gone nowhere.

While options under the existing political structure are shrinking, the need for retirement security is growing. By 2050, 83.7 million people will be age 65 and older, almost double the 43.1 million in 2012, according to the US Census Bureau, and much the same is expected in many other countries.

Even if we prefer not to, we need to think outside the current, government-orchestrated social insurance system to develop solutions to the retirement crisis.

Ideas are out there. As far back as the 1970s, the visionary Gray Panthers movement promoted intergenerational housing in which young and old shared skills, expertise, and wisdom to build new communities. The Panthers created self-run clinics that addressed the needs of the elderly at a time when geriatric care was rare, which it still is in many places.

The Meidner Plan, a next-step evolution of social insurance attempted in Sweden at about the same time, proposed gradually transferring ownership of much of private business to a network of locally-based pension funds that could then use the capital to pay benefits and invest in sustainable, locally-based economies, each reinforcing the other.

Today, the LGBT community in San Francisco is coming together to create retirement resources for aging members. In New York and elsewhere, social workers are identifying “naturally occurring retirement communities” (NORCs): neighborhoods and apartment buildings with high concentrations of elderly who can pool resources and otherwise assist each other and leverage the services they need. Meanwhile, home-care workers, one of the most overworked and underpaid elements of the workforce, are organizing and demanding better pay and benefits.

Cooperative solutions like these aren’t the same as anarchism, but with their focus on decentralization, cooperation, and affinity, they point in similar directions. And, they are going to become more necessary even if the latest right-wing efforts to undermine Social Security and Medicare fail.

Another way to look at it is that an aging population gives us the opportunity to rethink the way generations interact and to visualize a society that doesn’t rely on markets and monolithic government programs.

The State, slowly but surely, is getting out of the business of social insurance. That leaves the field open to anarchist solutions.

Eric Laursen is a writer and activist living in Massachusetts. His most recent book is The People’s Pension: The Struggle to Defend Social Security Since Reagan (AK Press, 2012).