Anniversary of Judicial Murder of Anarchists 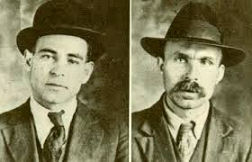 The Martyrs’ Farewell
That we lost and have to die, does not diminish our appreciation and gratitude for your great solidarity with us and our families. Friends and Comrades, now that the tragedy of this trial is at an end, be all as of one heart. Only two of us will die. Our ideal, you our comrades, will live by millions. We have won. We are not vanquished. Just treasure our suffering, our sorrow, our mistakes, our defeats, our passion for future battles and for the great emancipation.
Be all as of one heart in this blackest hour of our tragedy. And we have heart. Salute for us all the Friends and Comrades on the earth.
We embrace you all and bid you our extreme good-bye with our hearts filled with love and affection.
Now and ever, long life to you all, long life to liberty.
Yours for life and death.
--Nicola Sacco, Bartolomeo Vanzetti (Death House, August 21, 1927)

Anniversary of Judicial Murder of Anarchists

2017 marks 90 years since the judicial murders of Nicola Sacco and Bartolomeo Vanzetti, who were tried and convicted for the crime of being anarchists and immigrants.

In 1920, the two were arrested in a Boston suburb and charged with a payroll robbery during which a paymaster and his guard were shot dead. It was a time of intense state and corporate propaganda aimed at demonizing radicals and, similar to today, targeting immigrants as responsible for U.S. societal problems.

In 1921, in a trial marked by profound prejudice and manipulations, Sacco and Vanzetti were found guilty and sentenced to death.

The frame-up, sham trial and sentence of capital punishment outraged people of many political orientations in the U.S. and around the world. As appeals failed one by one, the popular protest grew, but the state was not to be stopped in its vendetta against the anarchist immigrants.

Immediately following their official murder on August 23, 1927, there were massive outpourings of anger and grief in many cities.

Half a million people wearing black armbands rallied in New York’s Union Square and very large protests were held in other U.S. cities and throughout the world.

In Paris, the U.S. embassy had to be surrounded by tanks to fend off an angry crowd of protesters. In London, a riot resulted in 40 injuries. The U.S. Consulate in Geneva was surrounded by a crowd of five thousand.

In Boston, a two-hour funeral procession was held to honor Sacco and Vanzetti. More than 200,000 lined the streets and thousands participated in the procession.

Sacco and Vanzetti were dedicated to a society without the state or capitalism, a classless society without the brutality of class domination. Remembering them is part of keeping that struggle alive. Autonomies.org offers a summary of the persecution of Sacco and Vanzetti and its place in history at autonomies.org/ar/2017/08/for-sacco-and-vanzetti/.

The Winter 2017 Fifth Estate (#397) contained a fiction piece by MK Punky, “Bank Guard,” which speculated what would happen if the protector of stored wealth just went home. It’s now part of a collection, How the Revolution Started: Essays and Impertinent Thoughts, by Michael Konik, his 11th book.

The short stories and essays by the author, who is also a jazz singer and improvisational comedian, examine what would be the result if everyone refused to carry out their assigned tasks that reproduce daily life.

The Wilhelm Reich Documentary Film Project—in production since 2015—needs a final crowdfunded push to complete its post-production phase and prepare for distribution. Reich’s 1933, The Mass Psychology of Fascism, and his other titles continue to provide an important understanding of the mass submission to authority of any ideology.

Reich’s books were so threatening to the medical and political establishments that they were banned and burned by the Nazis in the 1930s, and the U.S. government in 1956. Reich died in a Federal penitentiary in 1957 following his refusal to stop circulating his works.

An updated trailer and how to contribute is at indiegogo.com/projects/wilhelm-reich-documentary-final-post-production-film-history#/

There is a new website celebrating the 200th birthday of Henry David Thoreau, The Thoreau Polymonophonic Journal Project, thoreaupolymonophonicjournalproject.org.

It allows visitors “to participate by recording their thoughtful readings from Thoreau’s Journal (October 1837-November 1861) and sharing them online with other readers and listeners.”

The project is made possible with the support of the Appalachian Springs Foundation, which also supports Mon Oncle D’Amerique Productions and the choreography of Clara Gibson Maxwell.

Maxwell’s “Encuentro-Encuentro”—the video of her 2011 “site-responsive” and “multi-arts” ambulatory performance in an early 16th century Mexico City building was shown on September 14 in Montreal.

Clara will present a new performance, integrating the words of Henry David Thoreau, during the November 23–24 Encuentro at The House of the First Printing Press in the Americas in Mexico City.

The Turkish government has cracked down on the anarchist Meydan magazine since the 2013 Taksim Square occupation. Repression has significantly worsened since the state of emergency decree after the 2016 purported coup.

Last year, a Meydan editor was imprisoned and this September three people distributing the magazine were also jailed.

The authoritarian Erdogan government objects to Meydan’s support of the struggle in Rojava and the 2017 celebration of May Day, both of which it deems subversive.

These comrades need our support.