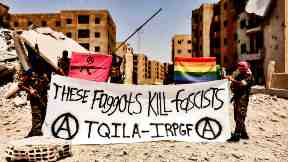 With “These faggots kill fascists” emblazoned on their banner, an army of international volunteers formed the first LGBT fighting unit to “smash the ISIS caliphate. This July photo shows them raising the rainbow flag in Raqqa, Syria. According to an online statement, The Queer Insurrection and Liberation Army, or TQILA, exists to “smash the gender binary...and advance the sexual revolution.”

The John Brown Gun Clubs, named after the famous armed abolitionist, consisting of anarchists and antifa, are being organized across the country to the consternation of righties, who thought they had a lock on armaments and authorities who fear a shoot-out among contesting groups could occur. The Phoenix Brown unit first came to public attention in March, pictured here, when they counter-protested a pro-Trump event. The clubs can be reached through redneckrevolt.org.