Errekaleor Bizirik is a large squat occupied by over 150 adults and children in Vitoria-Gasteiz, the capital city of the Basque Autonomous Community in northern Spain. 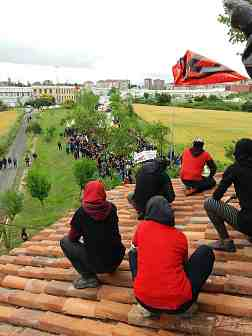 Defenders of the Basque Squat are prepared for police assault.

The name, Errekaleor, a contraction of a basque word that means dry river, refers to the plateau on which the neighborhood is situated. Like other large squats in Spain, such as Can Vies (see Fifth Estate, Summer 2017), Errekaleor is resisting police and government efforts to evict the residents.

The Errekaleor squat is located on 25 acres of land. There are 32 residential buildings with six apartments each, which were previously inhabited by poor workers who were forced to relocate during the dictator Franco’s industrialization program.

There are also a number of non-residential buildings that were part of the original development, including a school, stores, and two church buildings. Over the decades, the neighborhood caught the eye of local developers and city officials. After kicking out almost all of the residents in the early 2000s in order to build yet another disgusting, isolating, and corporate housing development, the 2009 economic crisis hit the city and put all their plans on hold.

Responding to the obvious attempt to boost real estate speculation in a city with 15,000 empty homes, and the impossibility of paying rent in an increasingly expensive market, in 2013 a dozen students occupied one of the buildings in Errekaleor.

Once the neighborhood was stripped of inhabitants by the city, but the students turned mountains of rubble into an organic farm, a bakery, a bar, a library, a theater, a free store, a recording studio, a print shop, and livable housing for over 150 students, workers, and families.

In May, power company workers and vans of riot police entered the neighborhood to cut the main electrical line to the project. Residents resisted as best they could. The city council later confirmed that the action was illegal, but the next day the mayor publicly stated his intention to evict the neighborhood during summer.

In response, squat participants built barricades and held parties, printed insulting pamphlets about our enemies and reasoned explanations of our position, and planted seeds in the Errekaleor farm and the media alike. We spent nights guarding the entrance to the neighborhood and days building a network of resistance and support.

Cultural memory of eviction resistance seems nothing like the daily experience of living in the middle of it. Stories and myths of resistance almost always focus on marches and riots, the wittiest signs and best-aimed rocks.

From an outside perspective, these moments of rebellion are the most visible and exciting, and can almost be taken as a force of nature that was simply waiting to explode. Looking at articles and media about the 1999 Battle for Seattle, the Trump inauguration protests, and the G20 rebellion in Hamburg this July, the narrative is almost entirely informed by the most exciting moments.

Photos of Hamburg show spirited resistance, but do not show the many local squats that acted as the organizational infrastructure of much of the protests.

The exciting moments when police are beaten back and spaces are liberated are critical to any resistance, and we like photos of burning limos as much as anyone, but given our position in Errekaleor Bizirik, we would like to emphasize a slightly different set of activities. We don’t want to forget that the destruction and police retreats are not inevitable, and that they are the results of long processes that are much less photogenic and memorable.

The weeks following the electricity shut off were brutal. We worked 12 to 16 hour days, running from project to project; building solar showers one moment and giving a press interview the next.

Dozens of people spent uncountable hours contacting every collective in the region in order to build a network of support that can create the types of protests we are all hoping to see. We have had assemblies lasting five, six, and seven hours that sometimes went nowhere, and sometimes formulated our fundamental strategies of resistance.

We have become a hub for food recycling, going out every morning to collect unsalable food from small groceries, and cooking together for 150 people twice a day. We have done this all while caring for children, going to our unfortunately necessary jobs, and trying to find moments to calm our nerves.

There were two moments of public resistance that will undoubtedly become part of our historical legacy. When the pigs came to shut off our electricity in May, around one thousand friends showed up to help us resist their attack, skipping out on their jobs to stand in the rain for hours.

There was a human wall, residents chained to metal barricades, and inspiring slogans shouted from the crowd. However, there were also broken bones, bleeding faces, friends stuffed into police cars, and the sickening feeling of watching brutal authoritarians take over your home and destroy things that have cost your sweat and blood.

On June 3, we had a march that slowly wound throughout the city, with 13 different collectives arriving as columns of solidarity. We brought together over 10,000 people, with tractors parading the streets with local militant rappers and took over the city for hours. We greeted our friends as they entered the neighborhood with firecrackers and flags on the rooftops, with a surprise concert and theater performance. We had thousands of people spend the night with us to share in our struggle, our excitement, and our fear.

When your very home, life and community are under at tack, all these moments are like high-voltage electricity running through your body. At no point before, during, or after a successful eviction resistance can you feel safe. You never feel like you have really won; you are always on edge, waiting for the other police boot to fall.

One night that boot fell. A police car tried to enter the neighborhood at two in the morning, and as usual we told them they could not. These particular pigs apparently had grown tired of getting stopped and faced down each night, and got out of the car with their hands on their batons. A siren call woke the neighborhood, and in minutes there were over a hundred of us standing in the street, some with clubs and masks, others with children and pajamas.

The entire city police force showed up, over a dozen cars blocking our entrance with their sirens and lights blaring. Unsure of what to do, they sat there for hours hoping we would just go home. After two and a half hours they relented, turning around one by one and returning to the city. In the following days, an internal memo from the police chief was leaked banning the police from entering the neighborhood at night for their own safety.

Although we were giddy with pride to read the police chief’s words, we cannot forget that this would never have happened without everything that came before it.

We did not turn away the police simply by our efforts that night. We were only able to do it because of hundreds of hours of standing guard, weeks of mental preparation for physical confrontation, and a planned response to this type of situation.

We love videos of police running from protesters and windows getting smashed. But these things take work, work that is outside of the frame of a video camera. It is easy to be carried away in a type of riot fetishism that forgets the massive preparation and organization that was necessarily taking place in the background, and moreover, ignores the hospitalizations, the stress, the lack of sleep, and in the end, forgets why the battle is being fought in the first place.

Glossing over or leaving out the pain and experiences of failure involved in such struggles weakens us. Acknowledging and sharing those realities can make us stronger and better able to withstand whatever may come our way.

More about Errekaleor Bizirik resisting eviction and building our independent solar energy grid are at:

To help any of the many squats that are facing a similar situation, please take a look at the following resources: en.squat.net/tag/eviction-threat and theoccupiedtimes.org/?p =14589