Hong Kong’s Black Book Fair took place November 17–19, 2017 in the lecture theatre of the Visual Arts Centre, close to the Admiralty area where the Umbrella Movement was ignited by a police attack on demonstrators three years earlier. 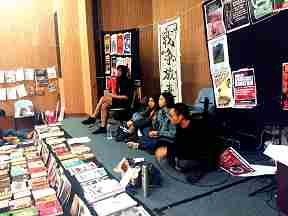 Collective members from a vegan restaurant in a working class community with a “pay what you feel is ight” free/autonomoous pricing operation presenting at the Hong Kong book fair.

Although the former British colony is supposedly autonomous from mainland China, Beijing government repression often looms. So, fair organizers decided to call the fair “Black Book” rather than “Anarchist.”

With a daily attendance of about one hundred, the gathering was small by comparison with many other such anarchist events elsewhere. But there was no shortage of enthusiasm, or imagination or international participation.

Lenny Catalysta, one of the organizers, notes that people came from quite a number of places—London, Tokyo, Taiwan and Mexico. Parcels and bundles of books, papers and videos arrived from Switzerland, France, Britain, Canada and Taiwan over the preceding weeks.

Planning for the fair was loose; just discussion of ideas and possibilities, and the shared attitude of anything goes. There were never any decisions or resolutions, only the agreement to perform specific tasks, no finalized programs of any sort. The book fair group didn’t know who would come or what problems to expect from the authorities. They were just let the event develop its fullest possibilities.

The original idea was to have a gathering of people with a vaguely anarchist theme, where everyone would be like a hawker in a village gathering. Each person would come with their basket of ideas, experiences, creations, collectively to exchange and share as part of a common harvest.

Organizers’ hopes for creating a focal point for sharing and solidarity were more than fulfilled. The three-day event “did turn out wonderfully awesome and amazing,” says Lenny; “together we made these many small worlds into one whole piece.” 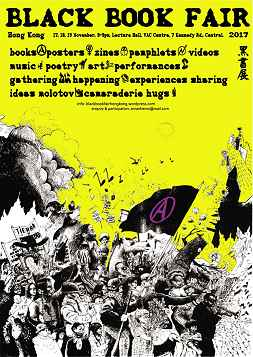 Poster for 2017 Hong Kong Black Book Fair, whose slogan was “When dreams fly they become realities”

The range and variety of issues and sharing sessions at the fair were very broad. Lenny notes that out of the 15 sessions, only four came through invitations made by the planning group. The rest were initiated by people responding to the call for participation.

Some examples of the sharing sessions:

“The anarchy of music and spirituality: John Cage or Jack Rage”

“Voices: Decade of cultural experience” (members of a publishing-house-bar in Taiwan)

“Mexican movement and its art”

Poetry readings, including Norman Nawrocki’s poetry videocast, “Why am I an anarchist?”

“The Mountains are high and the emperor is far away,” a documentary about the Jura watch makers, Africans in Hong Kong and Chinese anarchists.

The discussions were stimulating. There were rich exchanges of perspectives on the independence of Taiwan and the autonomy of Hong Kong on the first day. The Taiwanese Vagabond Social Arts Troupe shared local experiences in cities on the island formerly known as Formosa. This kind of discussion doesn’t usually happen in Hong Kong because cultural forum speakers on similar topics have been banned from entry to the territory. The fair was obviously off the radar of Chinese counter intelligence.

Another positive aspect of the fair, according to Lenny, was the inter-generational cooperation, from those who became interested in anarchist ideas in the 1980s to people just learning about them now. Students of all kinds examined books and pamphlets, looked at and talked about the posters and displays, participated in discussions, listened to the poems and music, and shared the event together.

The Black Book Fair differed notably from other fairs in another way. In order to avoid possible trouble with authorities, from early on the planners declared that the event would be an exhibition space, not a site for sales. They advised participants expecting to sell items, to offer them outside.

Books on display were purchased after the event was over. All pamphlets and zines were given away free.

The fair’s organizers considered potential problems. They worried about what to do if Taiwanese participants were barred from entry to Hong Kong, if the fair venue was refused usage at the Last minute, and how to handle the possible appearance of paid thugs in the guise of counter-demonstrators, all of which had happened at past events. They also knew that bookshop owners in Hong Kong who carried material critical of the Chinese government have been abducted across the border into mainland China.

Lenny says, “We spoke of ‘what-ifs.—Despite the real possibilities of such problems, things went smoothly, without major disruptions.

Anarchists in Hong Kong are moving ahead with plans for a second anarchist book fair in November 2018. A monthly anarchist film showing will serve as a meeting place where ideas for the event can be worked on. A book describing the sharing sessions of this year’s event will be published in time for the 2018 fair, along with a video documentary made this year.

The book fair organizers give special appreciation to Marianne Enckell of the CIRA anarchist archive in Switzerland, J.]. Gandini in France, and Ahkok in London, for providing exhibition materials for the event and helping with announcements and invitations.

For more on Hong Kong anarchism, see our 2009 article, “Hong Kong: Where Anarchists & Blackbirds Sing About Freedom” by Norman Nawrocki. Put Hong Kong in our Subject search box at FifthEstate.org.