Thoughts on the Significance of France, May 1968 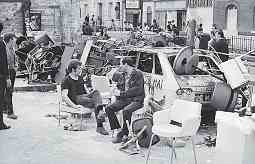 Paris, May 1968: Taking to the streets is more than building barricades and fighting the police. Perhaps more importantly, it’s also a time for many hours of discussing ideas and passions that escape the mundane.

The sounds of laughter as well as anger filled the days and rebellion—and perhaps revolution—moved from the tiresome meeting room and out into the public gaze. Words and deeds were synchronized.

There was a palpable sense of possibility in the air and people realized they were not alone. They saw that others felt the same as they did and the old isolations were submerged into this huge channel of fun and opposition. Authority was challenged in the Rue de l’Estrapade, the Rue de Thoin and then throughout Paris, into much of France and the world beyond.

It is encouraging to realize that what started as a small protest against the arrest of students at the University of Nanterre for protesting the Vietnam war escalated so quickly. In retrospect it seems that surprised everyone. Mass rebellions can be caused by the smallest of incidents and resistance is always possible.

May ’68 brought back into focus the role of the student in creating revolutionary change and for some years afterwards many leftist groups yearned for what they saw in Paris; a student-worker front that would provide the spearhead to overthrow capitalism. If it is now known that this alliance wasn’t quite as rich as it appeared to be in the May days, the strategy still has potency.

This focus on students placed the emphasis on youth as the engine that drives social change. It’s a seductive idea, but fraught with challenges. Any strategy for revolutionary change predicated around one age group doesn’t, at first glance, appear to be the soundest of strategies. It’s great to see young militants, students or not, at the forefront of social movements, but anarchism is for grandparents as much as anyone else. This idea appears to have got lost somewhere along the line and it should be something we could all work on.

May ’68 also re-established the idea of the streets as the battleground of revolution. Being out on the streets was the public expression of willingness to fight for what we believe in and a way of attracting others to anarchist ideas.

Perhaps all the glamour and excitement was a little seductive. No doubt some saw the overturned cars and the barricades on the TV news and rushed to join in the action. But the primary area of struggle ultimately may have been elsewhere and overlooked as we were swayed by the bravery and militancy of those days.

To their credit anarchists and students did try to talk and collaborate with working class people whose response to them was, at times, not as positive as desired. If many workers held back, at least some dialogue took place and in some cases working men and women found a new voice and experienced situations that brought out the rich potential that was in them.

This ability to relate to people with different ideas does not appear to be a strength that some have today. It may be more fun (and safer) to be with people who think the same as us, but if the aim is still deep revolutionary change we will have to engage as some did in ’68, with people who may initially think anarchist ideas are stupid or weird.

As the May days progressed, it became clear that many were in the streets and taking part in events because they sensed the meaninglessness of life under capitalism. We may well have the same feelings in 2018.

Thoroughgoing revolutionary change can only come about, though, when many more people understand anarchist ideals and passions and our task is to find the language that explains them in ways that people can understand. Taking to the streets might, eventually, be the end of a process rather than a beginning.

A concept ingrained in anarchism has always been internationalism—solidarity with struggles for freedom and liberation that surface throughout the world.

One slogan on a Parisian wall prompted, “It’s all our business” and it was!! May ’68 stressed that the anti-colonial struggles going on in the world at the time were not just someone else’s concern, but ours as well.

In essence, another front of support opened up in the colonialist countries—a support that was loud, vigorous and effective and long may it continue. Certainly May ’68 was a healthy reminder to anarchists in other countries that internationalism should be running through their veins a little more vigorously than it may have been.

Anarchists found themselves in the company of many left political groupings during the May days of ’68. Without doubt there was a tension between us and them—one anarchist leaflet from the Sorbonne University accused Communist Party members of the CGT trade union federation of handing over visiting students to the police.

The question remains for today’s anarchists as to who should be worked with to achieve anarchy. Of course, it is always necessary to support those who fight back against the brutalities of capitalism. How could we be anarchists if we didn’t?

That said, Paris ’68 should be a reminder that left wing parties and programs have nothing in common with anarchist goals or practice—indeed, are as much our enemies as anyone. So many comrades have been murdered by people who considered themselves Marxist that it would be tragic if we still felt that we had much common ground between us.

When remembering May ’68 we should also remember all those murdered by Marxists in Russia, Spain, Bulgaria and elsewhere and consider the relevance of those deaths to who should be chosen as allies now.

If achieving thoroughgoing revolutionary change is taken as a measurable criterion of success then the events of May ’68 were a failure. Within weeks, Paris resumed some sense of normality, although conflict continued in a myriad of places afterwards. Nevertheless, there remained a fleeting glimpse of what could have been. May ’68 was not the first time this has happened—anarchists can refer to hundreds of similar transient events both large and small where people challenged the economic and mental cruelty of capitalism and its attendant power structures. In doing so, they celebrated an exhilarating autonomy, and discovered the richness and potential within themselves that had been previously smothered.

The challenge now, more than ever, is to assess what we must do to add the permanence that has been missing for so long.

Perhaps the strikes and occupations taking place in France now—actions as rich and vital as May ’68—will provide some of that permanence.

If I may add a personal note: In Memoriam; those students murdered in the Tlatelolco Massacre of October 2, 1968, by the Mexican state. You are not forgotten: Our Day Will Come.

Barry Pateman is a member of the Kate Sharpley Library collective—preserving and promoting anarchist history. katesharpleylibrary.net