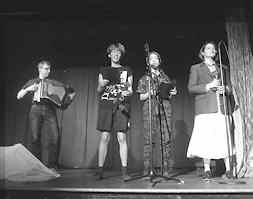 Norman Nawrocki’s “No way! No way! Trees that Talk” was presented at the 2018 Montreal International Anarchist Theatre Festival, the theme of which was Anti-Fascism. The play is based on the lives of six anarchist, anti-fascist women—four from 20th century opposition in Italy, Spain, Germany and Poland, and two recent ones from Greece and Syria.

A photo of each character was projected on stage with period theme music playing as the women delivered their monologues. This excerpt features Georgia, a Greek anti-fascist who was played by actor Caileigh Crow.

At the conclusion, the actors, accompanied by an accordionist, sang the Italian anti-fascist song, Bella Ciao, with the audience.

Kaleespera! (Good evening) Kalos IRTHATE! Welcome! Welcome to the genuine anti-fascist fighting club! This is where I train with other anarchists-men and women. My name is Georgia. I’m Greek. Been an anarchist for a long time. Twenty years at least.

When the neo-fascist party, Golden Dawn, first entered parliament, there were raging street battles between us antifascists and them. In my neighborhood in Athens, there were racist attacks and attacks against anarchists.

And, anti-migrant raids across the country. Against undocumented migrants and refugees from Afghanistan, Pakistan, Somalia. They used clubs, crowbars and attack dogs. They killed people. So, we anarchists and anti-fascists started training in self-defense. To protect ourselves and others.

I fight for the equality of all people. Everyone. This is why I’m an anti-fascist. Anti-fascism means we fight against any kind of oppression. Racial, sexual, homophobia, even capitalism. Because global capitalism is a kind of fascism, too. The rich oppress the poor. Everywhere. Gamoto elk! (Fuck that!)

In this gym, there is no tolerance for sexist or patriarchal behavior. Macho guys? Not welcome! (POW! PUNCHES IMAGINARY OPPONENT)

In Greece, we have a deep-rooted culture of anti-fascism. (pauses to catch her breath, hands on knees)

During WW II, German Nazis and Italian and Bulgarian fascists occupied us. Before we expelled them, they killed 60,000 Greek Jews.

But Fascism didn’t die with Mussolini or at the end of the war. No! Europe didn’t learn from its mistakes. There are those who live to spread hate speech every day. Even here! Between 1967 and 1974, brutal right wing military juntas ruled Greece. So many activists, trade unionists, anti-fascists were arrested, tortured, and murdered. But always, anti-fascist resistance.

(high kicks moving across the stage)

You know, I’m not in favor of violence. I’m an anarchist. I prefer talking things out with people. Violence against fascists is usually self-defense. And, I don’t want the world to deal with fascism using violence. I want to change the future and overthrow fascist ideology using peaceful means.

But meanwhile, once again, there are fascists patrolling the streets-our streets! We can’t let them march around freely. We have to make the streets unsafe for them.

So we train. To defend ourselves and others. This is how we do it in Greece!