Anything Can Happen—Or Not
May 1968 & the Question of Possibility

It was the year of the Prague Spring, the Tet Offensive, President LBJ’s abdication, massive student protests, the assassinations of Martin Luther King, Jr. and Robert Kennedy, the police riots at the Chicago Democratic Convention. The most historically momentous occurrence of that year was the May June uprising and general strike by students and workers in France.

Something was definitely happening! 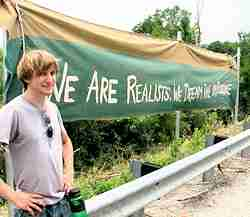 Slogans of 50 years ago echo today in movements of resistance and revolution. “We are the realists: We demand the impossible.”

The #1 song of 1968 was “The Happening,” by Diana Ross and the Supremes. “I woke up. Suddenly I just woke up to the happening.” People all over the world had that feeling. What many overlooked was that, as the rock group Buffalo Springfield pointed out, when “there’s something happening here,” sometimes “what it is ain’t exactly clear.”

Fredy Perlman participated in the Paris events and chronicled them in his essay “Anything Can Happen,” which captures the euphoria and hopes of those caught up in the events of the Summer of ’68. At the time, I was studying in Scotland, but also visited Amsterdam, Berlin, London, and other centers of political activity. It felt like something was happening.

On a street-corner in Edinburgh, I met a classic hippy in a long robe who supported himself by selling Anarchy magazine. I picked up two issues reporting on the events in Paris. I was inspired. Some of my dreams seemed to be becoming realities. When I finally got to Paris, the revolt had already dissipated. However, it lived on in the imagination, including my own.

Anything can happen! The ancient sage Heraclitus, a major thinker from Asia Minor, said “always expect the unexpected,” because if you don’t, you won’t recognize it when it appears. He also said that there is a logos, an underlying meaning and order. It is the nature of things, not something we can impose. So, not just anything can happen!

Similarly, the Surrealists developed the idea of “objective chance.” Andre Breton, a leading figure of the movement, describes it as something “that shows people, in a way that is still very mysterious, a necessity that escapes them.” Anything can happen! But then we find out that certain things were destined to happen.

Ancient Daoism saw the art of living as based on wu wei, which means doing without doing. It means allowing things to happen spontaneously, then nurturing them in a non-possessive, non-controlling manner. But again, not just anything happens. All things have a dao, a way of their own. By not dominating them, we help them follow their way.

What was the way of May ’68? Perlman writes that despite being “trained for a lifetime to respect law and order,” students and workers staged “a general strike which paralyzed all French industry for over a month.” Anything can happen!

But as he knew, there was much more to the story than indoctrination and liberation. There was a long history of worker organizing, rebellion, and insubordination. The famous French “esprit critique,” critical mind, was dispersed widely, and there’s a real social history that did the dispersing.

Perlman says that in May ’68 “divisions among the oppressed disappeared” and “they began to fight against a single world system that oppresses and divides.” Yet, much of this revolutionary solidarity seemed to have disappeared by August, when people put down the paving stones and headed for the actual beach.

Why didn’t the revolt continue to radicalize? Most of the voting population supported the right in late June elections. And the revolutionaries’ demands of May were soon exchanged for reformist ones.

Yet, there was a real change in many participants. Some were transformed deeply for the rest of their lives, though often who they became was not who they thought they were becoming. A moment of deep transformation was taking place, but its direction was being guided by social forces that were not consciously recognized.

The Situationists warned of the system’s forces of recuperation or cooptation, but few suspected how powerful those forces were. While liberatory paths were emerging, the pervasive effects of institutional, ideological, imaginary, and ethotic (practical) determinants remained. New possibilities appeared, but contradictory possibilities persisted, and soon gained ascendancy.

Why did so many revolutionaries fulfill French psychoanalyst Jacques Marie Émile Lacan’s prophecy that they were looking for “new masters?” Marxist-Leninist sectarianism, with its easy-to-plug-into ideology, historical mythology, and cult of personality was a convenient option for those who found running away from the old world to be too strenuous. Many succumbed to the lure of a Third World-ism that had little to do with the living realities of non-Western societies, and nothing at all to do with the indigenous realities that they needed desperately to discover.

But the most masterful of the new masters was a transformed version of an old one: the commodity. We saw the increasing mediatization and spectacularization of the movement, the emergence of political stars, and the conversion of political activism into social capital. Soon, the Kinks would immortalize in a song the idea that “everybody’s a star,” but the movement was already way ahead of the game.

Possibly the worst leftist cliché was “the whole world is watching.” Maybe it was. But so what, if “the revolution will not be televised”? The world may be watching, but some of it is cursing at you, some of it is laughing at you, and some of it is bored and about to change the channel. Worst of all, some of it is thinking, “Wish I were there. I could be a star.” My friends all drive revolutionary Porsches. I must make amends, adding a word to the Janis Joplin song.

We discovered something “under the paving stones” of May ’68 and it wasn’t “the beach.” It was what was paving the way for the cooptation of revolution by capitalism. “It is forbidden to forbid!” so, “Just do it!” Consume your own liberation.

Then, along came hip capitalism, New Age capitalism, green capitalism, and right-wing “libertarianism,” the most advanced and mystified ideology of capitalist domination.

The revolutionaries wanted liberation and capitalism was about to give them more liberation than they knew what to do with. Be as free as you want, as long as you don’t threaten the structures of domination!

Never had so many impossibilities been turned into possibilities in so impossibly short a time. This culminates in the cyber-revolution of the past twenty years. We’ve entered the age of instant and totally addictive non-gratification. Everything is possible, yet nothing really happens in our age of ascendant nihilism.

One of the messages of indigenous cultures is that not everything is possible. Native American writer John Mohawk attacked utopianism on the grounds that conquest has always been justified by utopian ideology. First, it promised

Heaven, then the Heaven on Earth of the consumer society. The utopia of domination has always refused to recognize limits, and especially natural, ecological ones. In the name of infinite possibility, it is now, in the Necrocene, making everything impossible.

It’s time to renew May ’68’s quest for “the impossible,” but this time an impossible grounded deeply in the realities of history and of the Earth. This requires an imaginary break, an ethotic (practical) break, an ideological break, and an institutional break with the dominant ecocidal and genocidal order. Otherwise, the movement will once again succumb to collapse or cooptation.

This break must take place through processes of social regeneration, rooted in communities of liberation and solidarity, awakening and care, and of larger communities of such communities. This was the vision of German anarchist theorist Gustav Landauer and other communitarian anarchists, but it has never become the central focus of the anarchist movement. This is why indigenism remains so important. It teaches us that communitarian anarchism is a topian reality, the wisdom of the ages, not just some utopian ideal.

When I got back to New Orleans at the end of the Summer of ’68, I began selling (usually giving away) forty copies of Anarchy every month, and started an anarchist group, hoping that something would happen. I was a believer, or at least a half-believer, in “anything can happen.”

Looking back on the period, I find that I wasn’t concerned enough about how things happen, the nature of cause and effect and how they relate to conditions in the world. I gradually realized that this must be a major preoccupation, if you want something to happen. Understanding causes and conditions are crucial, even if it’s still essential to believe in magic. Any real magician can tell you this.

The conclusion is that if you demand an impossible that is radically different from the actualities that you have known and lived, you may be in trouble when your demand is realized. It might be a good idea to begin by searching for actually-existing impossibilities. These may create the best path toward the best of all possible impossibilities.

John Clark is a communitarian anarchist activist and theorist in New Orleans. He is director of La Terre Institute for Community and Ecology and is the author of The Impossible Community: Realizing Communitarian Anarchism and Between Earth and Empire: From the Necrocene to the Beloved Community. The latter and a new edition of the former are forthcoming from PM Press. pmpress.org