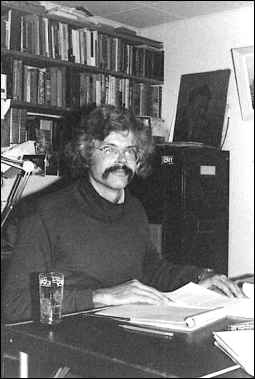 Growing up near Chicago, Porter graduated from Oberlin College near Cleveland in 1961. He then attended the Institute of Political Studies in Paris. His doctoral studies in politics at Columbia University included a year in Algeria learning directly about the workers’ self-management movement there.

Porter went on to teach at several colleges and universities in the U.S. and Canada. His last position was in SUNY-Empire State in Saratoga Springs, where he taught for 25 years.

Perhaps his best known books on anarchist topics are his 1983 anthology Vision on Fire: Emma Goldman on the Spanish Revolution and his 2011 study, Eyes to the South: French Anarchists and Algeria.

Vision on Fire enriches our understanding both of Emma Goldman’s libertarian life and ideas and the Spanish events she interpreted as a dedicated anarchist eyewitness. The book, which took eight years of research and writing to complete, has been reprinted and translated into several languages.

Eyes to the South has also been of value to many anarchists and other anti-authoritarians.

In her review for Fifth Estate #389 (Summer, 2013) Kathy E. Ferguson indicates, “The great strength of the book is that it lets French anarchists speak for themselves...A recurrent theme in Porter’s account is the relation of anarchism to anti-colonial nationalist struggles, to states, and to other progressive actors. Anarchists oppose the oppressive racist practices at the heart of colonialism, but how is that opposition best expressed? Should anarchists support struggles for national liberation because they strike blows against the empire, or oppose them because they usually end up creating new states?”

Ferguson noted that Porter concretely described the circumstances within which anarchists of various tendencies addressed these complex questions.

A longtime resident of New Paltz, New York, Porter was active in challenging threats to the local environment and economy posed by corporate development. Among other activities, in the 1990s he co-founded a grass-roots group that contributed to defeating plans for inflicting a Walmart and shopping mall on his hometown and region. He considered participation in the campaign one of his life’s achievements.

Coming out of the years-long struggle, Porter, along with Chester L. Mirsky, wrote Megamall on the Hudson: Walmart, Planning and Grassroots Resistance, published in 2003. It has much to say to community and environmental activists facing new struggles.

David’s contributions to the FE include in-depth articles about anarchists in the Spanish Revolution and its aftermath and discussions of the life of Emma Goldman, as well as articles about grassroots activities in Algeria, Egypt, and the Arab Spring.

Ten of his articles are currently online on our website (and more to come) for viewing and download in the growing archive, fifthestate.org. Type David Porter into a search box. Those interested in libertarian analyses of the Spanish Revolution, women’s issues, autonomist organizing, among other subjects, will find them of interest.

In a 2011 article relating to the Arab Spring, David describes the Egyptian situation with words that also describe his general outlook as a libertarian rebel:

“While the human face of the oppressive regime—as Mubarak in Egypt, Ben Ali in Tunisia and Bouteflika in Algiers—is despised with good reason on its own, such targets also symbolize a wide and deep range of grievances that extend from national-level organs of the state and military down to local-level daily humiliations of officials’ contempt, bosses’ exploitation, mistreatment of students and women’s exclusion from the workplace and political life. These are the larger realities of the existing ‘regime’ of oppression. And this much larger dimension of grassroots revolution poses a whole other question of leadership.’ When certain ‘spokespeople’ for the movement or independent ‘power brokers’ become fixed in place—encouraged by negotiators for the old regime or by the media or by their own self-promotion—it is doubtful that those deep levels of revolutionary aspirations will be heard. This will be a key dynamic to watch in Egypt in the weeks to come.”

(See “On ‘Leaderless Revolutions’ and the Fall of Mubarak,” available at theanarchistlibrary.org)

David Porter will be greatly missed. His engagement was energetic, creative and long, and he left an example to be appreciated by free thinking and acting rebels.