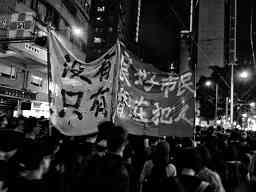 Our banner in the marches, which is usually found at the front of our drum squad. It reads “There are no ‘good citizens’, only potential criminals.” This banner was made in response to propaganda circulated by pro-Beijing establishmentarian political groups in Hong Kong, assuring “good citizens” everywhere that extradition measures do not threaten those with a sound conscience who are quietly minding their own business. Photo by WWS from Tak Cheong Lane Collective.
Source: Hong Kong: Anarchists in the Resistance to the Extradition Bill (CrimethInc, June 22, 2019)
https://crimethinc.com/2019/06/22/hong-kong-anarchists-in-the-resistance-to-the-extradition-bill-an-interview

The Fifth Estate supports the struggle of the anarchists and anti-authoritarians of Hong Kong for a world in which social solidarity and individual freedom can create community. We join them in opposing the brutal dictatorship of the Chinese government and its supporters in Hong Kong as much as we ppose the tyranny of the U.S. and other governments.

From an anarchist in Hong Kong:

Lenny’s Prayer (to the world)

Living on earth without borders

Traveling the land without a visa

Speaking without fear and

Lyrics sung in Chinese and English