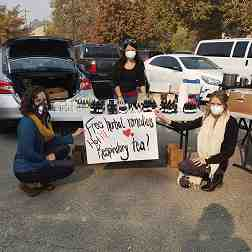 The Camp Fire was also a health and environmental disaster. Smoke from the deadly fire resulted in widespread air pollution throughout the San Francisco Bay Area and Central Valley.

On November 8, 2018, a deadly wildfire—called the Camp Fire because it began on Camp Creek Road—swept the western Sierra Nevada foothills in northern California. The fire’s spark originated with Pacific Gas & Electric power transmission lines that ignited dry vegetation on a particularly windy day.

Wildfires have become more prevalent and deadly in recent years due to human-fueled climate chaos. Drought conditions have created a tinderbox on much of North America’s West Coast.

One of the small cities torched by the Camp Fire was Paradise, 175 miles northeast of San Francisco. The city government had failed to act on an earlier mandate to improve and expand evacuation routes. As a consequence, people died, partly because they could not quickly escape on the clogged roads toward nearby Chico.

As in most disasters, people who are not trained as first responders were the first heroes along with the professionals. Mutual aid in the first hours and days of the fire was key; trash collectors rescued trapped elderly people, nurses rushed to evacuate patients from a hospital, and many risked their lives to help others escape on foot. The communities surrounding Paradise and other devastated areas opened their hearts, homes, closets, and arms to help people.

In Chico, parking lots and churches organically developed into drop-off centers for people wanting to “do something” and as shelters for evacuees, who established squatter camps composed of recreational vehicles, tents, and other makeshift structures.

One group formed in response to this crisis was North Valley Mutual Aid (NVMA). Shortly after the fire swept through Paradise, residents called a public meeting in Chico at Blackbird, a cafe/bookshop run by an anti-authoritarian collective, to discuss what the community response could and should be. Individuals who attended took inspiration from Mutual Aid Disaster Relief (MADR), which had given a workshop presentation in Chico on this very topic, ironically only a few weeks before the fire.

NVMA chose a decentralized approach, encouraging the formation of working groups to pursue various initiatives and projects in line with their values, which were borrowed directly from MADR. These include solidarity not charity, self-determination, leadership from below, horizontality, autonomous direct action, intersectionality, sustainability, dual power, and collective liberation. The community wasted little time launching into action. Chico-based anarchist publisher AK Press circulated a fundraising call that raised over $50,000 in a few short weeks.

Radicals throughout the region showed up in Chico, ready to get their hands dirty. Some of the early NVMA projects included support for various encampments, especially a large one that grew in Chico’s Walmart parking lot, psychological and emotional support via conversations with and listening to survivors, providing herbal medicine, and a childcare collective that minded children while stressed parents ran errands or had “date nights.”

Walmart’s private security and the city of Chico disapproved of NVMA’s support for those staying in the Walmart camp and sought to evict the evacuees soon after the fire. According to one organizer, the group helped evacuees raise tents out of the mud, created a heating tent with drinks and food, and respected resident’s choices:

“When people didn’t want to heed the eviction we offered support,” they said. “[W]hen it became apparent that everyone would be removed with or without their consent we helped with rides and shared the different options available. When other encampments were evicted (even longer term encampments of previously unhoused people) we offered emotional support and documented the actions of [Chico] law enforcement. When an emergency shelter opened for a couple of weeks, we were there every night cooking food for everyone.”

NVMA’s support at the Walmart camp compelled the company to donate money for a shelter.

Authorities responded with paternalism and paranoia. The Butte County Sheriff’s office tweeted about an unrelated arrest with the hashtag #CampFire during the crisis, stoking irrational looting fears. Some NGO-run camps prevented “un-authorized” entry and searched those who did. The local university president articulated a not in my backyard opposition to locating a homeless shelter near the campus. The two biggest consequences of the Camp Fire were (1) the ruined communities and environment, and (2) the huge housing crisis it has exacerbated. Paradise is barely inhabited, as most houses burned down, the water has been poisoned, and former residents have entered a diaspora.

Nearby Chico, which grew by nearly 20 percent after the Fire, already had a severe housing crisis of home shortages, increasing rents, and a homeless population larger than shelter capacity. Due to the Fire, housing prices and rents have skyrocketed, and a reactionary attitude has taken hold among some to distinguish between the “deserving” homeless (from the Camp Fire) and the “undeserving” (those homeless pre-Fire).

The challenges anti-authoritarians in NVMA faced were related to the much harder problem of creating long-term shelter and housing, and burnout from the initial months of intensive care work. But, as of the Fire’s sixth month anniversary, the group has re-organized. It now also aims to redirect funds and people power toward other non-NVMA projects that reflect its values.

And, it is pushing forward on projects addressing the still-existing needs of evacuees and others affected by the housing shortage, as well as strategizing how to respond to the next disaster.

The immediate aftermath of a disaster provides a vision of how we all could be with each other: immediate, present, caring, indignant at injustice, and filled with solidarity. But, there are difficulties with keeping such passions long-term, with normalizing our extraordinary tendencies to regular times.

Particularly, the challenge is to maintain and proliferate a generosity of spirit, the collective strength to dream about radically-transformed futures, and the willingness to keep building the road toward justice and freedom.

Communities that can build their organizational capacities—independent of city governments, large NGOs, corporate philanthropy, and charismatic leaders—will be best suited to extend solidarity to whomever needs it and whenever, whether in times of disaster or not.

Thanks to NVMA participants who shared their thoughts for this article.

Dana Williams lives in Chico, California and is the author of Black Flags and Social Movements (Manchester University Press, 2017).