In the early hours of July 13, Will Van Spronsen was shot to death by police outside of an ICE-contracted private detention facility holding migrants in Tacoma, Wash. He was confronted by police in a parking lot full of buses; buses that were to be used to deport large numbers of migrants in a coordinated, nationwide action launched by the Trump administration. Will was trying to destroy as many buses as possible. 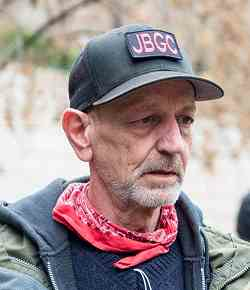 He was placing flares to ignite the buses including underneath a 500-gallon propane tank, and ignited his own car, causing an explosion.

Will Van Spronsen was 69 years old, a member of the John Brown Gun Club and a veteran of many of the more anarchist-leaning collective efforts and social movements of his day, of our times, including campaigning against ICE.

Van Spronsen sent a final statement to his friends and comrades, where he wrote in part, “there’s wrong and there’s right. It’s time to take action against the forces of evil.” Armed with an AR15, it seems he was expecting his death would be the end result of his actions that night. The Tacoma cops said Van Spronsen pointed his weapon at four officers and they responded by shooting him multiple times. His gun had not been fired.

To the small extent that his actions of that night got any corporate press coverage, it focused, predictably, on Van Spronsen’s mental health. Mental illness, their logic informs them, should be the only reasonable explanation for someone taking actions such as these.

Everyone has their own histories and lives, and there are few if any perfect specimens, but it’s obvious that whatever personal obstacles Will was facing in his life, there was a clear political rationale for his bus-burning efforts. He made this abundantly clear in his own eloquent words, in the statement he wrote before he went to the ICE parking lot.

In his statement, he wrote: “i have a broken down body. and i have an unshakable abhorrence of injustice. that is what brings me here. this is my clear opportunity to try to make a difference.”

In the face of what appeared to Will and many others to be the rise of an overtly fascist state complete with concentration camps, thinking and feeling people who share this analysis of how things are going are faced with certain choices. If prior efforts at organizing a reasonably egalitarian society have failed, and largely as a result of this failure, the white supremacist right is in the ascendancy and may soon make a bid for a completely dictatorial control of the state, people who have given up on more optimistic strategies can basically go in one of two directions. Hunker down with your friends and family and try to survive until times look a bit brighter, or resist.

Resistance, in a scenario where the fascists have taken over, such as, say, in Germany post-1933, is not the kind of resistance where a social movement has its eye on victory. This resistance is very different. It acknowledges that winning isn’t a realistic option, and embraces a different orientation, that of sabotage.

The burning of the buses at the ICE facility was an action in the tradition of workers in the munitions factories in occupied Holland during World War II who left out gunpowder in the bullets they were producing, which the German Army only discovered on the front lines in Russia during one battle that did not go as well as planned. Often times actions such as these are ultimately discovered, and those particular saboteurs paid with their lives.

This sort of action that involves the likelihood or certainty of your own death in carrying it out is a powerful meme, and not only among anarchists. I discovered this in a direct way after posting a song I wrote about Will Van Spronsen’s actions (“The Time To Act”) on YouTube.

The song got thousands more views than YouTube broadsides that mine usually get, with a significant minority of comments from fascists, who more or less openly identified as such, and who frequently wished that I and any other sympathizers with Van Spronsen’s actions should face the same fate as he did.

Measuring the impact of an action is often impossible, usually because there are too many other factors in a big situation like this to be able to isolate any of them and say what impact one action had over another, if any.

What does seem clear, though, is that if you try to burn a bunch of buses at an ICE facility, you will draw both high praise and extreme hostility.