Anarchist Cuba
A culture of resistance against capitalism & the state

“...these anarchist rebels took part in a long tradition of imagining Cuba as an ‘island of dreams’ where humanity could create a free, healthy, educated, and egalitarian beacon for global liberation.” 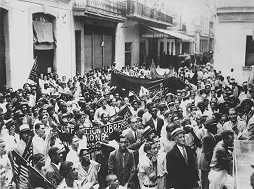 1933 Cuban General Strike. The bloody regime of dictator Gerardo Machado came to an
end when a general strike paralyzed the economy. A last minute deal he made with the
Cuban Communist Party failed to save the regime and Machado fled into exile.

Kirwin Shaffer’s new book helps readers understand what being an anarchist has meant in Cuba during the 19th, 20th and 21st centuries. Previous histories by other authors about anarchists on the island have concentrated on their participation in the urban and rural labor movement. However, in this book, Shaffer, a professor of Latin American studies at Pennsylvania State University, Berks College, explores several additional areas of involvement outside the workplace during the past 150 years.

He describes the development of various projects during this period, including writing and publishing of anarchist inspired fiction and nonfiction, producing radical theater, visual art, music, alternative health clinics, as well as schools for both children and adults free of state and religious control and specifically dedicated to encouraging independent thinking. Participants pooled their knowledge from a variety of backgrounds—women and men, old and young, black and white, Cuban and foreign-born, skilled and unskilled workers, poets, shopkeepers, playwrights, and librarians.

Shaffer does not shrink from discussing the ambiguities and contradictions within the various projects, or their internal squabbles and differing points of view on several important issues. His care not to idealize or exaggerate accomplishments enables readers to more easily understand the dynamics involved.

The various undertakings are described in the context of how they were intended to counter the authoritarian character and brutalities of the Catholic and Protestant churches, the military and the Spanish colonial administration that held sway until the end of the 19th century, and then the nominally independent Cuban state—all of which contributed to the highly exploitative and repressive conditions on the island.

Shaffer discusses how anarchist projects responded to, and helped shape the popular understanding of concepts such as freedom, equality, identity, and progress. Part of this involved fighting against racism, for women’s equality, and uniting the working-class across racial, national, and gender lines. By the 1890s, Shaffer tells us, anarchists in the Cuban labor movement were able to play a major role in fostering class ties among people of diverse origins and race, as well as in excluding party affiliation from union activities.

He also delineates the major differences between anarchist and Marxist groups, which were active in Cuba from the 19th century on, especially the strategies for dissent each chose. Marxists concentrated on building organizations to train and guide/supervise the proletariat at the work place, in daily life, and at the ballot box. The anarchists were strongly committed to means that coincided with desired future ends, such as encouraging the independence and self-activity of students and workers while fighting against unjust working and living conditions.

They recognized the struggle against domination as connected to the immediate construction of the means of resistance. Anarchists designed their projects specifically to improve the lives of women, men and children in the present as well as to prepare them for a social transformation sometime in the future.

Shaffer devotes three chapters to exploring the anarcho-naturist influence among Cuban anarchists. The naturist movement, which developed in Europe and North America during the late 19th and early 20th centuries, focused on alternative personal health and lifestyle practices, such as adopting a simple, inexpensive and nutritious vegetarian diet, getting lots of outdoor exercise, practicing nudism, living in small villages where everyone can know each other, and doing whatever possible to combat the effects of industrial mass society.

In Cuba, several anarchist writers and artists shifted the naturist movement’s focus away from primarily individual health concerns to an emphasis on social emancipatory themes by writing news stories, essays, novels, plays and advice columns that were widely available beyond anarchist circles. This cultural influence persisted into the 1950s even as the anarcho-syndicalist movement was significantly weakened by government repression and the consolidation of the Cuban Communist Party.

Although anarchists from all tendencies were interested in ways to improve health, anarcho-syndicalists (especially in the cafe and restaurant unions) and anarcho-naturists were particularly focused on aspects of daily life that disproportionately affected the young and the working poor. They emphasized learning and teaching alternative medicine to help people deal with health problems of modern society, including ill-health brought about by harsh factory and field work, as well as diseases caused by cramped and poorly ventilated living quarters.

Some went even further and offered deep criticisms of modern civilization—sometimes from an idealized perspective on pre-modern conditions and other times from a more sophisticated point of view involving a critique of the modern city as the direct consequence of industrial exploitation of the natural world, approaching the breaking point.

Other anarchists criticized what they viewed as the anarcho-naturists’ idealization of nature, and the concepts of what were supposedly nature’s laws as tending toward mystification.

Although they were internationalists, many anarchists played a significant part in inspiring and fighting for Cuban independence from Spanish colonialism in the 1890s. It was their hope that the struggle against injustice and imperialism would be the prelude to a domestic and later international social revolution.

Some anarchists warned it was a mistake to put hope in a nationalist struggle. Sadly, the U.S. government with the cooperation of local Cuban elites proved them correct. After the war of independence, capitalist exploitation on the island was intensified.

Nevertheless, anarchists in Cuba continued their various projects, advocating decentralized self-organization, and challenging the authoritarian practices of the foreign and domestic elites who were blocking the way to the broad social change that so many desired. They continued to criticize centralization and the concentration of wealth, along with the degradation of the environment and human physical and mental health caused by the greed of those in power.

There were major crackdowns against radical activities in Cuba from 1914 on, and the anarchist movement was severely impacted. However, anarchists continued to be influential because they refused to compromise with the ruling powers, persisting in militantly advocating and disseminating perspectives that challenge their authority.

On the other hand, beginning in the 1920s operatives of the Cuban Communist Party (Partido Socialista Popular, PSP) chose to make compromises with the various dictatorial governments in order to be allowed control of the labor unions and other perks. The Communist-dominated Cuban Workers Confederation (Confederación de Trabajadores de Cuba, CTC) purged anarchists and other militant labor activists.

In response, anarchists formed the Libertarian Association of Cuba (Asociación Libertaria de Cuba, ALC) in 1943. The ALC challenged the government and the Communists, while working to resurrect independence and autonomy within the labor movement. In the 1950s, the ALC joined other revolutionary groups in armed resistance to the dictatorship.

By the time that Castro’s men landed in Cuba in 1956, the ALC had groups functioning throughout Cuba—in Havana, Pinar del Rio, San Cristóbal, Artemisa, Ciego de Avila, and Manzanillo. Anarchists challenged the dictatorship in the cities through their participation in revolutionary movements such as the Directorio Revolucionario and the Federation of University Students.

In addition, the ALC meeting hall became a center for the distribution of information related to the struggle as well as a place where some of Castro’s July 26th Movement members trained to use firearms.

Immediately following Castro’s takeover in 1959, anarchists joined in what they hoped would be the long-awaited social revolution. But they became increasingly disturbed about the new government’s top-down, centralized, bureaucratic solutions to Cuba’s pressing social problems.

By March of 1961, it became impossible for anarchists to voice their concerns openly as their publications and organizations were shut down and activists imprisoned. Many, but not all, chose exile where they could continue to openly advocate anarchist alternatives.

Kirwin Shaffer’s contextualized history makes it clear why and how anarchist inspired oppositional activities have never been extinguished on the island, despite ongoing government supervision and surveillance, along with periodic political crackdowns.

As long as anarchist rebels in Cuba are able to dream of and create autonomous, non-authoritarian projects, the future holds multiple possibilities for individual freedom and social solidarity.

SK is a longtime supporter of Cuban anarchists.