Rebellions Rock the World
But, is there still a vision of revolution? 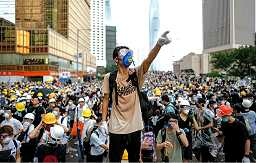 In the latter half of 2019, the streets of Hong Kong, Santiago, Barcelona, Baghdad, London, Paris, and Beirut were flooded with huge demonstrations demanding reforms or the removal of politicians.

All displayed the outward exuberance of mass revolutionary upsurges, but generally raised only demands for fair governance rather than revolutionary alterations of the countries in which they are occurring.

However, isn’t every rebellion inchoate revolution when people burst through permissible boundaries? Doesn’t the burning anger at those in power, even if the demands are only for less corrupt rulers, bring with it a joy and solidarity missing in daily life? Revolution is rarely a first resort.

However, there is the pessimistic possibility that the 200 year history of the defeat of radical movements against capitalism and the state has scrubbed from the popular imagination and vision the idea of a complete transformation of society. The triumph of capital following the Age of Revolution that lasted from 1848, after the early resistance to class society and industrialism, to the 1939 defeat of the Spanish Revolution, may have so secured the rule of capital that it now seems unassailable and the best that can be hoped for is a less punitive and more equitable administration of the system. Or, at least that’s what the rulers hope is the case.

None of the movements confronting their governments are products of decades of revolutionary organizing with a vision of a new society, but rather are spontaneous objections to a range of grievances. Will they reinvent forms of community and struggle different than the ones that have failed in past heroic attempts to overthrow the prevailing system, or will they be satisfied with cheaper gasoline and a new face in the president’s or prime minister’s chair?

One suspects this will be answered by the time you read this or soon after.

One curious facet is the reaction to the uprisings by the American corporate media which have become almost uncritical cheerleaders for direct action.

Until recently, you could count on the corporate media to slander all autonomous protest movements that took to the streets by misrepresenting their demands, vastly undercounting the number of participants, and lecturing activists that the proper venue for grievances is at the ballot box.

For instance, in the October 20 New York Times, David Leonhardt titled his column, “Want Trump to Go? Take to the Streets,” writing, “Another moment for public protest has arrived.” It strains memory to recall when the Times ever before advocated direct action.

This change in reporting style has its roots in the massive 2017 Women’s March on Washington the day after the inauguration of Donald Trump as U.S. president. It was the largest single day protest in history with millions participating in 672 cities across the world denouncing the election of a right wing opponent of all the liberal reforms of the past 85 years.

The U.S. marches were covered uncritically by most major media, filling hours of broadcast time. Speakers advocated a wide range of human rights and environmental concerns. It was as if progressive activists had taken over the national TV and cable networks as well as the country’s largest print publications.

In 2019, the media seemed similarly enamored with demonstrations erupting in cities across the globe. Usually, media outlets focus on small acts of violence within mass actions to discredit an entire event. But, particularly in Hong Kong, reporters and editorialists mostly support the months-long campaign against the government. When not simply ignoring violence, they were quick to explain it away as a result of frustration felt by demonstrators due to the intransigence of ruling politicians.

Just as startling is the sympathetic coverage of the tragedy that unfolded in October when the Turkish invasion of Syria crushed the Kurdish independent, self-governing enclaves in the Rojava border region. The destruction of communities inspired in large part by anarchist Murray Bookchin’s concept of Municipalism, featuring an ethos of women’s liberation, religious tolerance, and self-determination, is a social and political catastrophe.

For the media, even a hint of radicalism on the part of protesters is usually enough to elicit a rabid denunciation of an action or stigmatizing a campaign. But in this case, the Kurds were portrayed mostly as U.S. allies who defeated ISIS alongside American forces. When the new set of social relations present in Rojava was mentioned, it was usually referred to as “an experiment,” and described sympathetically.

A New York Times dispatch, while reporting glowingly about what had been accomplished in Rojava, referred to Bookchin as “a Vermont-based philosopher,” apparently to avoid invoking the dreaded “A” word.

Even Republican politicians were critical of Trump’s green-lighting the withdrawal of U.S. troops from the region in October, a move which forced 300,000 Kurdish residents to flee and allowed invading Turkish troops to begin a massive ethnic cleansing campaign and counter-revolution.

Rojava offered a model for social revolution, much like that of the Zapatista Rebellion a quarter century ago, providing a hopeful vision of altered social relationships forged within a civil war and Kurdish combat against ISIS.

The story of the Rojava Revolution has a parallel to 1930s Spain: just as North American anarchists traveled to Spain to help defend the Revolution, several went to the Middle East to fight with the Kurdish Syrian Democratic Forces (SDF) which suffered 10,000 casualties in battles against the reactionary Islamic State in Iraq and Syria.

It’s not clear what options the Kurds have. Their history is one of oppression in the countries where they live and betrayal by big power nations. In their new dependence upon Putin and the Syrian dictator Assad, is undoubtedly one in which the Kurds can hear the knives being sharpened for their eventual slaughter.

In the U.S., where large demonstrations are mostly tolerated, people who want Trump removed from office haven’t responded in great numbers to the Times columnist’s call for street action. The question remains, though, why a sudden support for non-parliamentary actions from media sources that previously ignored or scorned them?

It may be that the liberal wing of the ruling class realizes that Trump at home, other right-wing governments around the world, and an uptick in fascist organizing are a hindrance to a smoothly operating capitalist system. It’s not as though the rulers sat around a table and decided to give their media permission to encourage demonstrations, but something they realize reflexively, memory having reminded them that a fascist response to crises doesn’t work out well for them.

The American codification of “the right of the people peaceably to assemble, and to petition the government for a redress of grievances,” in the U.S. Constitution is somewhat surprising since many of the Founding Slavers had a profound distrust of those in the classes below them. Alexander Hamilton feared the people and loathed mobs. He is quoted as calling them “the great beast,” one that couldn’t be trusted with governance.

In Hong Kong, it is a desire for a safeguard against being swallowed by the authoritarian Chinese party-state. In Barcelona, it is outrage at the imprisonment of Catalan nationalist leaders. In Santiago, Beirut, Paris, and Baghdad, the anger arises from economic issues. None of the demands exceed what can be granted within the system that spawned the anger. Public space is occupied only for the time of demonstrations although there have been successes in prices being lowered and politicians have resigned.

In London, environmental demonstrations are smaller than those in the other cities, but the disruptive tactics of Extinction Rebellion, speaking for the fears of a young generation concerned about what future is in store for them, have closed sections of the city employing innovative tactics.

They realize, at this point, without an immediate worldwide commitment to end the use of fossil fuels, rising tides threaten to inundate major coastal cities and create even more extreme weather patterns.

Extinction Rebellion’s direct actions involve support for radical reforms and hope that blocking traffic and bringing cities to a standstill will force the rulers to embark on policies that address climate change with the energy necessary to forestall the looming catastrophe.

Within their model is an appeal to major corporations to recognize that sustainable energy and sensible production will benefit them financially. This is undoubtedly driven not so much by a desire to support capitalist solutions, as it is a realization that corporations wield the ultimate power worldwide and it is unlikely that popular decision making can be instituted in time to save the planet. No critique of the industrial system itself is offered; only how it is powered.

Hong Kong, ten years ago, was considered a model city with inhabitants who were, for the most part, politically passive. But in early 2019, the great majority of the population began reacting in anger against a proposed law permitting extradition of individuals to mainland China. Coming as it did after the kidnapping and jailing of dissident publishers on the mainland and the harsh sentencing of activists of the 2014 “Umbrella Protests,” the bill was correctly perceived as a threat to basic rights and freedom.

Starting last June, there followed months of mostly spontaneous mass demonstrations with participation numbering consistently in the tens to hundreds of thousands. Although their demands seem rather mild, on the practical level they focus on maintaining to what the Hong Kong population has become accustomed, free from Chinese interference.

But perhaps on a deeper level there is something much different going on. That so many people are involved in a culture of resistance bespeaks of a desire for more moments of authentic joy anchored in human solidarity, something that can’t be manufactured by the glitter of a consumer society.

Almost daily, downtown Hong Kong is transformed into what Hakim Bey calls a “temporary autonomous zone,” a place where a new world can be imagined and built.

The corruption and economic deprivations experienced from Beirut to Santiago to Paris are real, but there may be a deeper driver of what appears to be only radical reformism on the surface: a desire for a different world in which the solidarity and excitement of the streets can come to define all of life.

Paul Walker is a long time friend of the Fifth Estate who lives in the Detroit area.