Is the government ready to say Fuck The Draft? 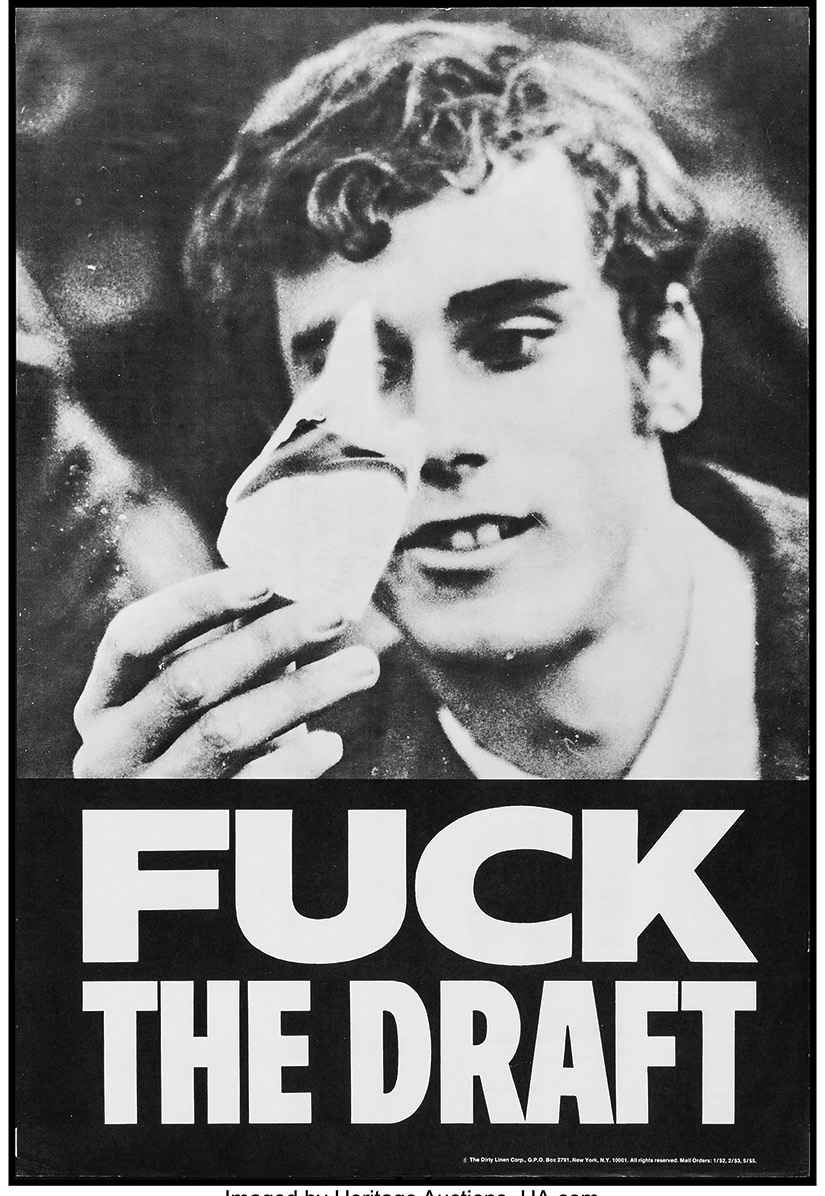 Since its origin 55 years ago, the Fifth Estate has always supported draft refusal and mutinies among the troops as the best tactics along with anti-war mass demonstrations for stopping the empire’s endless wars.

However, a bipartisan bill is currently before the U.S. Congress that would abolish the requirement for draft registration and related penalties. This is welcome, but the impetus for it isn’t a sudden commitment to peace or a realization that conscription is slavery.

Draft registration is only being considered by the government because mass armies are no longer a necessary component of imperial war fighting. Military planners judge that troops needed for future interventions exist adequately in the volunteer, hyper-loyal Praetorian Guard and non-human war machines and cyberwarfare programming.

Representatives Peter DeFazio (D-OR) and Rodney Davis (R-IL) introduced the bill to repeal the Military Selective Service Act meaning that young men would no longer be required to register upon their 18th birthday for a possible military draft in the future.

It also would prohibit penalties for nonregistration such as barring college financial aid, driver licenses, state jobs, or naturalization as a US citizen, and other practices through which states attempt to enforce draft registration. It maintains the rights of conscientious objectors who oppose war on ethical or religious principles. It removes the lifetime sanctions for nonregistration imposed by dozens of state laws.

The second part may seem contradictory, but it assures that those who have been penalized over the past 40 years of required registration will no longer suffer from their courageous choice. Millions of men are not in compliance with the law which requires a current address be on file with the Selective Service system.

The House bill includes everything anti-draft and anti-war organizations and activists asked the National Commission on Military, National, and Public Service (NCMNPS) to include in its recommendations to Congress. According to anti-draft activist and former political prisoner for draft registration refusal, Edward Hasbrouck, Congress won’t take up the bill until after the election this year and may instead extend draft registration to young women to deal with challenges stemming from having only men being effected.

The latter choice could create a great social upheaval on the part of women amidst the chaos created by tens of millions of women being forced to register and perhaps the launching of a new anti-draft, anti-militarism movement.

See FE #405, Winter 2020, “Will there be a new military draft?” by Edward Hasbrouck, and resister.info. Thanks to Edward for the information in this article.

FUCK THE DRAFT — First issued in 1968 during the Vietnam War. The ultimate refusal of forced conscription. Burning draft card photo from 1967 March on the Pentagon.

FUCK AUTHORITY — Originally an enclosure in a 1976 Fifth Estate issue.

Posters are reproduced on 23 by 36 inch 90 lb gloss photo paper; mailed rolled in a cardboard tube.

$25 plus $5 postage for a subscription and one poster

$35 plus $5 postage for a subscription plus both posters