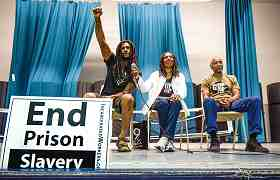 After surviving a police siege on their Philadelphia home and forty years in prison on frame-up charges, Mike and Debbie were released from prison in 2018. They were imprisoned along with seven other members of MOVE, a revolutionary environmental Black liberation organization, in 1978.

FTP conducts grassroots organizing, advocacy and direct action to challenge the prison system. Their 2020 convergence is announced on their web site fighttoxicprisons.wordpress.com.

Michael Africa, Jr. was born in his mother’s prison cell. He is touring Europe this spring and summer with singer/songwriter David Rovics.