“Reparations “ Theatre Review
What can repair the trauma we all suffer? 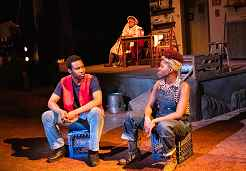 Reparations examines inherited historical trauma, whether that trauma can be healed, and, if so, how.

It goes beyond simple ideas about monetary payments to historically oppressed groups, and raises the question of how social trauma can ever be overcome.

Sparked by the current discussion about reparations, the play examines what the implications could be if society started taking responsibility for historic injustice. But, recognizing that there’s a difference between compensation and healing, the play suggests what we would know if trauma was manifest rather than implied by people’s behavior—as if everything that happened in the past could be understood as part of present reality. Could we live with such knowledge? And whose family hasn’t at some point been affected?

Sound Theatre Company’s mission is to “empower artists to give voice to the dignity and diversity of the human experience—moving audiences toward a more just and compassionate world.”

It particularly emphasizes plays written and directed by African-Americans, and the cast of “Reparations,” like its other plays, is mostly Black. Set in Oklahoma in the near future, with flashbacks to the 1920s and the 1940s, the play uses a science-fiction premise—that our ancestors’ traumatic experiences get coded into our DNA in a way that makes it possible for them to be relived in the present.

A new device, using a drop of blood, makes it possible for someone to witness those experiences as if they were there. The State of Oklahoma, in an apparent attempt to make good on past wrongs, is offering compensation to anyone who can show, by reliving the experiences in their DNA, that their ancestors were wrongfully injured by the State.

The main character, Rory, played convincingly by Aishe Keita in the Sound Theatre production, is descended from survivors of a mass lynching of Blacks in the 1920s, a mob action supported by the local Oklahoma sheriff, reminiscent of the historic Tulsa massacre of 1921.

She decides to relive the trauma, which is part of her family’s oral history, and apply for compensation. It turns out to be not that simple. Witnessing the awful events brings to her own consciousness things she’d never known about that are weighing her down.

Even worse, after reliving her great-grandparents’ trauma, she is told that, while she would normally be due some compensation, one of her cousins spent years in the penitentiary for murder, and the costs of “his choice to become a ward of the State” have to be deducted from any money she would receive.

In trying to disprove her cousin’s guilt, she discovers that there was unacknowledged trauma committed inside her own family—and who owes the compensation for that? In her pursuit of the truth, she gains an unlikely ally in a government bureaucrat, Pramesh (played by Bharan Bikshaandeswaran), and, when Oklahoma abruptly decides to defund the project, persuades him to drill down further into history than the records show.

The result is a complex interweaving of themes, which sometimes works and sometimes doesn’t. Rory’s cousin Maceo (Brandon James Mooney) makes the case that he’s owed something for the betrayal by her grandmother (Tracy Michelle Hughes) that sent his father to prison and destroyed his family. The actual scenes of trauma are gripping but never exploitative.

One clear message of the play is that having the government handle the question of reparations may be problematic—because its agenda for such compensation is likely to be focused on laying the past to rest, walking away from it so that supposedly everybody can move forward together into the future.

Canady suggests that historical trauma is ongoing and the reason for reparations is not so much to get a certain sum of money as to get groups and individuals to recognize that oppressive actions, no matter how long ago in the past, continue to have an effect in the present. They may not be literally passed down in the DNA, but the things people do because they’re traumatized change other people’s behavior and abilities in ways that can be passed down from generation to generation.

In the deepest sense, there is no compensation that can be adequate; what’s needed is sincere acknowledgment and ongoing allowance for the ways that people have been injured by society across generations. Victims of trauma may themselves create trauma—so that their descendants may have to reckon with the crimes of their ancestors as well as their victimization.

Looking back over American history, it’s easy to see that this applies far beyond the issue of reparations for slavery, which is where the discussion has been centered for some time. It includes all the traumas perpetrated against people of color; but, also, it includes the violent traumas perpetrated against women, against working people, and against religious, political, and sexual minorities throughout our history.

Canady raises the question of how we can deal with the complexity of collective trauma, but he doesn’t resolve it in a satisfactory way. Rather, he leaves us with the question. What we do have, he suggests, is love—in the case of his characters, the love that’s present in the extended family descended from Rory’s great-great-grandparents. But it’s unclear how the historical memory of love can play out on a larger stage, such as the country itself. A better beginning might be compassion—compassion for the ways that so many people have been injured by the violence of oppression, and for the ways in which they need to be made whole.

Mike Wold is a songwriter and musician, and a volunteer and contributing writer at Real Change, the street newspaper in Seattle.