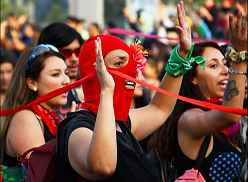 Women have a lead role in the protests. The Red Masks in Resistance movement created ¡El Violador en Tu Camino! (The Rapist in Your Path), an anthem protesting violence against women that is performed all over the world. Photo: Orin Langelle — photolangelle.org. Langelle is an activist and award-winning documentary photographer whose work spans five decades on five continents. He is the Strategic Communications Director for Global Justice Ecology Project.

When democracy returned in 1990, the neoliberal model continued, producing an enlarged economy with a super-rich elite, extreme social inequalities and class segregation while devastating the environment. For thirty years, most Chileans suffered the effects of this social-economic system.

But popular resignation dissolved on October 18, 2019 when an insurrection broke out that is still ongoing. It began in the capital city of Santiago and rapidly spread to more than twenty cities and small towns. That day a large number of demonstrators rioted in response to police brutality against high school students.

A week earlier students had organized a massive fare evasion on the Santiago Metro to protest a fare price increase. They sparked public sympathy and raised political awareness. The four-cent hike on the Metro was the final straw that caused a social uprising. Since then, a revolution has unfolded, undermining the legitimacy of the state and its institutions while empowering ordinary people.

This isn’t an armed revolution that aims to control the state, but instead seeks to eradicate all forms of repression and replace the state’s role as facilitator of corporate goals with robust and well-funded social programs.

New and fresh, this revolution is based on a massive movement that doesn’t demand changes in representation. Rather, it allows people to move forward toward autonomy and cooperation.

Primera Linea (PL) is a group of thousands of activists, men and women, forming the frontline of the protests in Santiago and other Chilean cities. They enjoy great support for their forms of direct action.

They coordinate horizontally through social media, bring shields to repel police projectiles, destabilize police drone sensors with laser pens, and share a solution of baking soda and water to alleviate the effects of teargas. Wearing helmets, goggles, gas masks, gloves and other protective gear, they are the human shields that protect demonstrators.

PL members break up concrete with hammers and carry the pieces in wheelbarrows to wherever there are confrontations with the police. They also confront people who engage in pointless vandalism, such as the burning of Violeta Parra’s Museum, which is dedicated to a celebrated folksinger and poet, or the destruction of community-centered buildings. They also prepare food to share among demonstrators.

This collective experience is bringing people together and changing society radically by replacing the notion of the individual as a self-centered consumer with a sense of community and collaboration.

As of this writing, 3,765 people had been injured during demonstrations or tortured by police; 445 have suffered eye injuries, leaving two people blind.

A 21-year-old psychology student, Gustavo Gatica, lost his vision when police shot rubber bullets at his face. “I gave my eyes for people to wake up,” he said after learning he was blind. Since the beginning of the uprising, 36 people have died under various circumstances. Some were shot, run over or beaten by police or military. Some were found dead in supermarkets that were set on fire. No one has been held responsible for the arsons. Others died in prison, supposedly by suicide.

Although there are charges against a dozen police officers for human rights violations, to date none of them have been imprisoned.

More than 10,000 protesters have been arrested, and more than two thousand still remain in police custody.

The Chilean National Prosecution Office reported 5,558 human rights violations. This level of brutality has triggered the worst memories of state terrorism during the Pinochet dictatorship.

The government is attempting to normalize the use of extreme violence and repression as a response to any and all protests. The effect is to retraumatize society.

Primera Linea has been crucial in counteracting this by occupying urban spaces and setting up mobile first-aid centers to take care of the wounded. This strengthens collective courage and reveals new possibilities on the ground.

Plaza Italia (renamed Dignity Square) has become ground zero, the center of a ten-block area in downtown Santiago. This was the focus on October 25, when 1.2 million people marched against both the state of emergency declared by President Sebastián Piñera and his deployment of 20,000 troops.

“Chile is at war with a powerful and implacable enemy,” he said, reviving the doctrine of domestic enemy to criminalize any expression of dissent. But the response to Piñera’s war declaration was so overwhelming that the government revoked the emergency declaration and curfew and sent soldiers back to the barracks. As a result, eight ministers resigned, including Piñera’s cousin, Andres Chadwick, who had also been a minister under Pinochet.

However, these concessions didn’t pacify the population who remained ungovernable while deepening the revolution.

After October 25, power relations changed, delegitimizing the ruling class as representatives of the people. According to a January CEP National Public Opinion Survey, only five percent of the population supported the government, and less than four percent recognized the Congress and political parties as valid representatives. Distrust of the police reached 80 percent.

Throughout the uprising, anarchist and anti-authoritarian collectives have continued growing by making connections with individuals and groups in different segments of society. Anarchist ideas are becoming more and more popular.

Las Tesis (The Thesis) is an anarca-feminist collective from Valparaiso who created the performance piece titled “Un violador en to camino” (A Rapist in your Path). Written as a subversion of the familiar Chilean police anthem, “A Friend in your Path,” the piece has been performed by many women’s groups around the world.

Presented in Valparaiso’s Plaza Anibal Pinto (renamed Resistance Square), the clarity of its lyrics denouncing patriarchal violence is absolute: “Patriarchy is a judge...it’s violence you see...it’s disappearance...the oppressive state is a macho rapist.”

At the same time, the non-governmental left organized the centralized Mesa de Unidad Social (Social Unity Board), comprised of about 150 grassroots organizations and unions. This coalition called for national strikes in October and November 2019. It tried unsuccessfully to capitalize on the insurgent movement, claiming to defend citizen’s rights and achieve political and structural changes. The coalition tried to negotiate with the government but failed because the ruling class didn’t and doesn’t want structural changes. As a result, most Chileans have come to realize that the only way to push for change is through a massive insurrection.

When the political elite signed the Agreement for Social Peace in mid-November, and agreed to a plebiscite on replacing the 1980 Pinochet constitution with a more democratic one (scheduled for April 26, 2020), they were hoping to gain time to pacify the population. But they didn’t succeed because the agreement excluded popular participation. Protests continue and are expected to intensify leading up to the plebiscite.

Mayors took the initiative and called for town meetings, organizing an alternative referendum in December. The result was clear-91.3 percent of Chileans wanted a new constitution. Although this strategy is problematic for radicals who primarily focus on self-determination, such a change could eliminate neoliberal vestiges from the Pinochet era, making education and healthcare inalienable rights while adopting a public pension system.

Street graffiti and banners show these are the main demands. Regulating corporate profits, recognizing indigenous rights and autonomy, protecting the environment, and redefining the family to include partnerships involving transgender and non-binary individuals are also demands.

This horizontal revolution without leaders, political parties or spokespersons behind it, makes it impossible for the government and the elite to co-opt the movement because there is nobody with whom they can negotiate.

This leaderless insurgency is causing the entire establishment to crumble. The right wing is divided. The official opposition, including centrist parties such as the Christian Democrats, as well as Socialists and Communists, are mired in congressional disputes. The new third option, Frente Amplio, a progressive, broad front party, is fractured. There is an abyss between politicians and the populace.

Cabildos (town meetings) and constituent councils are the main spaces for political discussion. There are also hundreds of self-convened territorial assemblies throughout the country. These forms of popular self-governance are remaking the social fabric.

Until last year, Chile was considered a capitalist oasis in the region. But behind the facade, labor exploitation and unsustainable expectations for consumption, psychological stress and ecological devastation was smoldering. Now, everything has come to the surface, and there is a chance for a thoroughgoing social transformation.

Jesús Sepúlveda teaches at the University of Oregon in Eugene. He is the author of eight collections of poetry and three books of essays, including his book on Latin American poetry, Poets on the Edge.