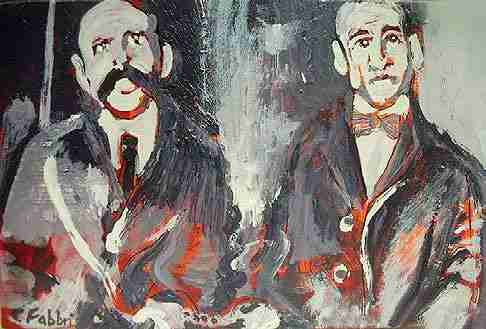 “Bartolomeo Vanzetti and Nicola Sacco”
Chris Vanzetti
The artist’s great grandfather, Amleto Fabbri, was the Secretary of the Sacco-Vanzetti Defense Committee.
This painting references the famous photograph of the two anarchists.

Bartolomeo Vanzetti lived in Plymouth, Mass., when he and his comrade Nicolo Sacco were charged with robbing a factory payroll and murdering two guards, a crime they did not commit, but for which they were executed in 1927.

Vanzetti was tried separately on an earlier charge of an attempted robbery in 1919, on a day on which he was delivering fish with his helper, the teenaged member of a Plymouth family with whom he lived for four years.

“How did you find me?” the music teacher asked with a sigh.

The man shrugged. “Kept asking around,” he said.

It had been a long time since a reporter knocked on his door. The teacher shook his head, silently talking to himself. He’d thought he was done, at last, with all that.

Beltrando Brini, now well into middle life, was short and slightly built, his fine brown hair thinning on top. Music has always been at the center of his life, since childhood.

Now he eyed the reporter, a tall man, considerably younger than himself, though his fine yellow hair, cut short, was also thinning at the forehead.

“May I ask you some questions, Mr. Brini?” the stranger said, his eyes and manner expressing the desire to be invited into the house.

Bel recognized the type. He would not be easy to get rid of. It would be quicker, in the end, to get it over and done with now He nodded and stepped back to let the stranger enter.

At his host’s gesture, the reporter, Langley, sat on the edge of the sofa, his open notebook resting on a knee. “You knew Vanzetti, I understand,” he said, “as a child.” “Yes...He lived, boarded, at our house.”

“Uh-huh,” Langley said, not yet writing, “but, he was not just any boarder.”

If you know, Bel wondered, why ask? “He was a friend.” Oh, he shook his head once more and urged himself, silently, “Might as well tell the whole thing.”

“He was like a father to me. A spiritual father.” Was that hard for someone else to understand? “He talked to me. He was interested in my life. He encouraged my music, asking me to play for him when I was barely able to hold the instrument steady or know where to put my fingers.”

The man was writing now.

“My father—my real father,” recalling everything now, holding nothing back, “barely spoke to me. He was exhausted. He worked in the factory. The Cordage. For forty years. It took all the life out of him...So, Vanzetti...”

He loved him, the realization swept over him, like a father. For some reason Bel did not wish to say this aloud. He did not wish to feel his sadness all over again. He wished that Deema would come home and help him answer the questions.

“Away?” Langley looked up from his writing. “When was this?”

“The war year. He did not wish to be drafted.”

“They used it against him, yes, that he refused to serve his country. But that was the big trial, the one that everybody knows about. The one I testified in was the first trial, when they were setting their trap.”

The reporter repeated his words, getting the distinction right. “The trial that was just Vanzetti,” he said, “not Sacco. The one where they accused Vanzetti of taking part in a payroll car robbery attempt.”

“He was tried in Plymouth.” Bel heard his voice go cool, stoic. “In the courthouse in the center of town.”

“He had a lawyer?” Langley asked.

“Yes, they had hired him, Vanzetti’s supporters.” He remembered this fool of a lawyer with a grimace. “But he was no good. He was working for the other side.”

Come on, Bel urged himself mentally, get to the heart of it.

“We had witnesses. I was one of them. This big-nothing crime. Someone fired a shotgun at an armored car in Bridgewater and then gave up the whole business and drove away. They tried to say the shooter was Vanzetti, but we had witnesses for where he was all day.”

“And you were the main witness?”

“Yes, I was with him all that morning, delivering the fish. It was Christmas Eve.”

“Yes, that’s why we were so sure of the date. We delivered them all over the neighborhood. First, Vanzetti pushed the cart all the way from Plymouth Station to Hedge Street. I met him there. He was tired.” Even on that December day, he remembered, his friend was perspiring from shoving the heavy cart down block after block. “So I pushed the cart the rest of the way to the neighborhood. Then he pushed, but I delivered the fish to the houses. Then, we took turns. He delivered to one house, then I delivered to the next house.”

“And you’re sure this was the day of the crime?”

“It was Christmas Eve!”

Did this fellow think no one has asked him this question before?

“You don’t mistake that date. And on Christmas Eve, Italians want to eat fish! That’s how we all celebrated, especially back then!”

The reporter nodded, then lowered his eyes.

“You are not even writing this down,” Bel observed. “Well...“The man looked up, his expression a guilty acknowledgment.

“Then, if you know the whole story, why did you come here? Others have written this story before. Long ago.” When his visitor still hesitated, Bel broke out, in exasperation, “You’re not really a reporter!”

The man lifted a hand. “I am a reporter. I mean was. Springfield Union. But the thing is,” a look of appeal, “I’m trying to write a book now.”

“I started out looking to settle the question once and for all, but...” He broke off “I mean, a generation has passed. Maybe there were clues, some pieces of information that didn’t seem important back them. You know, something overlooked.”

“I don’t know” Langley shrugged, then something changed in his manner that put Bel on his guard again. “Maybe people have changed their ideas over time. Become a little less, well, certain about what they thought they knew”

Langley paused, took a breath. “I mean, everybody took a side back then. Were they guilty? Were they innocent?

“Doubt?” Bel echoed. “There were no doubts. Do you mean, perhaps, that missing hour when Vanzetti dropped the pushcart to the sidewalk and raced over to Bridgewater in the automobile he never possessed to fire a shotgun, which he never owned? To try to steal the money that he never wanted? No.” He shook his head.

He waited, but the reporter was silent.

“No, there were no doubts in my mind then,” Bel told him, grimly, “and no doubts now.” He was a small man who loved the violin, taught himself how to get along with others, and did not anger easily. But he was no longer a boy. No longer a traumatized adolescent, hiding from his pain.

“There has never been any question about what happened that day. Or about the other case either. The Braintree payroll robbery? The cold-blooded killings of the guards?” Bel touched himself on his heart. “That Bartolo Vanzetti, the man I grew up knowing,” and loving, he added silently, “would ever willingly hurt another human being. To steal money? From workers’ pay?”

By the time Deema came home, Langley was gone. He did not get what he came for, Bel considered, but perhaps his visitor understood the tenor of those times a little better than a man of his generation would simply by looking at words on paper. How hard life was for those who had come to this country in search of a better life. The humiliation of being regarded as unworthy of public trust. Bel would never forget that. He had told them the truth at the Plymouth trial, and years later he told it again in the governor’s office—and yet he could not make them believe him.

Still, he thought, he was one of the lucky ones, his comfortable life benefiting from his parents’ sacrifices.

When he heard Deema’s key in the door, he played a few more notes, a final phrase, before dropping the bow.

“I haven’t heard you play that one for a long time, Beltrando,” Deema said, taking off her winter things, the gloves, the pretty scarf, the hat with the skin of artificial fur.

“The Adagio,” she continued, when he did not reply at once, “in G. Albinoni?”

“And the reason? The same?”

Robert Knox is a poet, fiction writer, Boston Globe correspondent, and author of Suosso’s Lane, a novel based on the notorious Sacco and Vanzetti case. He is a contributing editor for the online poetry journal, Verse-Virtual, and the winner of the 2019 Anita McAndrews Poetry Award. robertcknox.com.