The Paris Commune, The Right To Be Lazy & Surrealism
The People Ruled the City for Three Short Months

This year marks the 150th anniversary of the Paris Commune, an experiment in self-governance that is still inspiring today. It was born in response to the suffering caused by the Franco-Prussian War and the betrayals of the French central government.

Napoleon III’s Second Empire declared war on Prussia on July 19, 1870. The French troops were summarily routed by the Prussian military and surrendered on September 2. On the 4th, outraged and rebellious Parisians declared the end of the regime and announced a republic with a provisional government. The Prussian troops cut Paris off from the rest of the country and a brutal siege of the city began.

The Prussian monarchy used the war to consolidate its dominance over several other Germanic principalities and formed a centralized nation-state.

In February 1871, a peace treaty was signed between the French Provisional Government and the new German State, but the rebels of Paris refused to surrender. Some of the battalions of the National Guard, the organized militia created by the Republic to protect Paris, formed their own Central Committee with elected commanders to continue protecting the city.

On March 18, to fulfill their peace agreement with the new German state, the French government sent troops into Paris to remove artillery located there. They were confronted by a crowd of women who refused to give up the cannons stationed on Montmartre, a hill overlooking the city. 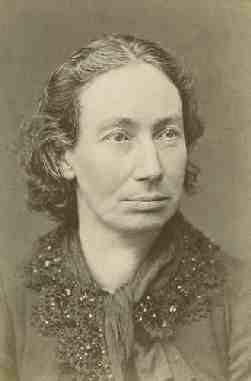 Among the women was Louise Michel (1830–1905), a poor school teacher with egalitarian hopes and desires. In the days that followed, Michel participated in organizing women to fight for the Commune on the barricades and against discrimination inside the Commune. In later years, she became a well-known anarchist.

That day in Montmartre, the women talked with the troops and brought them food and drink. They convinced the soldiers to leave the cannons where they were. Their officers ordered them to fire on the crowd, but the troops refused and turned their guns on their officers. Two generals were killed.

Radical Parisians went on to declare the Commune on March 28. A network of neighborhood popular clubs were established. Citywide elections created a council which proclaimed Paris autonomous and asserted the desire to recreate France as a confederation of self-governing communes.

The communards also established self-managed workers’ associations and cooperatives. By May, 43 Parisian workplaces were cooperatively run and the Louvre Museum was converted into a munitions factory run by a workers’ council to provide for the defense of the city.

Although anarchists were not in the majority in the Commune, many played influential roles, including the Reclus brothers, Eugène Varlin, and Gustav Courbet.

The Paris Commune was the first major French event to be photographed. Bruno Braquehais (1823–1875) published a book in Paris during that time containing over 100 photos of life in the city during the period. Michael Löwy’s recent book, Revolutions, features many of these very moving photographs. Unfortunately, Braquehais’s book was used later by the French government to track down Commune participants.

The events in Paris in 1871 were preceded by several anarchist inspired endeavors and inherited the dreams of earlier utopians. The goal of worker self-governance in the city was anticipated by short-lived uprisings in Lyon and Marseilles in 1870. Both were strongly influenced by the ideas of anarchists, Pierre-Joseph Proudhon and Mikhail Bakunin.

The communards were inspired by earlier utopian thinkers who were considering the effects of the industrial revolution, the scientific revolution, and the consequent need for a new organization of society. They were influenced by such thinkers as Proudhon (1809–1865), the first person to call himself an anarchist in his book What is Property; Saint Simon (1760–1825) who had an optimistic view of science and technology, and Victor Considerant (1808–1893), who wrote a Manifesto of Democracy. Proudhon and Saint-Simon were influenced by an earlier utopian, Charles Fourier (1772–1837).

Fourier considered the organization of work in the modern world as both exploitative and alienating. He advocated planned communities, not too big or too small of about 1,500 persons. He pointed out that one could judge the progress of a civilization from the degree of freedom women enjoyed, and coined the word feminism.

He especially emphasized that people must be free to follow their passions, asserting that this can transform work into play. Fourier did not bother to deal with the problem of the Industrial Revolution directly because he considered it a passing phase in the history of humanity.

The Commune was crushed at the end of May 1871 when the French central government launched an all-out military assault on Paris. The troops fought the insurgents street by street for a week. Known and suspected participants in the Commune were arrested and put on trial. Thousands were executed, others were imprisoned or exiled. Approximately 20,000 Communards were murdered by the state.

There was a huge diaspora of Communards fleeing France and settling in the United States, French-speaking Québec, Belgium, Britain, Spain, and Italy, where they often had a significant radicalizing influence on the nascent working-class organizations.

Those forced to leave France included Louise Michel, who was shipped to New Caledonia, the French penal colony in the Pacific. Camine Pissarro, an anarchist who revolutionized French painting by scandalously portraying ordinary working people and landscapes, went to England. Victor Hugo moved to Belgium. Arthur Rimbaud left for England due to a sex scandal or perhaps more likely because he was photographed next to the fallen Vendome Column, a symbol of Napoleonic tyranny under the First and Second French Empires, a monument to war and imperialism. The artist Gustav Courbet, who had played a big part in the attack on this symbol glorifying war, escaped to Switzerland.

Paul Lafargue (1842–1911) Karl Marx’s son-in-law, narrowly escaped to Belgium where he wrote The Right to be Lazy, challenging bourgeois ideas about the value of work. This piece was translated into English by Chicago’s Charles H. Kerr and published by his company in 1907.

In the 1960s, Surrealists, IWW, and Solidarity Bookshop people in Chicago republished The Right to be Lazy in two editions. One had an introduction by Joseph Jablonski, and the other by Bernard Marszalek. There was also an important essay by the IWW’s Fred Thompson giving the historical context of the Commune. There have been several editions since then, including most recently, one published by AK Press/Charles H. Kerr Publishing Co.

Surrealist ideas on the possible future of society have been influenced by the Paris Commune and the earlier utopians who inspired its participants. They have looked especially to Fourier. André Breton (1896–1966) wrote a long poem, Ode to Charles Fourier, in 1946.

In 1965, Breton joined with other Surrealists to organize an exhibition in France devoted to Fourier titled L’Ecart Absolu (absolute break). Around the same time, the Surrealists named their new journal L’Achibras, referencing Fourier’s idea that human beings would develop more harmonious natures after 400 years of living in a utopia. (I was there in 1965 at the cafe in Paris when the group chose this name.)

Work is dead! Long live work! A secret connection exists between past generations and the present one. Our existence was determined on this earth by their work. Work has made us. Yet, it oppresses us and our heart’s desire is to live without work. At the same time, we have been endowed with a pressing utopian desire, a passionate dream. Why not transform work itself? Work transformed—its motor: our desires.

Penelope Rosemont is the author of Surrealism: Inside the Magnetic Fields (City Lights). She lives in Chicago.