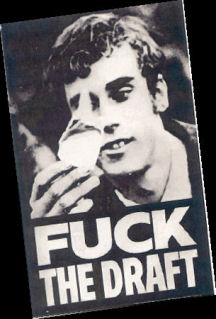 The posters depict a young man burning what might be a draft card, with the words “FUCK THE DRAFT” printed below. The man in the photo is a Detroiter, Bill Greenshields.

Kuromiya was arrested at his home by three U.S. Marshalls just hours after he had made an inquiry at the post office about a delay in the mailing. The posters were sent third class in mailing tubes along with supplementary material on how organizations could buy the posters in quantity for fund raising. Some apparently had been opened by postal inspectors.

He was arraigned before U.S. Commissioner Leomporra and charged with a violation of the U.S. Code. The charges maintain that he knowingly and unlawfully used the mails to send “an obscene, indecent and crime-inciting” poster. The charges read that the poster is “too obscene and indecent to be set forth in its entirety upon the records of this Honorable Court.” The Commissioner decided that there was “probable cause” and Kuromiya was held on $500 bail.

After being held overnight, Kuromiya was handcuffed and chained around the waist and then forced to walk seven blocks down Market Street, Philadelphia’s main thoroughfare and shopping district, to the Federal Building, where bail was met.

The date for the hearing has not been set.