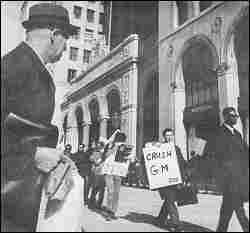 Students for a Democratic Society declared the days between April 20 and 30 as “Ten Days to Shake the (American) Empire.

Locally, Wayne University SDS led an anti-imperialist march on April 24 of over 250 persons to the General Motors Building which was seen to quiver ever so slightly in the face of the onslaught.

Mark Shapiro explained the purpose of the march was to give the anti-war movement an anti-imperialist ideology.

“We want the people to realize that the war in Vietnam is not a function of Johnson’s personality, but was a logical outgrowth of our economic system which must exploit other nations in order to survive.

“People must begin to realize that changing personalities won’t change the system. Kennedy and McCarthy oppose the war in Vietnam because they realize imperialism has been defeated there. They do not in any way oppose this country’s exploitation of Latin America and Africa.”

The group paraded in front of the building on W. Grand Boulevard for an hour and a half being observed by a handful of GM employees and a fantastic manpower over commitment of Detroit Police who brought 15 cars, 8 mounted police, and numerous undercover (?) men taking photographs.

Several speakers addressed the group including Dave Wheeler of Draft Resistance Committee who began by yelling, “This is the enemy, this is the enemy,” pointing at the massive grey building.

Randy Reynolds, Chairman of Youth for Peace, Freedom, and Justice said, “We are here to protest the killing system that GM is a part of. We are here to say that no one is going to tell us that we have to go and kill someone.” With this chants of “Hell No, We Won’t Go” began reverberating through the canyons of the New Center area building.

Jonathan Schartz, professor at Monteith College, asked that GM give up 10% of its profits to rebuild the ghetto. David Baker of People Against Racism and Rev. Lord David also spoke.

The only excitement came when the group began to march around the block-square building and were followed by the entire police contingent. Suddenly, the group reversed its course leaving several Tactical Mobile Units stranded facing the wrong way on Second and the mounted police desperately trying to ride back through the one-way traffic.

The group briefly occupied and liberated a section of the GM Chevy Division steps on Milwaukee, but the horsemen were able to make it to the scene and the demonstrators split before giving the riders a chance to do their thing. Allen Lopez of SDS summed things up by saying, This was a good day, but we will be back.”