Washington, D. C., April 28 (LNS)—Hundreds of thousands of Americans demonstrated against the war in Vietnam and in some cities against racism yesterday in parades and rallies in 17 American cities.

Lead contingent in the Fifth Avenue march that brought over 100,000 New Yorkers out to protest the war. A Loyalty Day parade the same day in another part of the city brought out only 2,700 in support of the killing.

The appearance of Lindsay at the rally led to a boycott by the Student Nonviolent Coordinating Committee. Anti-imperialist groups, which mobilized about 400 militant demonstrators for their own parade, followed SNCC’s lead. Police attacked the group in Washington Square Park because the group intended to parade without a permit. About 800 people attempted to march to the Columbia University campus to support the students there, but they, too, were attacked by police.

Police also did their thing in Chicago, violently breaking up a demonstration of over 7,000 people who had paraded to the Civic Center for a rally. When they discovered that the plaza of the center was roped off, about 200 demonstrators climbed over the ropes for a sit-in. This led the police to attack and disperse the demonstrators. More than 70 were arrested, including five at a nearby hospital, where they went for treatment of injuries.

Fifteen thousand people attended a rally in San Francisco and heard speeches by Muhammed Ali and Fred Halsted, the presidential candidate of the Socialist Workers Party. Rain kept the number of anti-war protesters in Washington, D. C. to about 700. James Farmer, Donna Allen of Womens’ Strike for Peace and Cathy Wilkerson of SDS were among the speakers. 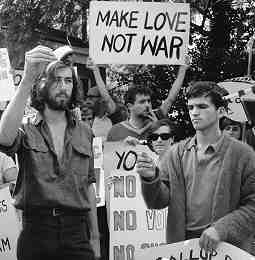 Nearly 1,000 people gathered in Albany, N.Y. for the first anti-war rally ever held in the capitol city of New York State. Three youths burned their draft cards and Sam McDowell, a member of The Brothers and co-chairman of the New York State Peace & Freedom Party, blasted the Democratic Party for claiming to help the black people, but failing to change conditions in their ghetto.