The Maharishi and Me

I saw Maharishi speak here January 21st and then went up to the Plaza Hotel that evening (I’d phoned for tickets to his organization and on return telephone call they invited me up, saying Maharishi wanted to see me)... so surrounded by his disciples I sat at his feet on the floor and listened while he spoke. 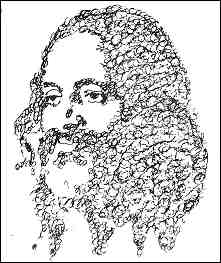 At a previous press conference I’d not been at I heard he’s said all sorts of outlandish things like poverty was laziness and I saw in “IT” (International Times, an English underground paper) his equatory communism—weakism. So after I was introduced I sat at his feet and literally started yelling at him... spoke for half an hour almost, challenging, arguing... all in good humor though his business managers and devotees gasped with horror occasionally. But I never got impolite and he stayed calm and rather sweet so no harm.

He’d been discussing U.S. “dissatisfaction” as Johnson’s phrase had been quoted to him earlier, so I said that specific dissatisfaction was among young people over the Vietnam war, and it was a problem troubling everyone in his audience that day, at least of the young people; that though the U.S. was as he said Creative, its creations were massively negative as Vietnam at this point and that’s why people were restless and looked for spiritual guidance from him and that he, Maharishi, hadn’t covered the problem satisfactorily. He said Johnson and his secret police had more information and they knew what they were doing. I said they were a buncha dumbells and they don’t know and his implicit — support of authoritarianism made lots a people wonder if he wasn’t some kinda CIA agent. He giggled “CIA?” His devotees began screaming so I said it was a common question so it should be proposed and they shouldn’t stand around silent and fearful to speak.

Then I asked what about the draft resistant kids, going to war and murder? He said either way meditate. I asked about Hari Krishna. He said one mantra won’t fit everybody. As he’d put down drugs I said there wouldn’t have been anybody to see him if it hadn’t been for LSD. Devotees gasped. He said, well, LSD has done its thing, now forget it. Just let it drop. He said his meditation was stronger. I said excellent, if it works why not? I said, I would be glad to try; can’t do anything but good. Then he said that “acid” damaged Hippies nervous systems, he had six hippies visit him in a room in LA and had to take them into the garden, they smelled so bad.

I said WHAT? you must have been reading the newspapers. He said he didn’t read newspapers. I said he likely had a misconception from his friends (at that point, I guess I said acid hippies were largest part of the day’s audience). He insisted that hippies smelled. I must say that was tendentious. His final statement on war was he didn’t want to get into that, he wanted only to emphasize meditation, meditation, meditation. I said that’s fine. I’ll meditate.

All in all I thought his political statements not so evil as dim and thoughtless, somewhat sucking up to the establishment so as not to cause opposition and trouble. But judging from voice tone of his business manager a sort of business man western square sensitive sounds like he is surrounded by a conservative structure and he would come on unsympathetic in relation to social problems. I told him major cause U.S. youth dissatisfaction was increasing military police state tendency in U.S. and spoiling everyone’s normal life and feelings which I think is a statement partially accurate and something for him to consider since he makes social generalization as apparently he does.

In a sense his position is not far from Krishnamurti of Leary [though Leary has become more political recently —ed.] stay out of politics, “avoid the authorities, get into meditation and inner peace etc.” His division of the peace problem into parts...individuals solve their own... is real enough. I don’t suppose he’s built or required to be a social utopian structure messiah. But in as much as he does stray into political generalizations he sounds inexperienced or ignorant and unfamiliarly authoritarian.

So anyway, that’s what I could come to listening and talking. He was nice to me, didn’t know who I was, asked at first what I did. I said Kovie—poet. There’s an element of too much mesmerized politeness at his darshans (public viewings)—a guru is someone who you should make it with, learn from, listen to, enquire—otherwise it’s mere “religion,” which Maharishi himself puts down as a failure.

The main burden that everyone should meditate half hour morning and night makes sense. His blank check claims that his extra special meditation form is more efficient than any other is something I haven’t tried so I can’t judge. His high powered organization method of advertising meditation is getting, like Pyramid club of people meditating and massive enthusiasm application which would certainly tend to accomplish general peacefulness if it caught on massively and universally. His political statements are definitely dim-witted and a bit out of place.