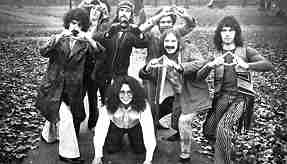 With his Groucho eyes, Punch nose and Howdy Doody body, Frank Zappa is a replete image for his particular brand of satire. The medium for his message is the presentation of The Mothers of Invention, who recently appeared at the Grande Ballroom.

While mimicking the inanities of American pop music they rip that vast musical garbage bag wide open and reveal the hang-ups behind the emergence of the spoiled heritage.

Their Tin Pan Alley pickings spill out such rotten ingredients as censorship, faggotry, racism, religious hypocrisy along with myriad dashes of other social flies.

The Mothers wear no costumes—their myriad personal styles need no uniformity—for that’s part of the bitch. The only coordinated segments of his performances are the little routines which are so well rehearsed they only point out the absurdity of the polish. The mimic of the Supreme’s “Baby Love” is a highlight; falsetto voices and hands flying they demolish the sweet images of these broads peddling a Black sexual kick in a little pink bow.

Zappa refers to his music as “total annihilation” rather than a total amalgamation of all music. “Same as a carburetor boil-out”. He also considers the success of the group “pretty piddly” compared to other less magnificent groups who are rolling in coin. He wouldn’t pin his music down to forms such as jazz or blues; but compared it instead with a group like The Cream who takes blues and interpret it, “improvisation based on what we really like to hear.” And 5 of the 9, including Zappa, started out in blues.

Frank is acknowledged as a music critic. In the June 5 issue of Life magazine his featured article on R&B of the ‘50s and The Music of the Future will be included with a story on the Mothers of Invention. The Saturday Evening Post also had a very pleasing article about the craftiness of the crew, regarding his advertising campaigns for amplifiers such as “The Destroyer.” Zappa’s immediate plans are to move to California and set up a sound studio in the basement of his 18 room pop-art mansion.

Bizarre is Zappa’s favorite word...and he deals with ordinaries taken out of context, such as his love of America’s mythical folk heroes—Mr. Greenjeans and Mr. Bluster. Despite all this, Frank Zappa is an anti-faddist carrying his thing out to the highest common denominator to delineate the vacuum it speaks of.

In an interview for BBC radio on The Restlessness of Young People Today, Zappa said, “I don’t think government really knows how to govern yet. We’re here to help you is a bunch of bullshit”. “(they) know about problems in different parts of society. Disturbances in the cities, pollution of water and air. Seems like somebody could fix it if they really cared.”

He suggested that people write-in some personal hero on ballots rather than vote for a hyped-up candidate with a charming smile on a poster. He even admitted to writing JFK a letter.

Zappa’s band members are soul brothers—Robin Hood types whose physical appearances are replete with cherubim, hippie and motorcycle gang qualities. They infuse with their music this inherent satire—adding a little celeste-like organ riff within a driving number; or accenting a far-out flute solo with hangings of the kettle drum foiling a melodic amplified bass run. Even tambourines are bizarre when combined with an almost plaintive Indian-like solo by Frank (who attributes this propensity for acid-rock Eastern raga things to his Arab-Greek origins. “I don’t think there’s anybody really likes it (the music) or really understands it outside of the guys in the band. 40% of the time they don’t even understand it. 95% of the audience do not understand 80% of our music. They don’t know what it is.”

Like all great comedians, Frank Zappa is a very serious man, slithering around with his slippery charm like a cross between Charlie Chaplin and Marcello Mastroianni. He is a social and musical reformer of the first order and his main perplexity seems to have something to do with the fact that there is still (at this late progression of civilization) the need for such basic reforms.