Times used to be when everybody loved a liberal. They had something for everybody. Times have changed and Hubert Humphrey, America’s number two war criminal can tell you that. 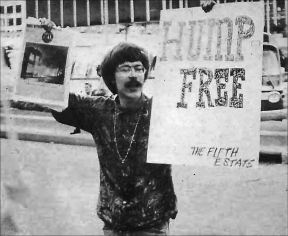 News Editor Gotkin at the HHH picket line gets it on with both hands. Photo by Mike Tyre.

Hubie made it into the Motor City on August 2 and went straight out to St. Clair Shores thinking he ought to do pretty well out in Honkie land. Bad planning. There were a lot of honkies thought Hubie wasn’t honkie enough and began heckling him with cries that he was soft on rioters and that the poverty program had “subversives” in it.

Hubie fared a lot better over at Jeffries Housing Project where he told the large crowd of black residents that he could do the boogaloo (Minnesota soul) and rapped to the crowd about the Supremes and James Brown, never once mentioning a political issue. Wow, what a racist; wonder why he didn’t mention Bojangles and Joe Louis.

Then with a Hi Ho Silver, the black helmeted Detroit cops led HHH down to Cobo Hall to speak at a concert with Trini Lopez and Frank Sinatra (honkie culture’s musical equivalent of Bob Hope).

There in front of Cobo was a picket line of 500 anti-war folks telling Hump Hump Hump to “Get out of town, punk” as it picket sign from the Draft Resistance Committee so gently put it. Other signs bore the usual anti-war slogans. The Fifth Estate staff and some friends all carried placards saying “Hump Free.”

After a dull picket line of about two hours the Oakland County Youth for Peace Freedom and Justice led a chanting crowd of over 250 surging into Cobo Hall toward the Convention Arena. They were met by about 25 police, detectives, and secret service men who let them get almost to the doors of the auditorium before shouting, “That’s far enough.”

Inside the Auditorium Trini and Frankie were knocking ‘em dead with Hubie thinking about the $125,000 that he was going to pick up for his campaign fund.

Outside, in the lobby, the demonstrators began chanting and the police began trying to push the crowd out of the building.

A scuffle ensued in which a cop knocked down a girl wearing a McCarthy pin and a burly detective had his walkie-talkie thrown to the ground and smashed by a demonstrator.

When the burly pig tried to recover his radio he was knocked to the ground and the culprit escaped into the crowd. Angered by this the pig arose and pointed at Denny Dunn, head of YPFJ, and said, “Arrest him; he’s one of the leaders”. He then spotted Carlson Tuttle who was carrying a black flag and had him arrested also. If you got a flag, you must be a leader.

After it became clear that the police were moving in all sorts of heavy reinforcements for what looked like a crunch scene, the group decided to go down to police headquarters and demand the release of the arrested men.

Once at Beaubien Station, attorneys Ron Reosti and Bill Segesta told the crowd of perhaps 75 that the men would be arraigned in Recorder’s Court the next morning on charges of Interfering with a Police Officer.

The next day Judge Joseph A. Gillis bound the two over for trial and set their bond at $1,000 cash each. The charge carries a penalty of up to a year in prison.

IMPORTANT! Witnesses are needed by Carlson Tuttle and Denny Dunn who saw the events leading up to and involving their arrest. Call Carlson at 831–2734 or Attorney William Segesta at 963–2500.