Chicago and the Democratic Convention were the end of a fantasy trip. The last illusion that social change could be brought about through popular pressure on the Democratic Party was shattered beneath the clubs of Daley’s pigs and the manipulations of the Humphrey political machine. 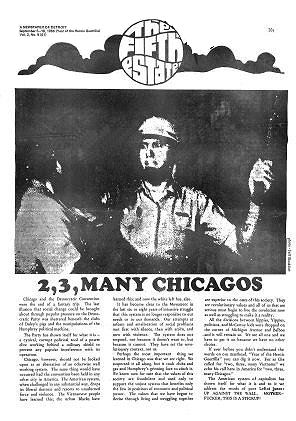 The Party has shown itself for what it is—a cynical, corrupt political tool of a power elite working behind a military shield to prevent any popular interference with its operation.

Chicago, however, should not be looked upon as an aberration of an otherwise well working system. The same thing would have occurred had the convention been held in any other city in America. The American system, when challenged in any substantial way, drops its liberal rhetoric and resorts to unadorned force and violence. The Vietnamese people have learned this; the urban Blacks, have learned this; and now the white left has, also.

It has become clear to the Movement in the last six or eight years of intensive struggle that this system is no longer responsive to our needs or to our demands.; Our attempts at reform and amelioration of social problems met first with silence, then with scorn, and now with violence. The system does not respond, not because it doesn’t want to, but because it cannot. They have set the revolutionary context, not us.

Perhaps the most important thing we learned in Chicago was that we are right. We suspected it all along, but it took clubs and gas and Humphrey’s grinning face to cinch it. We know now for sure that the values of this society are fraudulent and used only to support the unjust system that benefits only the few in positions of economic and political power. The values that we have begun to devise through living and struggling together are superior to the ones of this society. They are revolutionary values and all of us that are serious must begin to live the revolution now as well as struggling to make it a reality.

All the divisions between hippies, Yippies, politicos, and McCarthy kids were dropped on the corner of Michigan Avenue and Balboa and it will remain so. We are all one and we have to get it on because we have no other choice.

The American system of capitalism has shown itself for what it is and to it we address the words of poet LeRoi Jones: “UP AGAINST THE WALL, MOTHERFUCKER, THIS IS A STICKUP!”