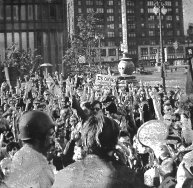 photo by the real Dr. Squat

Indignation over the “Battle of Chicago” created one of the largest demonstrations held in Detroit in quite a while.

Called by the Detroit Coalition, a rally was held in Kennedy Square on August 29. Over 400 people attended even though only several hours’ notice had been given. Many stopped on their way from work to picket.

The picketers carried signs saying, “Down with the Party of Death,” “Dump the Hump,” and “Down with Daley.” The mood was clearly one of disgust with what had happened both on the floor of the convention and in the streets of Chicago.

A rally followed the marching at which Carl Dubrinic, of Students for a Democratic Society (SDS), told of his experiences in the streets of Chicago and exhorted the crowd to keep the movement in the streets.

Larry Dunn, of Youth for Peace Freedom and Justice (YPFJ), also told of his experiences, but warned people not to think that Chicago was a mistake. “If the convention would have been held here in Detroit, the same thing would have occurred,” he said.

James Lafferty, a Detroit attorney, spoke of the need now for supporters of the Democratic Party to begin an “agonizing re-appraisal” of trying to work within the party for change. “I’ve known people who have been trying to reform the Party for the last twenty years and we have seen what their efforts have come to with the events in Chicago,” he said.

After the rally ended a group of about 150 charged over to the Michigan Democratic Party headquarters on Lafayette. The crowd surged up the stairs only to find the office locked. Frustrated in their attempt at confronting party officials, one person slipped a sign under the door which read, “DESTROY THE DEMOCRATIC PARTY,” and the group left.

LONDON (AP) — The U.S. Embassy refused August 31 to accept a pig’s head, delivered on a tray.

It was presented by a group of about 20 demonstrators who said they were Americans protesting the violence surrounding the Democratic National Convention in Chicago.

Guards at the embassy said they would accept a statement of protest but not the pig’s head.

Robert Hurwitt, describing himself as a New York journalist and spokesman for the Committee of Americans Abroad, said the group was expressing shame at the violence in Chicago.