The Battle of Chicago

The Role of the Cops

Editors’ Note: The Fifth Estate contains virtually no news coverage of the Battle of Chicago. For once the overground media did its job and to repeat the horror stories here would only be redundant. Rather, we feel that it is important to put the Chicago events within a perspective and provide an analysis of the events that occurred.

Considered as an isolated event, the Democratic National Convention scene in Chicago is over. Daley’s pigs can now return to more subtle and less publicized modes of suppression. The delegates can resume their positions as cogs in local political machines; the diverse crowds of demonstrators can drift back to their home towns; the residents of Chicago can once again venture into the streets that are now abating to a normal level of brutality; and the Democratic Party can continue to perpetuate its policies of domestic and foreign repression while attempting to reestablish control over the American population for another four years. 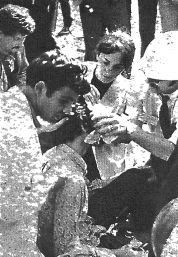 But, considered as a dramatic statement about changing political and social realities in this country today, the convention scene continues to exist and to grow. A lot of apolitical Yippies and very political liberals who were forced into a radical understanding of this country are going to spread that understanding on the local scene. And a lot of people who were shocked and appalled by the shit that was flashed at them on the tube are going to demand answers to some very fundamental questions.

The physical massacre that took place on the streets and the political mockery that took place in the convention hall created a general atmosphere of chaos in Chicago. Yet certain realities that became manifest there can and must be clearly laid out.

The background and dynamics of the Democratic National Convention stand as an inexorable refutation of the myth of democracy in America. The undemocratic essence of the convention is not revealed by the fact that it took place in the midst of a vicious police state or that the convention was “closed”—although these factors are indeed of importance—but rather by the structure of the convention itself.

The delegates, for example, almost never came with a mandate from the people who will be ruled by whoever wins the November election. Many are simply selected by the key figures in state and local power structures. Since these figures are dependent upon the national party structures for political favors, or in fact were able to assume their positions because the actions (support or appointment) of prominent party figures enabled them to do so, they select delegates who support the national party leaders, irrespective of how popular or unpopular such people maybe.

The national party platform committees, also being responsible to the powerful people in the party, turn out programs of support for the party leaders. Thus there is a concise logic to the seemingly irrational bullshit that was dumped on the convention floor. The Democratic jackasses that will now be paraded before the American people-came off the same farm as the cats now ruling the country—despite the growing unpopularity of the current administration.

While the pigs used their brutal tactics in the streets to keep dissenters from expressing themselves, the party bosses used more subtle and manipulative tactics to keep the dissenters inside the convention hall from getting out of line. Both did an incredibly—sloppy job.

The street scene in Chicago was like something out of a Nazi scrapbook. Evidently Daley indoctrinated his pathological police force with the virtues of democratic procedure; everybody got the same treatment, including the Chairman of the New Hampshire delegation and many uninvolved Chicago residents who were on the streets when the shit came down. The atrocity, however, should not obfuscate the intention of the police suppression that occurred: the suppression was manufactured to eliminate dissent from the streets of Chicago.

In return for a convention that would stimulate local business establishments, Daley gave the Democratic Party close to a million dollars and a promise that his city would make the delegates feel safe and welcome—a presumptuous promise that blew up in the mayor’s face.

It was decided by Daley that his personal town would be maintained in a state of “law and order” throughout the duration of the convention. What ensued is probably the most concise demonstration of what the phrase “law and order” means when used by the establishment since the suppression of the black rebellions last summer. The fact that white Americans across the country experienced (or observed other whites experiencing) the treatment that blacks have been subjected to since they were first kidnapped and brought to this land, should afford whites some insight into newly emerging black liberation movements.-

It should be understood that the people who went to Chicago during the convention were not revolutionaries intent on immobilizing the city. A large portion of them were McCarthy supporters who came to make their support for their candidate a visible reality. Many identified with the Youth International Party (Yippies) and came to demonstrate against the inhumanity of the Democratic administration. Among others were New Leftists who came to speak to people about their politics and to make their position on the convention—or electoral politics in general—clear to the other demonstrators.

Perhaps the paradoxically beautiful aspect of the Chicago tragedy was that it forced these different elements to seek unity with one another. All those involved in the Chicago scene were driven into a position of confrontation with (and defense against) the cops. This situation served as a basis of commonality for the diverse groups of people who were around and subsequently made the unification of forces imperative. That the demonstrators in Chicago practiced revolutionary activity in the streets was not due to agitation from extraneous sources, but occurred because the objective conditions—which were those of being confronted by a reactionary and brutal police state—forced such activity.

The Role of the Cops

It was repeatedly stated during the convention period that the behavior of the cops was irrational. I don’t think so. Certainly they were not provoked by the demonstrators. But the power structure does not turn the cops out in the street to do the things that were done for no reason at all. The military repression that came down in Chicago was the strategy of a very uptight Establishment.

Ironically, it appeared that the demonstrators were of no threat whatever: the expected huge numbers didn’t make it and the demonstrations were orderly until the cops repeatedly assaulted them. The threat presented by the demonstrators, however, was nonetheless very real and very fundamental: they did not present a physical threat but rather a political threat.

The Establishment is losing its political legitimacy rapidly and for this reason cannot afford to have the American people in the streets protesting. Given the fact that we will see the same programs for an indefinite period, one can expect to see a growing number of disaffected people. And this disaffection—orderly or disorderly—will bring repression. The very existence of such a phenomenon, at this point in American history presupposes a political threat which is intolerable to the power structure.

It is in this context that the role of the cops becomes relevant. This statement appeared in an editorial in the Detroit Free Press on August 30: “Chicago police are certainly no different from police anywhere.” I tend to agree. Cops play the same repressive role everywhere.

The very existence of a police force as an integral element of the state apparatus indicates certain specific qualities of that state. In particular it implies that the society in which such a manifestation occurs is incapable of satisfying social needs to the extent that its productive potentials would allow and that people will get out in the streets and in some way protest this situation (by rioting, looting, etc.).

Given this society, with its almost-total unresponsiveness to social needs, one can understand the need of the Establishment for a police force to stabilize the situation, to keep the people down who are struggling to get up. And most significantly, as the relationships in this country become more politicized, the role of the pigs will become one of severe political repression.

Perhaps the most politically significant event that came down in Chicago was the support of the demonstrators for a wildcat strike that occurred during the week of the convention.

The issues involved completely transcended bread and butter issues. The workers went on strike to protest working conditions and, more importantly, the ability of retired transit operators to vote on issues other than pension programs. The vote of retired workers is the instrumentality used by the union bureaucracy to suppress the desires of workers who want to do something about their situation.

On Tuesday night of the convention week, fifteen hundred demonstrators who were in the city to protest the policies of the Democratic Party temporarily abdicated their cause and marched on the main bus station in support of the striking workers. The response of the workers was one of tremendous enthusiasm and several hundred of them joined the march and assumed leadership of the march which was transformed into a picket line at the bus terminal.

The scene that resulted was extremely hip. The striking workers and the supporting demonstrators walked side by side while the cops stood around with their-nightsticks in hand and with police wagons near by. No violence occurred but the position of the cops on the side of the bosses and the union bureaucracy was clear by their very presence. In this sense, and because there was real solidarity between the workers and the demonstrators, it was a very educational night.

Looking beyond the events in Chicago, it becomes necessary to understand the situation in America in terms of the November elections. The traditional political system will offer two candidates to the American people: Nixon and Humphrey. One doesn’t know if he should laugh or cry; the ambivalence is understandable.

At a time when there is tremendous discontent in the nation with the present policies of repression practiced by the Democratic Party and outlined by the Republican Party, the American people are being told to fuck off.

They are being presented with the tragedy of choosing between two militaristic administrations who objectively serve the same interests, i.e. the rich and the powerful. We will be forced to accept the perpetuation of war, the existence of extensive poverty, racial oppression, and the further control of our lives by the power structure. The traditional political system leaves us no mode of expression.

A position such as McCarthy’s has been proven to be unrealistic within the framework of traditional politics, a position which needs to be analyzed anyway. The position of withdrawal from Vietnam only becomes politically directive when considered in the context of the structure of international economic relations, a context that the McCarthy campaign was necessarily impervious to. The same interests which caused American troops to intercede in Vietnam constitute the economic reality of a major portion of the world.

The existence of a Vietnamese war is the possibility of a Bolivian war or a Brazilian war or a list of others only defined by the extent to which the corporate structure has interests abroad that it must protect. The problem therefore is as previously stated: America needs a change in institutions; not in personalities.