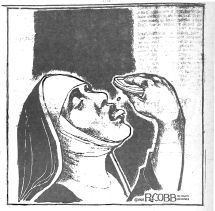 LONDON (LNS)—Millions of Catholics all over the world already staggering under the blow of the Pope’s controversial encyclical on the pill, are in for a new shock.

In a new edict published today by the Vatican press entitled “De Constipatone” the Pope slams down on the use of artificial laxatives to relieve constipation.

“After four years of private agony,” writes the Holy Father, “we feel it our duty to reaffirm the Church’s traditional ruling that constipation is a gift of God as revealed to us by the natural law, not to mention the natural bore.” (Believed by Vatican insiders to be a satirical reference to Cardinal Barrifantoni, one of the curia’s diehard conservatives.)

Speaking of the dangers of laxatives, the Pope condemns them as leading to “moral depravity and general looseness.” But the Holy Father opens the door to users of the rhythm method which involves, abstaining entirely from food for 49 weeks in a year.

The controversial encyclical has already sparked off a major crisis of authority in the Church.

Speaking for British Catholics, Cardinal Heenan said, “Whilst we must obey the Holy Father’s ruling, we must also ignore it. Or that’s the way it had better be, if I’m going to keep my congregation.”

In Ireland, Cardinal O’Comeall ye faithful, 103, commented, “The Holy Father has brought a message of joy to those bound in darkness. Their suffering is not in vain.”