Leverage in the Plants 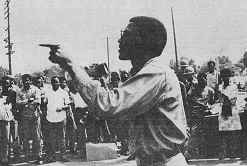 A group of militant black workers have begun to organize at a Detroit auto plant and have thrown both the union and the company into a near panic. It is called the Dodge Revolutionary Union Movement (DRUM) and is located at the Hamtramck Assembly plant, also known as Dodge Main.

DRUM was formed last Spring shortly after young militant blacks had helped lead a wildcat strike over the issues of speed-up of the line and blatant racism in the shop. Another wildcat was initiated by DRUM this Summer and since then the group has been publishing its own newspaper which is widely read by black workers at the plant.

In Detroit, as in most urban centers, the semi-skilled and unskilled occupations in most basic industries are being steadily taken over by blacks. The concerns of the black worker are not simply bread and butter issues as they seek to combat union and management racism.

In many plants where black workers are clearly the majority, and where the local union is controlled by whites, black workers have organized themselves into caucuses which press for demands. A recent example of this is the black bus drivers’ wildcat in Chicago where black workers walked out over demands against the company and the union, shutting down 50% of the operation.

From time to time black caucuses have emerged in UAW locals in Chicago and Detroit, but have found it difficult to remain as permanent groups when faced with the combined opposition of union and management.

DRUM’s development into a radical group was gradual as at first black workers sought to apply influence upon the existing union leadership. Before DRUM there had been a group called Concerned Members for Better Unionism set up by both black and white workers who were tired of the UAW’s unresponsiveness to rank and file demands.

DRUM leader Ron March said, “We had hoped to rectify the injustices peacefully, but repression from the UAW and Chrysler helped transform the CMBU into just a bourgeois social thing. it created divisions which led into opportunism among some of the members. During the regular local union elections in May the organization was used by local leadership to unify young black workers behind sell-out candidates. After that experience a couple of us got together and realized that this was bullshit.

“We decided to form an all-black organization both to give blacks a sense of togetherness and to prevent the kinds of division we had experienced in CMBU. We soon realized we were on to something because the idea of black unity was really hated by the power structure,” said March.

DRUM is now about five months old and is growing rapidly. Its specific short-range goals are “full equity for black workers at all levels of the UAW structure and an end to racism by management.” It is also fighting speed-up and reduction of the cost-of-living allowance.

The long-range goal is to eventually gain control of Local No. 3 leadership. DRUM considers these struggles revolutionary because of their potential to develop black identity and radical consciousness. in addition, gaining control of Local No. 3 would create a confrontation between the people and the power structure. Hamtramck Assembly and the city are seen as the same power. As Ron puts it, “Shutting down the city of Hamtramck is a revolutionary act.”

As a radical group of workers DRUM is a threat to the UAW as well as management. The union has failed for years to serve the interests of the workers at Hamtramck. DRUM is attempting to get black workers to recognize the sell-out nature of union contracts, grievances procedures, meetings and the whole organizational structure for that matter.

The local UAW leadership attempts to play up the initial reaction of white workers calling DRUM reverse racists and harassing them on the job. After the summer wildcat, management fired 7 black workers for their actions in the strike. While the UAW won reestablishment for 5, it refused to fight for the other two who were DRUM leaders, and they were suspended from the plant.

The most recent of DRUM’s activities has been the attempt to elect a trustee to Local No. 3. DRUM saw the election as a chance to place a radical black worker in a position of control over the local’s finances (there are allegations that the local union leadership is involved in pay-offs to the lily-white city administration of Hamtramck). More than that, the elections were a way by which DRUM could organize young black workers to fight for control over the union.

Obviously, the DRUM candidate, Ron March, presented a threat to the local union leadership, and in combination with the Hamtramck police, efforts were made to suppress DRUM.

Everyone except DRUM people was allowed to put up posters and leaflet in the plant. Some of the candidates had people driving workers to the polls at the local and although everyone used No Standing” zones to pick up and drop off people, only the cars with DRUM posters were ticketed. The police would invariably take half an hour to write up the tickets, thus preventing them from taking DRUM supporters to the polls.

In spite of this harassment and the confusion of having 28 candidates in the running, Ron March had 563 votes, 60 more than the runner-up. After the polls closed about 50 of his supporters gathered in a parking lot and later at the local to await the returns.

Police closed in on them at the hall and beat, maced and arrested them. With no candidate winning a majority, March was placed in a run-off with a local leadership-backed candidate on October 3.

Although the arrests were made during the election, all the parking lots in the area were barricaded and the place was swarming with police. March lost the run-off.

People who had voted for him the first time were afraid to vote because of the police riot the week before and because of the mass of police around the plant. DRUM plans to contest the election in the courts.

In discussing why DRUM lost March said, “DRUM has formulated its plans around three factors: black unity, black awareness and black identity. All the young blacks dig the program. It is real to them because of the constant intimidation by management and the pushing around of the workers by the supervisors that goes on all the time. Only the old guys can’t accept the identity part because they don’t want black identity. This system has taught them to identify with whites and integration all their lives. Now they have too big a stake in leaving things alone. So they’ll slip somebody in DRUM a $10 bill and never show their faces at election time,” he continued.

Leverage in the Plants

The core of DRUM’s program is the education of black workers about the structural reasons for oppression and racism in this society. This education will create a situation where blacks can understand their social and economic position; it will generate self-respect. Most of the blacks at Hamtramck are from all over the inner city and when this feeling of self-respect is taken back to the communities it will fundamentally transform that whole area. DRUM organizers believe such a power base will be created at the plant. “By winning the plant we win the community.”

DRUM supports white radical groups on issues that will benefit black liberation. At Hamtramck a small group of young militant white workers has formed a counterpart to DRUM called the Committee for a Real Union (CRU). CRU’s primary aim is to fight against racist attitudes in management which divide the workers. They are also trying to organize white workers around DRUM’s demands concerning job conditions. CRU has existed for about four months and has a “brotherly” but not organizational relationship with DRUM. In the recent trustee election it supported Ron March.

In its leaflet CRU attacks working class racism: “We feel that there are things in this plant and in our local that the black workers and the white workers must fight against. Hamtramck is run by racists! Anyone who thinks this isn’t true should ask themselves how many white people get placed on the line in the body shops.” There is some tension between the groups, for CRU expects to organize both whites and blacks and DRUM is concentrating only upon blacks. Yet, both groups see a need to work together on issues which concern them.

The organizers in DRUM are not romantic, but are conscious of each step they take. Although they are inspired by Malcolm X and Franz Fanon, they organize according to the specific realities of Hamtramck and though they seek revolutionary change they don’t pretend that revolution is around the corner yet. They are hopeful at this point and have not yet lost their cool.