LORPFAT WAS SAYING AS HE BLEW THEIR BRAINS OUT 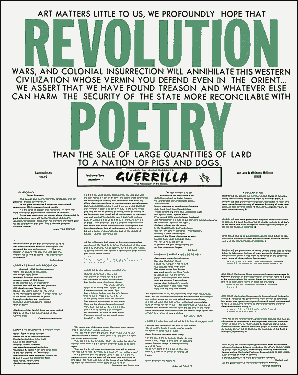 Guerrilla is edited by Allen Van Newkirk and Susan Hodges and published occasionally as a broadside of poetry and revolution. It is reprinted here as a special supplement. The newspaper is distributed free in the immediate community. Mail subscriptions by donation. All corporations, federal and state agencies by minimum $10.00 donation. Free to any human being held against his will in any army or prison. Guerrilla, 1107 W. Warren, Detroit, Michigan 48201.

[Web Archive note: This centerfold insert is a two-sided 15 x 22 inch poster, of which this page can be considered the front side. The other side of the poster is rendered at https://www.fifthestate.org/archive/69-december-26-1968-january-8-1969/poetry/ .]

ART MATTERS LITTLE TO US, WE PROFOUNDLY HOPE THAT

WARS AND COLONIAL INSURRECTION WILL ANNIHILATE THIS WESTERN CIVILIZATION WHOSE VERMIN YOU DEFEND EVEN IN THE ORIENT... WE ASSERT THAT WE HAVE FOUND TREASON AND WHATEVER ELSE CAN HARM THE SECURITY OF THE STATE MORE RECONCILABLE WITH

THAN THE SALE OF LARGE QUANTITIES OF LARD TO A NATION OF PIGS AND DOGS.

“The banner goes out to the filthy landscape, and our gibberish drowns out the drum,

“To the lands of pepper and monsoon!—to serve the most monstrous exploitations, industrial or military.

“To be seen again here, no matter where. Conscripted to good intentions, ours will be the ferocious philosophy; ignorants for science, debauchers for comfort; the death gasp for the population that goes. This is the real progress. Forward, march!”

We must make an art that will function so as to call down the actual wrath of world spirit. We are witch doctors and assassins...This is a theater of assault. The play that will split the heavens for us will be called “The Destruction of America.”

beats the psyche in this poem.

whipped & coiled about her choked

in the swollen lips of imagination.

Another lady will ask the real questions.

Will plead her case. Squat. Piss.

in the thoroughly abstract. Turned inside out

is the world. Surrounded by poets.

to invent what hostages she needed.

Abolition of the family! Even the most radical

flare up at this infamous proposal of the

staked out in its own compromise.

Psyche burned eros in her light.

& the rest walked. In Democracy

& lost. Except the answered. Beat

I will kill by word and by deed and by my vote and with my own hand, if I am at all able, whosoever shall overthrow the democracy at Athens, and whosoever shall hold any office after the overthrow of the democracy and whosoever shall help establish a tyrant; and if someone else shall kill one of these, I shall consider him holy in the eyes of the gods and the divine powers, as having killed an enemy of the Ahteriians; and I shall sell all the property of the dead man and give half to the killer and I shall hold nothing back. If someone dies while killing or trying to kill one of these, I will treat him and his children with the kindness which was shown Harmodius and Aristogeiton and their descendants. And all oaths sworn at Athens or in the army camp or anywhere else against the people of Athens, I abolish and renounce.

All the Athenians shall swear to this over unblemished sacrifices in the legal form before the festival of Dionysius; and they shall pray for prosperity for the one who keeps it, but for the one who breaks it destruction both for him and for his whole family.

(From an Athenian law of 410 B.C., reenacting a law of Solon, quoted by Anocides in his defense speech, On the Mysteries. Translated by Sam Abrams and K.J. Maidment.)

Metal birds burned in the wind.

their bodies were. Hot flying things.

stood on its dumb feet. Raised its arms

& walked through out faces. Spit

their smoking bodies into the soft desires

history wore. Flags moving in & out

of the phony revolutions she declared.

This poem is surrounded by real poets.

They are the ghosts the words suggest.

They have warned us. Any more tricks

with colors & vowels & our tongues

will disappear. In pools of their blood.

The poem cut off its leg. Layed down.

My young men shall never work. Men who work cannot dream, and wisdom comes in dreams.

You ask me to plow the ground. Shall I take a knife and tear my mother’s breast? Then when I die she will not take me to her bosom to rest.

You ask me to dig for stone. Shall I dig under her skin for bones? Then when I die I cannot enter her body to be born again.

You ask me to cut grass and make hay and sell it, and be rich like white men. But how dare I cut off my mother’s hair?

It is a bad law and my people cannot obey it. I want my people to stay with me here. All the dead men will come to life again. We must wait here in the house of our fathers and be ready to meet them in the body of our mother.

The fact is there is no art

no vision in the west there is no

definition cannot be made “reason”

for unalterable and predictable action.

how it operated in antediluvian Florence

men there must have thought they

“made something more than protective walls

not against water, against men—

(The central difference between Medieval

isn’t that the “spirit of the age?”

Ghiberti’s doors are the doors

to the biggest bank, and bank doors

may be “the gate to paradise”. The Baptistry

is clearly a bank (those doors

would fit the Chase Manhattan as well)

tourists have never mistaken that—

the iron grating was put up

to protect the gold being rubbed off

by their inquisitive fingers.

I stuck my tongue in her mouth.

Our mouths filled with snow.

The ocean in our lips. & love

was intelligent to us. Grew fangs

Down wind the poets held hands

with the widows. Fake widows

turned their husbands to words.

Smelled them if they bled. Red.

Art matters little to us, we profoundly hope that revolutions, wars, and the colonial insurrections will annihilate this Western civilization whose vermin you defend even in the Orient, and we call upon this destruction as the least inacceptable state of things for the mind...We assert that we have found treason and whatever else can harm the security of the State more reconcilable with poetry than the sale of ‘large quantities of lard’ to a nation of pigs and dogs...

LORPFAT WAS SAYING AS HE BLEW THEIR BRAINS OUT

Feelings have nothing to do with it. Are islands.

Let the sound lift its burning thighs. In love

there is only image in love with an opposite

any of its faces.

Some hot death in the pipes of this city.

Beat it. Listen to its peculiar mating call.

WHEREAS the government of the United States of America forces men to carry weapons & learn to kill with them, &

WHEREAS that government imprisons the bodies of men who resist the enforced carrying of weapons & killing of other men, acting in fact as hired killers, & thus doing ungodly injury to their immortal souls, &

WHEREAS that same government employs those hired killers to destroy the lands & properties of smaller nations in all parts of the world that is by no legal or moral right the preserve of the United States of America, &

WHEREAS that same government uses its hired killers to destroy the economies of other nations in order to enrich the economy of the United States of America, &

WHEREAS the government of those United States uses its hired killers to take away the lives of men, women & children in any nation of the world it may want to terrorize at any given moment, some of those nations having been:

WHEREAS the United States government openly encourages & supports dictators in their suppression of human rights & dignity in the nations where the United States has not yet or recently sent its armed killers, some of these nations being:

WHEREAS the United States government declares that human life outside its boundaries is less important than the American notion of economy, so that Indians & Nigerians starve while American farmers destroy their own crops, & so that Vietnamese babies are burned to death by the machines of the Boeing Aircraft Corporation, &

WHEREAS the United States government seeks by unilateral actions of violence & terror to destroy the efforts toward peace & world order & justice, those efforts made by international bodies such as the United Nations, & agreements to seek peace, such as those of 1954 in Geneva,

I DO SOLEMNLY, & from this moment forward,

on the government of the United States of America.