Reprint from Vietnam Report Vol. 1, No. 1, the official newsletter of the Detroit Committee to End the War in Vietnam (DCEWV), April 1966 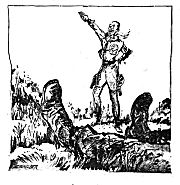 All the way with LBJ—and Nguyen Cao Ky! (reprinted from Weekly People)

Using the occasion of the Tom Hayden speech during the International Days of Protest. James T. Lafferty, Chairman of the Citizens for Peace in Vietnam, announced his candidacy for the 17th District U.S. Congressional seat presently held by Martha Griffiths.

In making the announcement, Mr. Lafferty stated: “I am going to take the liberty of making a personal announcement Which I think appropriate to make tonight for two reasons. First, your presence here indicates that you are actually concerned with the cause of peace, and second, your picketing earlier of the Jefferson-Jackson Day Dinner shows that you realize that the Democratic party has not shared your active concern for peace in the world.

Because I feel strongly that our nation must be turned away from war and towards peace; because I believe our concept of our nation’s proper roles in international affairs must be altered; because I feel that the “fourth branch” of the government—the People—must be expanded; because I believe that the present Congresswoman from my district hinders rather than advances these goals; and because I cannot in good conscience “leave the other fellow” the job of opposing her, I will be a candidate for the U.S. Congress in the Democratic primary in the 17th District.

I am embarking on this campaign because such action seems to afford the best arena in the next few months in which to wage the war on war by stimulating discussion and educating people on the peaceful alternatives to the war in Vietnam and on related domestic issues.”

Mr. Lafferty, an attorney, is the Executive Secretary of the National Lawyers Guild and a part-time instructor in the Wayne State University Law School. He is 28 years old, married and has one daughter.

Nominating petitions for Lafferty may be obtained at the IAM office, 7639 12th Street, 872–4683. As more details are received by us we will inform interested people how they may participate in the campaign. Those in the 17th district should watch for special mailing on that matter.

Sung to the tune of “The Green Beret.”

Soldiers fighting in the East

Fearless men against the Slavic beast.

Men who fight for Farben and Krupp,

The brave men of the SS troop.

Double S upon their chest.

These are men—the Fuhrer’s best.

One hundred men may try to join the group

But only three make the SS troop.

Trained to live for the Fuhrer’s goals

Trained in dealing with Jews and Poles.

Courage take from the SS Troop.

Double S upon their chest.

These are men—the Fuhrer’s best.

One hundred men try to join the group,

But only three make the SS troop

Back at home a Hausfrau waits.

Her SS-man has met his fate.

He has died in Deutschland’s quest

Leaving her this last request:

“Put the double S on my son’s chest.

Make him one of the Fuhrer’s best.

He’ll be the man for Einsatz group.

Have him join the SS troop.