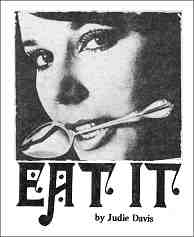 As I write this time I’m recovering from a tonsillectomy and therefore haven’t done much cooking or eating.

Vernors ginger ale seems to have healing powers that only Detroiters are aware of. Vernors and milk is also my number one remedy for a morning-after thirst.

I’ve also had this yen for Chinese food for the past three days and can’t wait to swallow a big bite of chow mein or egg roll or sweet and sour pork.

Bill Kahler came by Alvin’s on Sunday a few weeks ago and played his guitar. Bill has been around Detroit for quite a few years now, playing in obscure places like Keego Harbor and bars in the suburbs. It’s a little hard to describe what Bill plays because he plays everything and plays it very well. Sort of blues, folk, rock. He does an outasight version of “Searchin’” and the Beatles’ “Tomorrow Never Knows.”

I’ve been part of a small cult who has followed Bill around and I want other people to enjoy him as I do. In my opinion, Kahler is probably the best guitarist around Detroit.

Bill will be at my birthday party Sunday, January 12, at Alvin’s Delicatessen (Cass at the Expressway). Just about all of my best friends were born in January, in fact most of them between the 10th and the 15th.

All of us and anyone else whose birthday is in January will be celebrating on Sunday, the 12th at Alvin’s between 11 and 5. Come by, hear Bill Kahler and give me a birthday kiss.