It was an unheard-of event. For the first time a performer picketing the place he was supposed to play because he wanted to perform there. 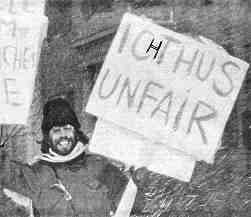 On Saturday evening Dec. 28, Ted Lucas put up a one-man picket line outside of the Church of Christ (located next to the Playboy Club); within the Church was the Ichthus Coffee House. Lucas was booked to play a concert there but was canceled out with less than 24 hours notice because of an alleged lack of funds. The booking agent for the Ichthus claimed that because the coffee house had been asked to leave their former home, the Old Mariners Church, they couldn’t afford a higher priced act because their new home held one third the capacity.

“While I was completely sympathetic with the plight” Lucas said, “I felt they were obligated to carry out their commitment to me because that move had been accomplished 3 weeks previous to the date I was supposed to play and they waited till the last minute to tell me. I attempted to reason with them, explaining that I am a full-time musician whose livelihood depends on my concert work. All to little avail for the manager of the club, Fred Brunson remained completely unwilling to reach an amicable compromise to the problem he himself had created by his oversight.”

“So I did what any red-blooded member of the underground would do, I threw up a picket line with the help of my sympathetic friends.”

Picket signs were made reading “Ichthus Unfair,” “Uncle Tom Preaches Here,” “Scab Shop” and the group began marching in front of the church at 7:30. Within 15 minutes two to three dozen people were gathered on the sidewalk in the snowing, freezing weather. The crowd, which included bystanders, members of the coffee house, and members of’-the clergy as well as the picket liners, engaged in a heated debate as to the merits of Lucas’ case.

The discussion was also joined by performers Christopher and Sara, a musically beautiful duo who had been booked for that evening completely unaware of the changes going down. They immediately responded by refusing to cross a picket line set up by a fellow musician.

This unusual and beautiful display of solidarity strengthened Lucas’ case to members of the organization who had been unaware of the changes going down. Further strengthening Lucas’ case was the presence of guitarist Rick Ruskin on the line. Rick had performed at Ichthus a month earlier. Also present was photographer Evan Soldinger and members of the underground and above ground press.

The discussion ran hot and heavy in the below freezing temperatures on Jefferson Avenue, and members of the organization withdrew to caucus amongst themselves. Lucas remained outside awaiting representatives from the musicians union.

Within a short length of time a decision was reached that Lucas be allowed to perform and be paid his fee (he had been told not to show up at the club at all). Lucas laid down his- signs and entered along with his usual array of instruments.

The crowd’s mood was mixed but within a few minutes Lucas had them firmly on his side and in spite of all the changes he had gone through, gave an excellent performance.

After the show Lucas commented on the affair. “They wanted to pay me not to play because they were uptight, but I refused to be bought off. One of my life’s greatest pleasures is performing for audiences and I wasn’t going to be denied that because of a few people’s hangups.”

Other than that the evening was summed up by Rick Ruskin, “This is the first time I’ve ever been on a picket line that won.”