Selfridge Air Force Base is an idyllic installation on the beautiful shores of Lake St. Clair about twenty miles north of Detroit. It houses a SAC installation, a fighter-wing, and miscellaneous other units. 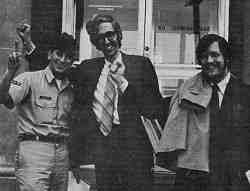 Anti-war activity on the part of servicemen there has been sparse. All airmen enlist, and so the normal unrest to be found at a base with a large number of inductees is absent. However, recently, even this island of calm has been hit with the reality of the opposition to the war and American imperialism.

The Ally, an anti-war GI newspaper published in Berkeley, California, started to appear around the base. One of those airmen who read it and found it exciting was Theodore Goldflies.

He began to feel that he would like others to read the paper, and so obtained copies in quantity, and made them available to interested GIs.

He fell into the spider’s web on April 22.

On that afternoon, as he was leaving work to go to a special training class, he ran into Lieutenant Robert Donovan, an officer who considers it part of his responsibility to dictate the moral and political views of his men. Goldflies was carrying some copies of The Ally.

“What have you got there?”

“Copies of The Ally. It’s an underground newspaper.”

“No, it may be against regulations to give you one, but if you would like one, you may take one from the pile.”

Lieutenant Donovan took one. Within thirty minutes, he and another officer were in the office of Major Fred Smith, the commander of the First Civil Engineering Squadron to which all concerned were assigned.

An inquiry at Goldflies’ shop indicated he was at a special class. An inquiry at the special class indicated the class was over and Goldflies had been dismissed at about 3:45 p.m. No further attempt was made to contact this young political heretic until he was called to Major Smith’s office on April 28.

“I propose to impose punishment on you under Article 15 of the Uniform Code of Military Justice. You are accused of being away from your duty station without. authority from 3:45 to 4:30 p.m. on April 22, 1969. You have the right to either accept this administrative punishment, or refuse punishment and be tried by Court Martial.”

“I want to talk to my lawyer,” said Goldflies.

Goldflies contacted Attorney Marc Stickgold, a radical attorney in Detroit who is President of the Detroit Chapter of the National Lawyers Guild. After a conference with him and Attorney Marc Kadish, Executive Secretary of the Detroit Guild chapter, the decision was made to refuse the administrative punishment and force a Court Martial.

“We were convinced he was innocent,” said Stickgold, “as well as being convinced that he was being prosecuted solely for his political and free speech activities. We wanted this revealed in a public hearing.”

On May 20, the Court Martial was held. Although it was only a summary court martial (the lowest type), Goldflies still faced thirty days in the stockade, loss of pay and rank, or other punishments.

In an attempt to raise the political question directly, the attorneys filed a motion to dismiss the prosecution on the grounds that it was political harassment. All the officers concerned, from Major Smith on down, were summoned to testify at the court martial.

The testimony revealed that neither Lieutenant Donovan nor Major Smith thought the contents of the paper were “fit for military eyes.” They had wanted to prosecute Goldflies directly for having the newspaper.

The Judge Advocate General (legal officer) however, had told them that there was nothing illegal about it; that they would have to get him on something else. And so behold!

They discovered that Goldflies had missed 45 minutes of work, and prosecuted him under Article 86 of the Uniform Code of Military Justice for failing to repair to his appointed place of duty without authority.

The court martial hearing officer, Captain May, reserved decision on the political motion and proceeded to hear evidence on the alleged absence from work.

Testimony of both the government’s witnesses and the defense witnesses definitely established that it was and had been normal custom and practice for airmen going to late afternoon classes not to return to work until the next morning.

There was further evidence in Goldflies’ case, that the Airman in Charge of his shop had known that Goldflies intended to return the next morning, and had said “O.K.” when told this. Finally, the instructor of the special class had told the class upon dismissing it to “make it for the day,” which is commonly understood to mean “dismissed for the day.”

The weak and trumped up nature of the charges became clear. There was even testimony that the JAG office had once told Major Smith’s office to tear up the charges against Goldflies because they wouldn’t hold water. But the Major pressed on.

Captain May found Airman Goldflies not guilty. The attempt at harassment failed. The case had become an important topic of conversation on the base and many airmen were watching the outcome.

This victory will hopefully give some greater freedom to airmen at Selfridge who want to read about the war in papers other than the Air Force Times. And more important, it opens up opportunities for organizing some of the GIs at Selfridge into understanding the nature of the military and the war, and beginning to resist it.

Stickgold and Kadish, who are the Midwest attorneys for the New York Draft and Military Law Panel, sponsored by the Guild and the National Emergency Civil Liberties Committee, feel the victory is important beyond the specific case.

“Servicemen must know that their isolation is not total,” said Kadish.

“I think the fact that the political implications of the case were made clear both to the brass and the GIs will be crucial to the success of future organizing efforts. It was not just a minor AWOL charge that was beaten; but a political charge, and everyone knows it,” said Stickgold.

This first court martial at Selfridge in many months (the last one was of an airman who made a pass at a WAF officer—he got thirty days) has triggered what it is hoped will be continued organizing activity on the base.