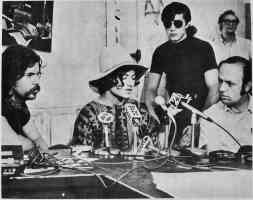 Bill Keast sent Cheryl McCall a telegram at 2:30 am July 11 which read:

The issue planned for July 11th was perhaps the most ambitious single issue the South End staff had ever conceived. What was normally an eight-page paper liberally peppered with advertising, announcements, and classifieds was to be a twenty-four page special, overflowing with copy.

The theme was an exploration of the American youth cultural revolution. Everything from communal living to rock ‘n’ roll was dealt with; the content: as eclectic and vital as the lifestyle-it represents.

It had weird cartoons, White Panthers, and...a lot of “fucks” in it. It also had statements and analyses that in retrospect will no doubt prove to have been profound. The only thing it didn’t have was the University’s rubber stamp.

As soon as Cheryl received the telegram plans were made to insure that the paper would be printed in spite of the fact that university funds and materials were no longer available.

Friday morning, a press conference was held in the South End offices beginning a barrage of sensational coverage by the straight media that made charges of sensationalism leveled at the South End ludicrous in their light. Reporters from the Detroit News and Free Press all but ignored the issue involved as it was explained and leapt at the chance to report that McCall invited Keast to “sit down and smoke some dope with us.”

Former South End editor Art Johnston, now living in California and writing for the Berkeley Barb, was described as a “hippy motorcyclist” who threatened an “invasion of weirdos, dope-fiends, acid-heads and motorcycle freaks.”

One reporter claimed that McCall’s profanity turned the air blue and roasted the ears of the television camera sound-man. As one who was there, I can reliably report that the air was not blue at all, but rather the typical Detroit acrid smog. The sound-man’s ears were no redder than his neck.

Now that the story of what was going down in ol’ Keast-town had been brought to the doorstep of every freedom-loving (i.e., News-subscribing) home in Detroit, the city waited with its fat ass on the edge of its chair to see what would happen next...

Would the South End get printed (doity woids an’ all)?! Would the glorious forces of righteousness triumph over the devil incarnate in five-foot Cheryl McCall?!

Not exactly. Far from getting their comeuppance, the staff of the South End saw their pride and joy get to the presses, through the presses, out to the street and into the hands of the people.

The weekend of July 12–13, feverish activity marked the search for a way to get the paper laid out and printed. The nucleus of that effort was a folder of rough copy which had been snatched from its intended destruction at the hands of Wayne’s brain police. All else remained to be done.

A coalition between the Fifth Estate, the Ann Arbor Argus, and the South End was formed with innumerable neighborhood people pitching in with advice, equipment, and encouragement through the long days and nights. Finally, the printers (who also prints this paper) was persuaded to print 30,000 copies by Monday.

Monday morning another press conference was held. By the time reporters had filled the cramped office on West Warren, the first copies off the presses were being exultantly displayed.

In a sense, the existence of the special issue was like the last “oh, yeah!” in a kids’ argument, but it had a much greater significance as a collection of words and thoughts and as a testament to the paper’s ability to function independently.

The cost of the paper was set at 15 cents, and people proved to be more than willing to pay the price to see what all the fuss was about. Businessmen drove by downtown street corners in their deuce-and-a-quarters and left vendors with quarters, fifty-cent pieces, and even dollars.

Local degenerates had their first square meals in a week from the money they made selling the paper.

As Fred Frank, managing editor of the South End, said, “You can make more money selling the paper than you can writing for it.”

As of this date, The South End has once again been re-instated as the official University newspaper, within the guidelines Bungle-O Bill and his friends have set up to insure that the paper is “objective,” “non-sensational” etc.

Contrary to whatever anybody in Detroit may have been led to believe by the News-Free Press’ coverage, the South End will proceed as usual; unpredictable, dangerous (to the pigs and oppressors) and free to speak the truth.