End the War in Vietnam
Back page poster

End the War in Vietnam

End the War in Vietnam 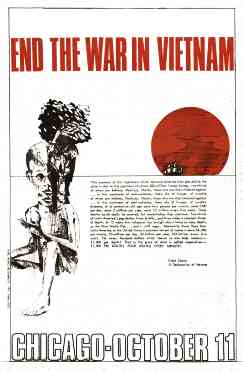 “The summary of this nightmare which torments America from one end to the other is that in this continent of almost 200 million human beings, two-thirds of whom are Indians, Mestizos, blacks, those who are discriminated against in this continent of semi-colonies, there die of hunger, of curable diseases, or of premature old age some four persons per minute, some 5,500 per day, some 2 million per year, some 10 million every five years. These deaths could easily be averted, but nevertheless they continue. Two-thirds of Latin America’s population lives briefly, and lives under a constant threat of death. In 15 years this holocaust has brought about twice as many deaths as the First World War and it still rages. Meanwhile there flows from Latin America to the United States a constant torrent of money—some $4,000 per minute, $5 million per day, $2 billion per year, $10 billion every five years. For every thousand dollars which leaves us one body remains—$1,000 per death! That is the price of what is called imperialism—$1,000 PER DEATH! FOUR DEATHS EVERY MINUTE!”