SDS Battles Police
Which is worse in Detroit? Jay-walking or carrying a red flag? 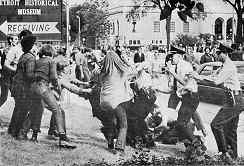 Which is worse in Detroit? Jay-walking or carrying a red flag? I suppose it depends on where you are coming from, but put together 60 persons jay-walking after a rally, led by a red-flag-carrying revolutionary, and you can expect what did happen on Saturday, September 27.

Motor City SDS had called a rally on the front steps of the Main Library on Woodward and Kirby to demand an end to Wayne University’s racist urban renewal program and its planned entry into the war research field.

The rally proceeded smoothly on a balmy Indian Summer afternoon with the speakers being only occasionally interrupted with cries of “Right on” from the audience and a few catcalls from a rag-tag band of about 8 counter-demonstrators.

The speakers hit hard on the effect of the displacement of black families from the WSU area and the University’s role in support of world imperialism. Detroit police were in evidence, but not to an overwhelming extent. They simply circled the block incessantly.

The last speaker announced that any of the 150 assembled that wanted to participate in a march to sites at Wayne that presented the injustices described should assemble and begin to walk. About 60 persons began walking north on Woodward along the sidewalk led by a guy carrying a red flag.

The march suddenly veered directly into Woodward where it was cut off by a single Tactical Mobile Unit car. The police inside jumped from the vehicle and attempted to grab the flag bearer.

The guy with the flag began running down Kirby to elude his pursuers and was followed by the entire line of marchers. About six carloads of pigs were on the scene and leaped from their cars to chase the crowd having no idea what offense had been committed, but if you see a lot of demonstrators running, they must have done something.

Here the normal scenario ends. Instead of marchers getting the shit beat out of them, they turned, stood their ground and fought the police. The huge melee that followed involved about ten pigs and fifty marchers. Several pigs bit the dust at the hands of the people who were slugging, kicking and doing all they could to kick some blue ass! When one cop grabbed a girl, 8 others of her sisters were on the dude in a second, wrestling him to the ground and freeing their friend.

Then the tide of battle turned.

Reinforcements arrived in the form of about 20 TMU cars. They were met with a heavy barrage of rocks and other street litter, but the pigs were still able to get into the thick of things.

At about that moment, the street fighters decided to call it a day and beat a hasty retreat along Cass Avenue.

One unfortunate brother, John Pilkington, was caught in the driveway of the Detroit Orthopedic Hospital and was beaten with clubs by six pigs.

The police claim one of their troops suffered a broken wrist with four others sustaining cuts and bruises. Pilkington was the only casualty on the marcher’s side.

Of all those in the area, police were only able to apprehend eight. They were charged with assault and battery. They are Pilkington, Lahoma Marcom, Karen Latimer, Tom Luazek, Morris Older, Dave Chase, Steve Fitch and John Jacobs.

Jacobs was also charged with anarchy, under a little used 1935 Michigan statute that prohibits the displaying of a red flag.

The following morning Recorder’s Court Judge Henry Heading dropped the charge against Jacobs, but remanded all of them to the Wayne County jail in lieu of $500 and $1,000 bonds. The charges were changed to resisting and obstructing an officer and injuring a police officer; more serious than the original assault charges.

Judge Heading went on some lame thing about doing things a reasonable way, but his pleas fell on deaf ears. He even offered to drop charges against two of the women if they would agree to go back to their parents.

When they refused they were led away in handcuffs.