Fifth Estate Tool of the Year
The Sledge-Hammer 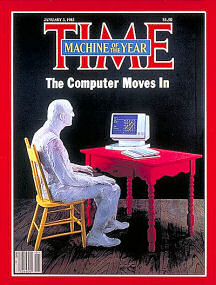 It had to happen eventually, and it did. That repository of pre-masticated mediocrity, that script for dullards, Time magazine, declared its “Man-of-the-Year” a machine-of-the-year, the computer. The magazine gave a lavish spread to this loathsome invasion, joining in the corporate chorus with its declaration, “A new world beckons.”

In the wise-cracking, cynical style of the hawker and the confidence man, an editor wrote in the introduction, “...I want to sell you one of these beauties, ‘cause you need it and ‘cause you want it, no matter what you say. Deep in your all-American heart (you are American, aren’t you, pal?), you crave this little honey, which will count for you and store for you and talk for you, and one day it might even kiss for you (no offense, miss).“A text then follows which demonstrates how the computer will store more and more information, rid the world of disease, and “save you time,” and it presents a rogues’ gallery of the entrepreneurial creeps and the technocratic morons who are making it all come true behind our backs.

Yes, a spectre is haunting this decaying, accelerated world--the spectre of computerization. All the powers of the technological order have entered into a holy alliance to call this spectre into being: General and politician, Andropov and Reagan, California leftists and West German police agents. A Bell Telephone advertisement announces, “The Information Age is calling...we’re looking forward to the future. Ours and yours.”

It’s a gold rush and a land rush and more: we are on a threshold reminiscent of the hucksterism of the post-World War II period, when scientists and engineers heralded the brave new world of unlimited affluence, nuclearized houses, artificial foods, and a freeze-dried antiseptic life for all. That world turned a little sour, with chemical dumps leeching into the basement and near-nuclear wars almost started by flocks of geese on radar screens. But somehow they grind and wind the machine up again, and newer, greater, more terrifying promises are revealed. 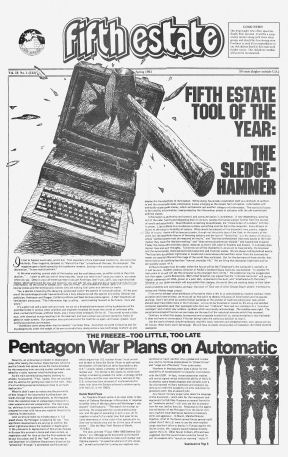 “Inventions come along when they’re needed,” mumbles Time. And when its world is fissuring and listing dangerously under the weight of its own contradictions, along comes a new technology to shore up and deepen the foundations of domination. While energy has already established itself as a linchpin of authority and the corporate state, information is now emerging as the newest form of capital. Information will eventually supersede money, which will become just another category of information. The world will come to be ruled by information, manipulated by the information priests in collusion with the old moneyed and political classes.

Information is authority and control, and computerization is its skeleton. A new dependency, growing out of the older forms and deepening them in its turn, isolates the human subject further from the sources of revolt and autonomy. Quantification is reaching its apotheosis, the “romanticism of numbers” is firmly in power. Like tribute to a murderous cyclops, everything must be fed to the computer. Everything is reduced to the binary stupidity of ciphers. What cannot be reduced will be discarded: love, poetry, tragedy. But of course, there will be love and poetry, though not the subtle love of the flesh, or the poetry of the wind, but the aesthetic beauty of bombing patterns and the love of “direct hits,” and the poetry of circuitry, where “performance must be measured by results,” and “business professionals have easy access to the information they need for decision-making,” and “data communications-can expand,” and expand and expand.) Today the computer promises utopia, reassures us that it will usher in freedom and dreams. It is already shaping our lives and our thoughts. Tomorrow we will be chained to it, as we are to mass society, the television and the automobile, chemicalized food production and chemical wastes. We are always rushing behind events. The futuristic dystopian nightmares in novels and movies always derived their terror from the contrasts between our sensibilities and the image of the world they portrayed. But for the denizens of those worlds, that terror had to be nothing less than “normal, everyday life.” We are living that dystopian nightmare and we are scarcely aware of it.

Difficult choices must be made: either the future will be Bell Telephone’s, the computer’s, capital’s, or it will be ours. Robert Jastrow, Director of NASA’s Goddard Space Institute, has declared: “In another fifteen years or so we will see the computer as the emergent form of life.” His prediction may be exaggerated, but then again, Lewis Branscomb, IBM’s Chief Scientist, has argued that the “ultimate computer” will be biological, patterned on DNA, grown in a petri dish, implanted in the skull, and “interfaced with the brain.” Whether or not these sorcerers will accomplish their designs, the world they are creating today in their laboratories will be unfit for human life, for love and for freedom--words which do not compute. (Hence it came as no surprise that rather than showing real human beings at the computer terminals--tired secretaries with vision problems and sore backs, perhaps--the cover of Time was of artist George Segal’s plaster mannequins, artless and lifeless stage props.)

If we are to salvage what semblance of humanity there is left in us unmutilated by modern warfare; mechanization and mass society, we must call up that spirit to destroy this sway of information and its pseudo-promise. Don’t be lured by science fiction paradises or the wonder of machines taking over tasks which should never have been done in the first place. Let us not be thwarted or cowed by the smug and satisfied computer specialists and their apologists who liken our “irrational” fears and our resistance to a “primitive nostalgia” and a latter-day luddism--epithets which we proudly acknowledge. The luddites were right. The social and ecological horrors we see today are the result of the industrial promise which they opposed.

Contrary to what the bosses, bureaucrats and corporate hustlers tell us, computerization is not inevitable. It does not have to come about if human beings make the conscious decision to stop it.

Use the tools at hand, simple hand tools, neolithic tools, hammers and sledgehammers, even stones will do. Of course, these tools won’t be enough. We will have to create communities of resistance--but there must be resistance.