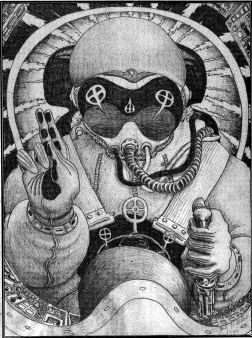 The High Priest of Technology still holds the high cards of death, but throughout the world mass opposition to his plans are taking place. Easter week-end in Europe saw at least half a million people in Scotland, England, the Netherlands and W. Germany carry off demonstrations, die-ins and blockades. Hundreds of other small actions like trespassing in the Upper Peninsula of Michigan by churchpeople on an Air Force base go largely unreported, but are examples of a wave of resistance to the annihilation which waits in the wings.

Several groups have issued calls in advance of the October 22–23 international days of protest planned by the European peace movement, to make June 20th a day of demonstrations against first-strike and Euromissiles. The original call came from the Livermore Action Group (3126 Shattuck Ave., Berkeley CA 94703, (415) 644–3031) which plans a third blockade of the Lawrence Livermore Laboratory in California where 1,300 were arrested last June. They will try to shut down the nuclear weapons lab once again. In the Midwest, the Disarm Now Action Group (407 S. Dearborn, Rm. 370, Chicago IL 60605, 312/427-2533) has proposed coordinated actions at as many Euromissile and other first-strike production sites in the Midwest as possible on that date. They have an extensive list of targets available with one undoubtedly in your area.

American resistance coordinated with deployment site demonstrations in Europe could be what overcomes the still lethargic U.S. response to nuclear madness. None of the groups mentioned above have yet been able to make the full connections between nuclearism and the nature of the political state, technology, etc. Many of them propose odious slogans about the government providing jobs and the like. As those who oppose the state in its entirety we are once again left with the choice of joining the actions of reformists who still hold onto the delusion that the state can be persuaded, or independent actions which, though small, would reflect libertarian principles. To us, small actions minus political, religious or trade union mystifications would be a good beginning to an anti-nuclear movement which refused to surrender to the reigning reality. Any ideas? If so, write us and we’ll try to publicize them.