Detroit Tries to Support Viet War
...as 500 March in Parade

Their bust of General MacArthur which caused so much trouble in the St. Patrick’s Day Parade was there.

The gentlemen of Grand Circus Park were not impressed. But then there wasn’t much to be impressed by.

Less than 500 people marched down Woodward Avenue in the great Flag Day parade on June 14. The March was called by a resolution of the Michigan Senate to honor the flag and “Support Our Boys in Vietnam.”

Consisting primarily of has-been politicians and has-been veterans the parade gave a new-found legitimacy to a group which calls itself “Breakthrough” and its campus likeness, so-called “Counterthrust”. 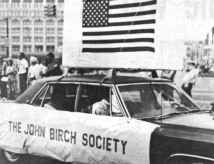 The John Birch Society, was represented by a 1967 four door, air-conditioned Cadillac Fleetwood.

Still fighting wars past, the veterans contingent contained one group which carried a sign stretching half the width of Woodward which read, “WE’RE POLISH AND WE SUPPORT OUR BOYS IN VIETNAM.” A spectator was heard to call out “Polish Power” as the group passed. Like the march itself, the remark attracted little attention.

The aristocrats of the far right, the John Birch Society, was represented by a 1967 four door, air-conditioned Cadillac Fleetwood. Apparently members of the Society did not feel the American flag warranted getting out of the car onto the pavement in the 90 degree heat.

Investigation disclosed that the car is owned by the GEM Distributing Company, 17517 W. Eight Mile Road in Detroit. It was driven by a partner in the company, which distributes floor polishers, Mr. Dennis Dukes. Another partner in the concern, Mr. Woodruff, expressed surprise that the company car had been used and claimed no knowledge of it.

As would be expected, the Breakthrough and Counterthrust groups were the stars of the evening as well as the largest single contingent.

Their bust of General MacArthur which caused so much trouble in the St. Patrick’s Day Parade was there. So was a float carrying a Soviet flag draped coffin with a live dummy dressed as Uncle Sam plunging a bayonet repeatedly into the coffin. This was presumably consistent with Breakthrough’s policy of “beating dead horses”. What, one wondered, is the symbolism of bayoneting coffins?

The Soviet flag was then removed from the coffin and burned in the midst of the ceremony which followed the parade. Ex-Governor Swainson, who was speaking at the time responded by saying, “I’m sure no one could disagree with that demonstration going on over there.” He then remained respectfully silent while the flag burned amidst cries of “Victory! Victory!”

State Senator Brown soberly gave special thanks to Breakthrough by name for their participation.

Ex-Governor Williams led everyone in the pledge of allegiance to the flag.

Some Admirals and Generals and the mother of a soldier in Vietnam were introduced.

Big bunches of left over American flags were passed out to anyone who would take them.

And then they all went home.