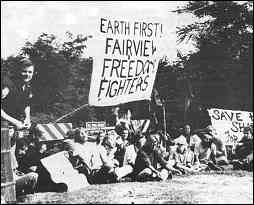 Beginning on June 20th, a determined group of Earth First!ers (EF!), Industrial Workers of the World (IWW), and anarchists, maintained a blockade at the site of the Fairview timber sale area in southern Illinois’ Shawnee National Forest.

Calling themselves eco-warriors, the Fairview Freedom Fighters reclaimed the logging road and designated it as a trail. Due to the nation-wide pressure of their actions, on September 5th, the 7th U.S. Court of Appeals in Chicago, issued an injunction ordering an immediate halt to logging pending judicial review of a lawsuit brought by the Regional Association of Concerned Environmentalists (RACE).

Even though the U. S. Forest Service (FS) attorney was notified of the court injunction on the morning of September 5, logging continued throughout the day. Armed Forest Service personnel from Illinois, Missouri, Indiana and Ohio allowed loggers to continue cutting while members of the press were denied access to the prohibited tree slaughter. Logging finally ceased the following day.

Six protesters were arrested the previous day for trying to stop heavy equipment from entering the Fairview area. John Wallace, IWW-EF! Local 2, wanted in Federal Court for entering a closed area of the forest the week before, turned himself in to authorities with a kryptonite bicycle lock around his neck attached to the hand rail of a logging skidder. Wallace was handcuffed by FS Special Agent Phil Kuntz and then had a heat-reflective fire shelter blanket draped over his head while an FS agent used an acetylene torch to remove Wallace from the machinery. Wallace sang “God Bless America” during the fiasco.

People present reported that the FS used excessive force in the arrest of the non-violent protesters who have been occupying the Shawnee Forest in solidarity with the Redwood Summer campaign in California. Other arrests would have occurred but were prevented by the intervention of bandana-masked protesters who practiced the art of un-arrest.

Tensions ran high the morning of the arrests as FS agents moved in to keep surveillance on the blockade, and support an armed contingent of civilian lackeys who were guarding the logging skidder about a half a mile away. At approximately 4 a.m., Fairview Freedom Fighters snuck to their cars and turned their lights on the FS police while a tape of “The Sex Pistols” blared through the speakers of an EF! school bus from Chicago.

At daybreak breakfast was served to the assembled FS agents: dog food in bowls. The FS declined the free nourishment.

Since the first day of the blockade the eco-warriors have defiantly questioned authority with mirth and much rowdiness. To further the cry that freedom is not asleep, one summer day the defenders, sans clothing, declared war on the United States in a tribal mud dance. Naked warriors frolicked and reveled in squishy earth while drums and the sounds of anarchy resounded.

All summer long the Fairview Freedom Fighters brought the forest’s message to the people by a variety of means, including visits to FS district ranger stations, and even planting a 1962 Chevy Biscayne in the logging road.

The FS was not amused by any of these hijinx, but support from the local populace was overwhelming. The base camp received monetary support, organic food, water from a local water hauler, much deserved beer, home-baked bread from octogenarians, and even the use of a pond. Rather than an opposition force, local residents furthered the strength of the occupation against the government and the corporate greed of the timber industry.

While the timber industry and southern Illinois politicos have spouted that logging helps the people in the Shawnee, they neglect to mention the fact that most of the timber rape is done by out-of-state corporations. The largest offender of the Shawnee ecosystem is East Perry Lumber Company of Frohna, Missouri (linked to a German consortium that manufactured chemicals for the Nazis and was recently involved with worker lockouts in Louisiana’s Cancer Alley.)