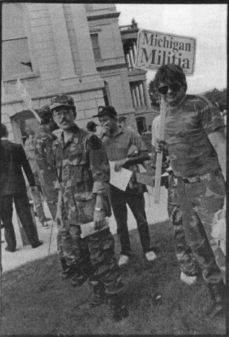 We live in a world where television announces what is important and solemnly pronounces how loyal citizens are to respond—patriotism: the Gulf War; mourning: the death of the war criminal Nixon; joy: the Olympics; or indignation: the Oklahoma City bombing. The public is inundated with carefully selected images, which are dropped as soon as they fulfill their function of affirming the ruling scheme of things.

One FE correspondent wrote us soon after the horrific bombing in Oklahoma City saying the event “would leave an indelible mark on the American psyche.” It’s doubtful that anyone other than the residents of that city will remember it with much intensity beyond the next spoon-fed media spasm. Attempting to invoke a faded issue is like a TV rerun—it may be capable of still evoking some emotion, however reduced, but it is devoid of the official affirmation which gave the spectacle its initial power.

If the images do remain at all, they will more likely haunt those of us who have reacted to similar massacres and bombings across the world. Massive bombing death tolls with scenes of burnt, dead children are commonplace in Iraq, Lebanon, and El Salvador, often initiated at the behest of the agencies housed in the Oklahoma City federal building. We grieve for the children of Baghdad and Beirut as well as those in the American city, but the perpetrators of the Oklahoma bombing weren’t reacting to distant slaughters, only to a select few which fit their political ideology.

Oklahoma City was, in the words of Malcolm X following the assassination of John F. Kennedy, “the chickens coming home to roost.” It was an act of calculated revenge for an official atrocity against other innocent adults and children. Still, we should have nothing but condemnation for the twisted right-wing brains which concocted this monstrous act as retribution for government deeds, real and imagined. The agents of repression who were headquartered in that fragile glass box in Oklahoma City—the FBI, ATF, and DEA—caught less of the falling brick and flying shards of debris than did employees of the Housing and Urban Development (HUD) agency and the federal credit union, to say nothing of the children who perished. Maybe the bombers justified the scattergun attack with the rationale that the deadly government assault on the Branch Davidians in Waco, Texas recognized no distinction of age or position either. The Oklahoma City bombers could have set off their 5,000 pounds of fertilizer and fuel oil at night, in the manner of the unknown persons who destroyed the French consulate, June 17, (harming no one) to protest France’s resumption of nuclear tests in the South Pacific. McVeigh and his buddies obviously wanted to rip flesh. Whether or not there was direct involvement, it is clear the perpetrators came out of the extensive network of heavily armed militias, neo-nazi and Klan formations, and the violent wing of the anti-abortion movement. The personnel and ideology of these intertwining protofascist groups have coalesced to the point where they now constitute a coherent and dangerous movement. Only a few years ago they were found only on the extreme fringes of society. The zine Extraphile (POB 5585, Arlington VA 22205) reminded us of Georges Bataille’s comment that if you give a Christian a gun, you’ve got a fascist.

It is a curious phenomenon to hear talk by some people who should know better, that these whackos possess a kernel of radicality in their opposition to the government. These observers have to ignore the right-wingers’ paranoid fantasies about the New World Order, weather manipulation, and a UN takeover of the U.S. (this by an armed force which can’t even defend itself in Bosnia and has always functioned as an instrument of U.S. policy) to elevate them above the level of common fascists.

Rebellion is not exclusive to the left. Hitler, Mussolini and Franco were all “rebels” against the established order and their followers considered themselves “revolutionaries.” Right-wing squawking about “our rights being taken away” usually means they can’t fill in wetlands, or range their cattle through federal land, or own machine guns. When you press them for what recent group of rights are being eroded, little substantive is forthcoming. Certainly they offer nothing that involves an understanding, let alone a condemnation, of the basic elements of capitalism, industrialism, patriarchy and racism.

Ultimately, theirs is a pseudo-rebellion which begins and ends on the same social terrain. An equation of it with the traditions of classic anarchism or modern libertarian revolution is specious and pathetic—a desperate gesture on the part of some leftists who see any criticism of the government as “hopeful.”

Also, some anarchists and leftists appreciate the militias as being an armed opposition, as if their fetishistic, phallic worship of weaponry is not only admirable, but could be militarily effective against the government. Psychopathology aside, it is tactical idiocy to think these armed bozos could stand up to the 82nd Airborne.

Beside the fact that the government is currently no more or less tyrannical than usual (perhaps even less so today if one looks at periods of repression—native genocide, the 1930s and 60s, etc.), waving guns around and forming militia and guerrilla training camps is something the government will only permit the right-wing to do. Set up a left-wing, black or anarchist equivalent and see what happens.

As it is, armed opposition by leftists has a poor track record in this country in modern times. From the anarchist bombers and assassins of the early part of this century to the Weather Underground of the 1970s, acts of terror have done little more than assure the destruction of the radical groups involved and usually only gain sympathy for the target. As can be seen in the Clinton 1984-ish Anti-Terrorism Bill, the government uses acts like the Oklahoma bombing as an excuse for increasing its repressive powers.

In another example, the so-called Unabomber has carried out a campaign of mail bombings over the last 17 years, causing several deaths and numerous injuries among people working in genetic engineering, computers, and most recently, a publicist who promoted destruction of old growth forests. After identifying himself in a letter to The New York Times as an anarchist (Berkeley, California’s Slingshot, said, “Thanks a lot, asshole.”), over 100 agents were assigned to the Oakland, Calif. FBI office to look for the Unabomber. And, guess who they’ll be checking out.

In a May 7, 1995 article about the Unabomber, entitled “Prominent Anarchist Finds Unsought Ally in Serial Bomber,” The New York Times interviewed radical theorist and sometime Fifth Estate and Anarchy contributor John Zerzan. After a confused presentation of anti-industrial ideas and goofy descriptions of John, the article ominously fingered the locus of the movement as being in “Oregon and Northern California [which is] dotted by a number of anarchist bookstores and reading rooms.” Since Earth First! activists have already been under severe physical assault, this type of publicity only sets the stage for legitimizing more attacks on them and others associated with radical environmentalism and anarchism.

For all its horrors, industrialism can’t be destroyed by a lone individual offing replaceable operatives of the machine. Whether s/he bombs or publishes in The Times or Penthouse, the Unabomber verges on being just another blip in the media. The key is to turn around the daily collaboration with capital of millions of people—a much tougher prospect.