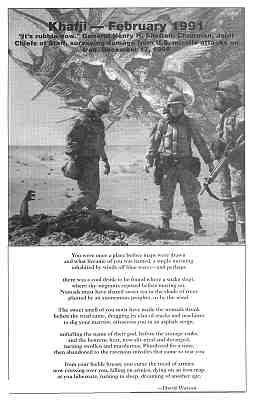 You were once a place before maps were drawn

and what became of you was named, a single morning

there was a cool drink to be found where a snake slept,

where sky-migrants reposed before moving on.

Nomads must have shared sweet tea in the shade of trees

planted by an anonymous prophet, or by the wind.

The sweet smell of you must have made the nomads drunk

before the road came, dragging its clan of trucks and machines

to dig your marrow, crisscross you in an asphalt script,

unfurling the name of their god, before the storage tanks,

and the benzene heat, now slit-eyed and deranged,

turning swollen and murderous. Plundered for a time,

then abandoned to the ravenous missiles that came to tear you

from your feeble breast, you curse the tread of armies

now crossing over you, falling on armies, dying on an iron map,

as you hibernate, turning in sleep, dreaming of another age.