For new subscriptions, renewals, donation, or other business matters, please continue to use our old address at Fifth Estate, 4632 Second Ave., Detroit MI 48201. 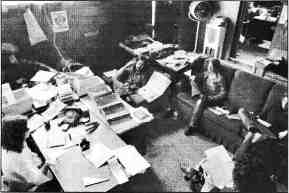 We can be reached by e-mail at fifthestatenewspaper@yahoo.com. Please use this for single messages only. DO NOT put us on lists as each of us as individuals receive more than we can deal with, as it is.

The good news is that you are reading a new issue of the Fifth Estate newspaper. The bad news is that this is the first edition we’ve published since November 2000. Over the last five years or so, regular readers have grown accustomed to explanations for our irregular printing schedule, mostly having to do with the demands of jobs, family, and a shrinking staff.

Often, we were months overdue. This ongoing crisis took on more severe proportions recently, to the point that for a while it seemed to threaten the existence of this publication which celebrated its 36th anniversary last November. We were beginning to fear that the last issue you received might have been, in fact, the last issue.

Articles and correspondence simply languished in our office, which began to serve as a rather expensive mail drop rather than the vital center of work, book sales and meetings that had marked it in the past. Nothing was done on the issue in progress until a few months ago, meaning several articles, written in early 2001, such as reflections on the 2000 election farce were hopelessly out of date.

But, there’s more good news. Sunfrog, a member of Pumpkin Hollow, the anti-authoritarian cooperative in rural Tennessee, has agreed to coordinate a new editorial collective for the paper which will work closely with those of us in the Detroit group who will remain active in the project.

A frequent Fifth Estate editorial contributor, and previously a valued staff member when he lived in Detroit, Sunfrog will be the person responsible for meeting publishing deadlines, something our Detroit staff has been unable to do for nearly a decade. He also will add to the publication’s editorial content.

Sunfrog and comrades in Tennessee currently publish several publications, Black Sun, A May Zine, and All HallowZine, demonstrating their ability to take on this task. This key role will begin with a Summer issue due out in early June. The address for the FE’s new southern staff is c/o Sunfrog, PO Box 6, Liberty, TN 37095. Queries, manuscripts, and donations of fair-traded coffee are welcome.

Essentially, the Tennessee collective will facilitate content and layout with a supporting editorial role played by those of us in Detroit who will similarly write articles, design and lay out pages. Also, others, such as Allan Antliff and his coworkers in Edmonton, Alberta, who contributed several pages of layout for the current issue, will continue to provide articles in this manner. On an agreed upon deadline date, the pages will be assembled in Detroit and sent to our printer who will publish the issue and mail it.

Done. So, it lives, as the horror film screamed. Our fears (and the reports) about the demise of the paper were premature, so please continue to support this publication in the manner so many of you have in the past.

More bad news is that we are giving up our office after 15 years. This is a disagreeable development since Fifth Estate offices have been a public radical space (a Permanent Autonomous Zone in Hakim Bey’s words) for decades. Still, a recent fifty per cent rent increase by our longtime, supportive and generous landlord has made the little used space unsustainable.

Our business address will remain the same but function only as a mail drop and pick up. All business related correspondence, subscription requests and renewals, letters to the editors, as well as donations should continue to be sent to us at 4632 Second Ave., Detroit MI 48201. Manuscripts, art and photos may be sent to either or both addresses.

Unfortunately, losing the office space means disconnecting our phone number of almost 35 years and instead (apologies to some of you) replacing it with an email address. Our email address is fifthestate newspaper@yahoo.com. Send us individual messages relating to the operation of the paper, but please don’t put us on any lists. We all get enough email. Thanks.

There have been previous short periods when the paper has been without an office, and we’re hopeful that circumstances will allow for our re-establishment in a public venue once again, particularly if it’s demanded by the emergence of a mass-based movement that is contesting the state and capital.

We will also give up our book service unless we can get a volunteer to continue the project in Detroit or Tennessee. We’ve distributed thousands of titles since we began selling radical and anarchist books in the 1970s, but now much of what we offer is available easily from projects like AK Press, 674-A 23rd St., Oakland CA 94612, www.akpress.org, or Left Bank Books, 92 Pike St., Seattle WA 98101 (each publishes an impressive catalog of titles), as well as at other local stores and info shops.

Leaving our office space of so many years has filled many of us in Detroit with the distinct feeling that an era is at an end. In many ways it is, but the promise of regularly appearing issues with a new energy makes us enthusiastic about the future for what the Labadie Collection has designated as the longest running, English language anarchist publication in American history.

Now for those foreign language publications.