In 1936 Spain
A New World Was Possible

Discussed in this article: 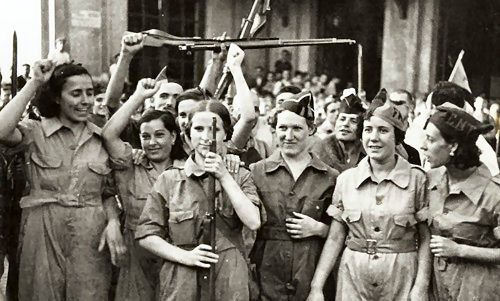 Mujeres Libres in the Spanish Revolution

The first time I heard the slogan that adorns our front page, “Another World Is Possible,” was during the Nov. 17–18, 2001 demonstrations which I attended with several other Fifth Estate staff people at the Ft. Benning, Georgia, School of the Americas.

But those of us living in the modern era of the mega-state and global capitalism have to be at least somewhat whistling in the dark to affirm the notion that a change of revolutionary definitions could occur in our lifetime. Our forces seem so inadequate against those fielded by power and greed, that many of us push ahead more out of ethical imperative rather than a sense of historical destiny.

But history is not without its examples of how ordinary people can not only change their own lives, but that of an entire society. The most dramatic representation of this process was contained within the few years of the successes of the Spanish Revolution at the end of the 1930s.

To be sure, contemporary society is much different and more complex than Spain, but to read the account§ and see photos of an entire society of ordinary men and women who overthrew a whole rotten, corrupt, violent, social order and replaced it with revolutionary ideals that worked in practice has inspired two subsequent generations to believe that, indeed, another world is possible, even given revolutionary Spain’s ultimate defeat by an unholy alliance of fascists, communists and the liberal democracies. (See Objectivity and Liberal Scholarship by Noam Chomsky, with my introduction, available from Black & Red for details of the betrayals.)

José Pierats’ wonderful and detailed history of the people and the revolutionary labor organization, the CNT, that was part of what brought The Ideal to fruition should be required reading for anyone who poses the opening slogan as a question rather than a statement.

The Meltzer Press (to which I am grateful) provided a mini-review of this title by Prof. Paul Preston, Principe de Asturias Professor of Contemporary History, at the London School of Economics, so I will gladly defer to him to finish this, although I have a further note at the end.

José Pierats’ The CNT in the Spanish Revolution (3 volumes) is the most detailed history to date of the million-strong revolutionary trade union, the CNT, and of its grassroots supporters, who, in July 1936, embarked upon the most far-reaching of all twentieth-century revolutionary experiments.

It is the history of the giddy years of political change and hope in 1930s Spain, when the so-called “generation of ’36,” Peirats’ own generation, rose up against the oppressive structures of Spanish society. It is also a history of a revolution that failed, crushed in the jaws of its enemies on both the democratic-left and the reactionary right.

Containing a bounty of original documents produced by the trade unions, revolutionary assemblies and rural and industrial collectives of the 1930s, many of which are unavailable elsewhere, the book explores the new social, economic and cultural arrangements that were introduced in the streets, fields and factories of republican Spain, a history which has frequently been lost within the history of the Spanish Civil War.

Jose Peirats’ The CNT in the Spanish Revolution is a landmark in the historiography of the Spanish Civil War. Without it, the role of anarchism in that conflict could never be reconstructed. It is effectively the official CNT history of the war, passionate, partisan but, above all, intelligent.

Its huge sweeping canvas covers all areas of the anarchist experience—the spontaneous militias, the revolutionary collectives, the moral dilemmas occasioned by the clash of revolutionary ideals and the stark reality of the war effort against Franco and his German Nazi and Italian fascist allies. Originally published in Toulouse, France, in the early 1950s, it was a rarity anxiously searched for by historians and others who gleefully pillaged its wealth of documentation.

These new volumes are accompanied by superb introductions and detailed notes supplied by Chris Ealham. The notes are fascinating, full of erudition lightly worn. Not only do they turn the volumes into a splendid aid to research, but the astonishing tale of starvation, prison and exile that lies behind the saga of the book’s completion is compellingly readable and a minor classic of historical reconstruction.

Paul Preston ably summarizes the excitement available to the reader who is either new to the events of Spain or those long familiar with its admirable history.

The accompanying photos are almost worth the price of the book for in them one sees the human face of a new society. Men and women often beaming proudly at the camera, realizing what they have accomplished.

Returning one more time to the opening slogan: It was posed somewhat differently during those days by anarchist militia leader Buenaventura Durruti during an interview with a reporter from the Toronto Star cited in the Peirats book: “We are going to inherit the earth; there is not the slightest doubt about that.... We carry a new world here, in our hearts. That world is growing this minute.”

Is a new world possible?